With inventive burgers and a whiskey-focused bar menu, Burger Punk crowd-surfs into The Paseo Arts District. 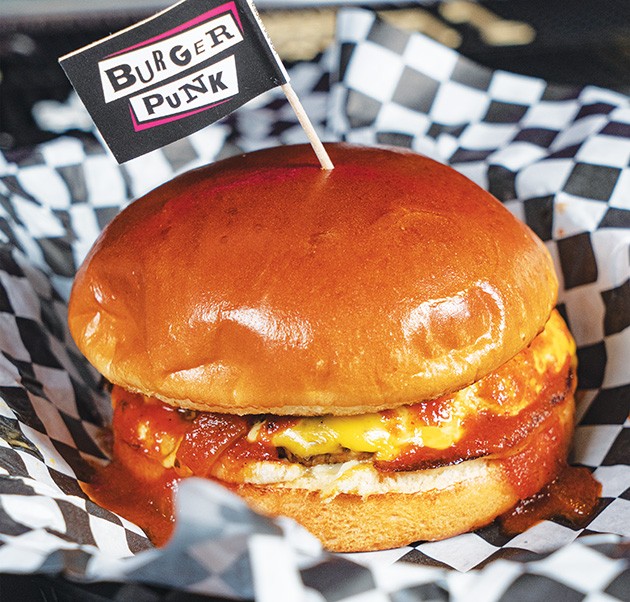 The same aesthetic that made Burger Punk the most unique food truck in Oklahoma City is applied to its brick-and-mortar location in The Paseo Arts District, which opened for lunch and dinner the last week of February.

The truck’s black finish was applied to multiple black textures and finishes — from leather bar stools to skull wallpaper — and its signature pink Mohawk is transported to a neon light over its bar, which houses the most expansive whiskey list in the city as a whiskey-only selection.

Group CEO Rachel Cope said she was pleased with the truck’s reception after running it in the heart of Oklahoma City at places like Stonecloud Brewing Co and The Bleu Garten. She contacted the landlord for Burger Punk’s location, 3012 N. Walker Ave., about other business when they asked if she was interested in taking over the space formerly occupied by The Root.

“The trickiest part behind the bar, there was the walk-in that had stairs that went underneath, barely tall enough to stand up in, so it wasn’t really usable,” Cope said.  “Then upstairs, where the pool table is, the ceilings were really high, but you wouldn’t notice now because we have a drop ceiling in there now. We tore it all out and filled it all in and paved over it. Now it’s the kitchen area.”

Cope said the restaurant’s identity came together as the construction process started in late 2019. The neon light over the bar is an homage to Los Angeles’ Viper Room, but they made it pink to coincide with the Mohawk on the Burger Punk truck.

“We didn’t want to go too gimmicky punk with it,” she said. “We wanted it to be something that didn’t look like it was trying too hard but could definitely tell it had some of those elements, whether they were subtle or not.”

Andrew Eskridge developed Burger Punk’s initial menu on the truck, but after he left the restaurant group to take a job with U.S. Foods, Cope tapped Tom Woolly — formerly of Picasso Cafe — to finalize the brick-and-mortar menu at Burger Punk and oversee the kitchen at Revolución.

“When I first came and looked at the [menu], I was thinking about poached pears, prosciutto and Brie and thought it was maybe a little too much,” Woolly said.  “We wanted a diner, great burger and something that is memorable and sticks with you.”

He said the group tried burgers from around the city and regionally to get a sense of what to add to the menu. The Clash ($10), OG Punk (American cheese, house dill pickles, lettuce and Punk Sauce, $8), Velveeta Underground (liquid gold cheese sauce, sliced habanero and crispy onions) and the Green Daze (same as the OG Punk by with a Beyond Meat plant-based patty, $11) remain on the menu from Burger Punk’s food truck menu, as do its signature crinkle-cut fries and a Punk Shake made from Tillamook vanilla bean ice cream topped with miso caramel and Butterfinger crumbles and dusted in gold.

Woolly and staff added a Hatch chili burger ($10), which tops the New Mexico chilies with housemade ranch and American cheese. They also added their version of an Oklahoma classic, the Theta burger, but substitute the traditional hickory sauce with Woolly’s creation, Evil Barbecue Sauce.

“I created the Evil Barbecue Sauce, which is a play between barbecue sauce and hickory sauce,” Woolly said. “It’s a little spicier, a little vinegar and based off of a South Carolina mustard sauce even though there is no mustard.”

Woolly also developed a chili for the restaurant that gets his name added to the menu where it can be ordered atop a burger, fries or as a standalone bowl or cup. He said the key is using high-quality tomatoes that provide acidity to cut through cheese and fat. It’s served with Oklahoma City-made Seikel’s gold mustard.

“We cook it down ahead of time so that we’re not eating chili that was made that day; it’s been made 24-48 hours ahead so it has time to blend together and do its own thing,” Woolly said.  “Normally I’d put beer, chocolate and coffee, kidney beans and all kinds of things, but this chili didn’t need it. We started with good meat, great tomatoes and went from there.”

Its liquid gold cheese sauce is served on Mosh Pit Fries and serves as the base for macaroni and cheese made with local Della Terra rigatoni.

Ryan Goodman, 84 Hospitality Group beverage director, admitted that it was a little intimidating at first when Cope asked to develop an entire cocktail and spirit list using only whiskey.

“We wanted to build that list out of flavors people wouldn’t expect out of whiskey to show that you can make a daiquiri with whiskey and some stuff that you wouldn’t think about,” Goodman said. 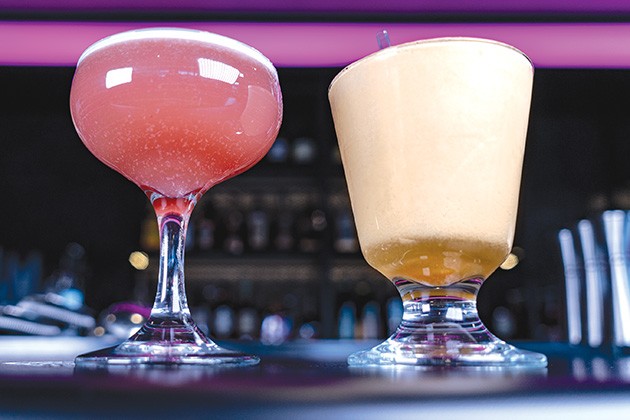 The initial list includes 65 selections of whiskey with room to grow. Goodman said they focused on a lot of smaller distilleries making good product in addition to classics like Basil Hayden, Crown Royal and Woodford.

“We wanted American whiskies that might not be well known,” he said before highlighting Tom’s Town from the Kansas City area.

There are nine whiskey cocktails that include Rock the Cashbah with lemon, floral elixir, Larceny bourbon, Byrrh and egg white ($9) and Turbo!, which is a slushie made with cold brew coffee, coconut cream, Evan Williams Bottled-in-Bond, xocotatl bitters and vanilla.

“It’s got two of my favorite things in it, cold brew and whiskey, so it’s a pick-me-up and mellow-you-out at the same time,” Cope said.

The opening of Burger Punk comes at a busy time for 84 Hospitality. Cope has been in Tulsa overseeing the opening of an Empire Slice House location, and partner and executive chef (Gorō Ramen and Gun Izakaya) Jeff Chanchaleune became the first chef in Oklahoma City to receive a regional James Beard nomination as the organization announced he is among 20 chefs to be named semifinalist for best chef in the Southwest region (Arizona, New Mexico, Nevada and Oklahoma).

“It’s something we’ve always talked about and hoped that would happen, but Oklahoma just gets kind of passed over,” Cope said. “Jeff is an easy target for it because he’s so unique and looking forward to seeing what happens next.”

Finalists will be announced March 25.