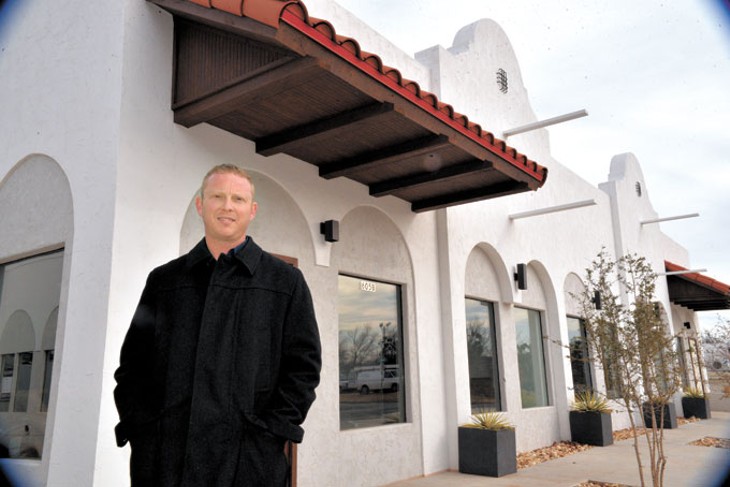 Pueblo at Paseo, a mixed-use development with nine retail spaces, is the first business construction in the district in nearly a decade, said its developer Jeremy Foraker.

The development is comprised of three buildings, and the upper section that includes six 300-600 square-foot small studio commercial spaces opened last September, but its storeowners have been patiently awaiting the opening of a pair of restaurants, which they hope will generate more foot traffic to the area.

“Not many people know we’re up here,” said Cindy Cornelsen, owner of Smash Bangles, 607 NW 38th St., Suite F. “Once the restaurants open, I hope it will help to be a better barometer of how well I’m really going to do.”

Cornelsen makes her own jewelry and uses the space to showcase art and other gifts made by Oklahoma artists. Foraker designed the building to provide affordable retail space for people looking to open their first brick-and-mortar locations. Cornelsen is paying $725 rent per month, which is slightly higher than other gallery spaces but something she chalked up to new construction.

“It’s a dream come true, and I’m incredibly lucky to be here to showcase other people and hopefully do something for the small-art community in OKC,” Cornelsen said.

Cornelsen’s visibility concerns should be somewhat assuaged with the opening of popular Norman restaurant Scratch Kitchen & Cocktails at the end of this week in the Pueblo, only a few feet away from her store. Other tenants in the building include photographer Eric Bloemers’ EB Gallery, Herban Mother and an office for Braid Creative.

Scratch owner Brady Sexton said he contemplated an Oklahoma City expansion in Midtown a few years ago, and Foraker served as his realtor. Now that Foraker has moved into development, he called Sexton after finishing plans for Pueblo, of which Picasso Cafe owner Shaun Fiaccone is also an investor.

Sexton met his wife in The Paseo Arts District about 10 years ago, and the couple still owns a home in the neighborhood.

“We love the area,” Sexton said. “Scratch doing craft cocktails will go over well as a complement [to other businesses]. We look forward to being part of a community of restaurants that all do better as more people go there to dine.”

Sexton opened a Scratch location in Telluride, Colorado, last month, and the Paseo restaurant will feature a different menu from its Norman location.

“Land is at a premium, and it is hard to scrap a bunch of houses to turn it into a parking lot,” Foraker said. “We added public parking to property, which was a difficult process working with traffic department, but it was a necessity to add as much parking as we could.”

The Foraker Company invests primarily in retail spaces but also some housing in Oklahoma City and smaller communities like Ada and Elk City.

“It’s a passion project to have something in an area that is cool, interesting and fun,” Foraker said. “This is a unique development to put three buildings on one site with an outdoor patio space and small tenants.”

The original design of Pueblo only had two buildings with a driveway connecting Dewey Avenue to 28th Street, but Foraker said the site’s topography, which has a 10-foot drop from the southwest corner to the northeast corner, made that design untenable.

Instead, Foraker designed a third building and dropped it to a lower level, creating two courtyard areas. The third building, a 1,650 square-foot space along Dewey Avenue, had an original coffee shop tenant drop out. Foraker said he’s nearing a deal with a new restaurant that is aiming for a fall 2018 opening.

He said that he is hopeful Pueblo’s two courtyards will become a mingling spot, especially during the Paseo’s monthly art walks and Paseo Arts Festival Memorial Day weekend.

“In a small space, we’ve added nine new businesses,” Foraker said. “Hopefully it adds to the synergy and demand of the neighborhood and fits in with the tenants.”

Foraker is developing seven additional 400 to 700 square-foot suites in conjunction with Fiaccone’s Mexican restaurant concept Frida that has yet to begin construction on the south side of 28th Street.

“The demand [for retail space] has been here, but it’s been pent-up because there wasn’t anything available in the Paseo,” Foraker said.