A local dispensary owner expands his business enterprises with a members-only club.

With the truncated Oklahoma autumn already upon us, cannabis patients will soon be looking for some indoor respite from Mother Nature’s icy fingers that patios and porches cannot provide. Fortunately for them, Club Med Lounge, 1304 Lindsey Plaza Drive, Suite A, is already operational in Norman.

“The model will be a monthly private members only. That’s what I’m trying to get to,” owner Jerry Flowers said. “Right now, we have it available for events, private parties, stuff like that. On game days, I have it open. We’re doing a movie night Friday, and then we’ll do a Halloween costume party towards the end of the month as well.”

For members, the lounge is always open during the normal business hours of UWD and stays open until midnight on Fridays and Saturdays.

“If you’re a member and you come in there, we're going to open it up just for you,” Flowers said.

“The turnout’s been pretty good.
It’s been well received.”
—Jerry Flowers tweet this

There are three tiers of memberships: silver, gold and platinum. The silver package is $40 a month. Members get a T-shirt along with facility use. The gold package is $50 a month and includes a T-shirt, a small locker and the ability to bring a guest. The platinum package at $75 a month includes a polo shirt, large locker, guest privileges and two free hours a month in one of the club’s private rooms.

The interior is set up like a 2,500 square-foot cigar lounge, with a 75-inch television in the main area with couches surrounding it and tables set up for board games and card games, an air hockey table, a couple arcade game cabinets, a dart board and video game consoles. Flowers said members can expect karaoke and bingo nights to be incorporated as well.

There are three private rooms available to rent. They are $25 for the first two hours and $10 for each additional hour.

“They’re good-sized offices with couches and tables inside. Each one of these private rooms has its own smoke eater and then outside in the main area, I’ve got two big smoke eaters that basically filter the air five times an hour or so so you don't walk out of there smelling like smoke, like you’ve been smoking all day at a party,” Flowers said. “The turnout’s been pretty good. It’s been well received. Starting to get some memberships. I haven’t had anything negative about it.”

The lounge is actually part of a larger space that also houses UWD, so there are products available next door, though there are walls and separate entrances to each, which makes the building compliant with Oklahoma laws that forbid consumption of cannabis on dispensary premises.

Club Med and UWD in Norman are just the latest of Flowers’ ventures. He opened the original Urban Wellness Dispensary on NE 23rd Street before splitting off and opening an Edmond location under the name UWD. Norman is its second location. UWD quickly developed Flowers’ reputation as one of the most medically minded dispensaries operating in the Oklahoma City metro.

“When [NE] 23rd first opened up, there was Cannabis Aid down the street; there were a few other dispensaries that were selling at the time, and it was shooting fish in a barrel, so to speak. It was easy,” Flowers said. “But as more competition came on and you see the future, you just see how many licensed dispensaries there are, you have to be able to differentiate yourself and pick a lane. I chose to go the medical route and let everybody else go after the rec with a medical license.”

UWD’s focus has remained strictly medical; it carries a large variety of specialty products like suppositories and tinctures, which are individually formulated to each patient’s needs.

“We do a medical intake. First thing we do is we go through the list of prescriptions that you’re on, make sure we’re not going to have any interactions. Once we get past the safety protocol, then we go on to formulation. We make a five- to seven-day batch. We charge you a penny,” Flowers said. “Three days later, we get feedback. We know how to do the next one and we do the process again. By the third or fourth batch is when we’ve got it down and we’re seeing the results that we want to see from our patients. We have success stories that bring tears to your eyes. It’s a beautiful, beautiful thing. We’ve got a 12-year-old autistic male whose mother comes down from Tulsa that heard about the program. I talked to her the other day. Best summer he’s ever had in his life. He's excelling at school.” 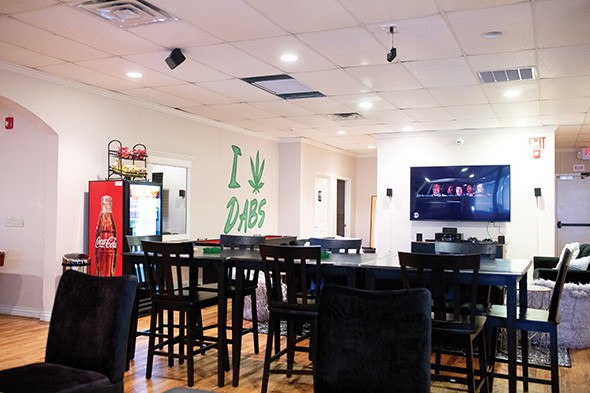 “UWD is my medical side. Dab & Go is my alter-ego,” he said. “Max Patton is a processor. He has a processing company here. At UWD, we carry some of their products. He had the idea of a dispensary that basically concentrated on concentrates. I like that idea because it's a niche program again. It's not like the other stores out here. We've got the largest selection of concentrates in the state, bar none, and at prices that are ridiculous. Instead of just buying one gram at a time, if you like this particular thing, then you can get it in 3.5 grams or 7-gram slabs. Maybe five strains of flower, but all high-grade flower, but the rest is nothing but concentrates, glassware, the main accessories for dabbing, etc.”

“I can’t get enough, and it comes naturally. My interest in the plant came when my mother had pancreatic cancer back in 2012. Thank God she’s still with us. That’s one of the worst ones you can get. Her watching the stories of medical marijuana intrigued me,” he said. “And then when I learned more about the plant and the medical side, I can’t get enough. Taking online classes, going out and visiting with other doctors, learning more. We’re blessed to be in communications with Raphael Mechoulam. We correspond through email. I’ve studied this plant so much and know the potential if we can just crack open the potential of this plant.”