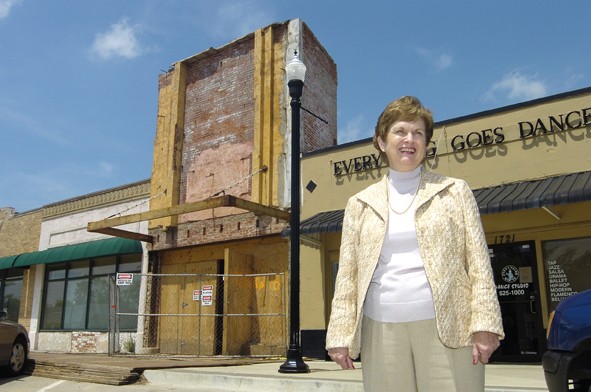 It all began with a season ticket campaign.

A supporter of Lyric Theatre of Oklahoma, Paula Stover volunteered to sell subscriptions to the musical theater company’s upcoming shows in the 1970s.

“I always loved musical theater and plays when I was in high school and at college at the University of Oklahoma,” Stover said. “When my husband and I moved back to Oklahoma, we started going to shows and I began to volunteer.”

Selling tickets was just the  beginning for Stover. Over the past four decades, the Tulsa native has held many Lyric roles, including board president and executive director. When reviewing Lyric’s transformation into a Broadway-caliber theater company, Stover is a leading character. And her legacy extends beyond the stage.

Around the millennium, Lyric made its home in Oklahoma City’s Plaza District, a commercial district on the brink of a comeback after years of neglect.

Lyric board member Lou Kerr suggested Stover and artistic director Nick Demos tour the vacant and neglected Plaza Theatre, the state’s first air-conditioned movie theater from the 1930s. Stover desired a permanent home for Lyric Theatre of Oklahoma’s office, which moved four times over the past decade. Demos wanted a facility to accommodate a year-round theater company. The two saw potential in the abandoned theater.

“Of course, we looked at it and got excited because it was another theater space. I am not sure our board was that excited,” she said. “In cooperation with the city and help from MidFirst Bank, we were able to move into the office and we began the campaign to redo the theater.”

Lyric’s arrival on the 1700 block of NW 16th Street served as a catalyst for revitalization. Often, Susan Hogan — Plaza District executive director from 2003 to 2008 — brought prospective business owners and investors by the Lyric office. Stover and other employees explained their investment in the theater, future plans and how the commercial district was turning around.

Lyric raised $10 million to renovate what would become Lyric at the Plaza and Thelma Gaylord Academy. In 2007, patrons filled the 279-seat theater for Lyric’s first production in its own theater. The new performance space allowed Lyric to add four additional shows each season.

As Lyric has found success operating from the Plaza District, so too have shop and restaurant owners along the block. Plaza Theatre has become a premier performance venue driving the district’s culture and bringing new patrons to the area, said Cayla Lewis, district executive director.

June 1, 16th Street Plaza District Association honors Stover as the recipient of the 2016 Urban Pioneer Award. Stover, Lyric’s managing director, becomes the 12th recipient of the award, bestowed upon those who exemplify a pioneering spirit through their leadership and commitment to urban revitalization.

Stover’s leadership at Lyric, which has experienced tremendous growth since its launch in the summer of 1963, primed her for the honor.

“She embraced our crazy idea to buy a dilapidated theater in the middle of the Plaza District and provided the day-to-day leadership necessary to make it a success,” said Kerr, Plaza board member and a 2006 Urban Pioneer honoree, in a statement. “We should applaud her not only for her contributions to the Plaza District, but for her life’s work as an advocate for the arts.”

“It has worked out beautifully for us,” Stover said of Lyric’s partnership with Plaza District. “We are just thrilled we are down here. The Plaza Theatre has done really well, and we enjoy doing the shows.”

Print headline: Plaza pioneer, After a tour of the rundown Plaza Theatre 16 years ago, Lyric Theatre of Oklahoma’s Paula Stover led the way for redevelopment and inspired others to follow in Lyric’s path.