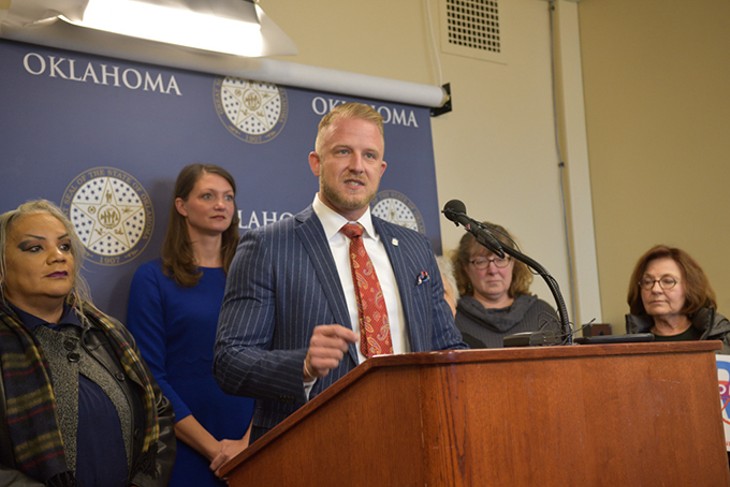 When Collin Walke campaigned to represent a portion of northwest Oklahoma City in the state house, he was asked on doorsteps, “Why are you a Democrat?”

It was a fair question. In recent years, a majority of Oklahomans backed leaders grounded in conservative views. Even in House District 87, which encompasses areas south of Northwest Expressway and neighborhoods east of Warr Acres and Bethany, no Democrat had represented the area since restaurant owner Edward “Sandy” Sanders (1971 to 1986).

When asked about his party affiliation, Walke capitalized on the moment, spouting the values of the traditional Democratic Party.

Now in the second half of his first term, Walke is making good on his doorstep conversations. In January, he filed a series of bills he believes will benefit working Oklahomans. When speaking collectively about the six bills, which include proposals on pay transparency, paid sick leave and increasing the minimum wage to $11 an hour, Walke refers to them as the Oklahoma Values Package.

“Our state motto is ‘Labor conquers all,’” Walke said, referring to the English translation of the Latin phase Labor omnia vincit at an early February Capitol press conference with supporters behind him. “And yet, even though we value labor in the state of Oklahoma, our Legislature has failed miserably in actually supporting the workers of this state. I personally aim to change that.”

In an interview with Oklahoma Gazette, Walke further reflected on his commitment.

“I view myself as wanting to work and help labor,” Walke said. “We’ve seen wages stagnant since the 1970s, and yet we’ve seen corporate profits skyrocket. That’s why I am a Democrat. That’s why I believe in helping the workers in this state.”

The policies Walke pushes aren’t uncommon for a Democrat. The national party’s 2016 platform included raising worker wages and supporting working families. In recent years, his Democrat peers in the House have authored similar measures with no luck.

Walke is not naive to the fact that a majority of his bills are considered long shots in the Republican-controlled House and Senate. However, he sees an opportunity to begin a conversation during a time in Oklahoma politics where constituents want to see action on local issues. While state budget reform, education, criminal justice reform, mental health and public safety might comprise most of the conversation around Oklahoma politics, Walke doesn’t think workers’ rights or gender equality are too far behind.

“The need for pay raises was heard from both teachers and state employees,” Walke said. “The dialogue has focused — and understandable so — on teacher pay raises, which I think is absolutely critical. On the flipside of that coin, state employees ask, ‘What about us?’ The natural consequence of both of this is, shouldn’t everyone receive a raise?”

Walke does have hopes for earned, paid sick leave and pay transparency, often referred to as pay equality legislation. In 2016, a bipartisan pay transparency bill intended to make it easier for women to learn how their wages compared to their male co-workers passed the House and awaited a vote by the final Senate, which never happened and effectively killed the bill on the final day of the session. Walke proposes similar legislation in House Bill 2534.

House Bill 1310, the Healthy Families and Workplaces Act, was filed in 2016 and remains eligible for consideration this session. In its current form, the bill proposes that both private and public sector employees accrue a minimum of one hour of earned paid sick leave for every 30 hours worked, but no more than 40 hours per year “unless the employer selects a higher limit.”

Walke is optimistic about the bill’s fate. While paid sick leave legislation has secured bipartisan support in other state capitols, the bill was assigned a different committee — banking and business — this session. Walke pledges to work with the committee chair, Rep. Elise Hall, R-Oklahoma City, on the bill’s language so it can earn a hearing.

In addition to addressing Oklahoma workers, Walke filed two bills calling for increased revenue in the state. In House Bill 2535, Walke proposes a disclosure requirement for lawmakers who author bills where the language “is derived from an organization, state official or state agency.” Oklahoma lawmakers can and do use language borrowed from other state’s statutes or modeled after proposals from organizations, including from lobbyists.

House Bill 2531 calls for raising the gross production tax on oil and gas to 7 percent, which is a higher than the proposal by the Step Up Oklahoma coalition. The other bill, House Bill 2532, addresses the declining corporate income tax collections, a result of corporations shifting their Oklahoma profits to out-of-state shelters and avoiding reporting in the Sooner State by enacting combined corporate reporting laws.

“If you earn money in this state, you ought to report it to the state,” Walke said of House Bill 2532.