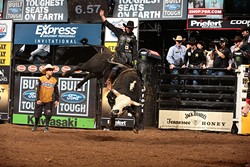 Professional Bull Riders’ (PBR) Built Ford Tough Series (BFTS) is back in Oklahoma as the sport’s top 35 riders will compete Friday and Saturday in the Express Employment Professionals Classic at Tulsa’s BOK Center.

Hulbert’s Ryan Dirteater, a 10-year pro, will be among those competing for a total purse of $140,000 as well as PBR world standing points that count toward the $1 million 2015 PBR World Championship, which takes place Oct. 21-25 in Las Vegas.

Dirteater has also competed in three PBR Australia tour events this year, and he took fourth place July 11 in the 2015 PBR Australia Championship in Sydney. He won the championship round with an 87.25-point ride.

Oklahoma pro L.J. Jenkins, who announced his retirement from bull riding in July during his 11th season on the BFTS, won’t compete in Tulsa. The 28-year-old a fractured his first cervical vertebra (C1) during an event in Nampa, Idaho, in April.

“Even though I would tell everybody, ‘Yeah, I am ready to retire,’ I thought I had another three or four years. Then this happened and it was the reality of, ‘Hey, I am done.’ It kind of hit hard,” Jenkins said in a PBR news release. “I had an awesome career. I can be thankful for all that and be glad I just walked out of there.”

Jenkins qualified for the PBR World Finals 10 times and is the 2006 PBR event average winner. He ranks No. 12 on the all-time earners list with more than $1.8 million in winnings. He has earned seven BFTS wins, as well as 42 top-five finishes, 72 top-10 finishes and 19 90-point rides.

Jenkins had been preparing for retirement for some time, planning on a second career in the stock contracting business. He bought a ranch in Porum, near Lake Eufaula, several years ago and owns about 170 cows and bulls. After his injury, he started buying more bulls and building a stronger bull program that can travel to future PBR events.

Jenkins is also engaged to be married Sept. 24 to his fiancée Christen Dye. Several promotional events will be held Thursday leading up to the Express Employment Professionals Classic.

The Road to Greatness Parade rolls through downtown Tulsa and local celebrities compete in the OK Buck Off, a mechanical bull riding competition, on the main stage at Guthrie Green.

The winner earns $1,000 for their favorite charity. Fans can support the cause by  making donations to the celbrity of their choice at turntulsapink.org. PBR matches up to $2,500.