Pelican’s Restaurant has endured decades of change in Midwest City

Even as the mall’s Sears readies for its planned September closure, Pelican’s sales are rising.

The pub and restaurant tucked in the corner of the mall parking lot eschews a national decline for similar casual  dining eateries like Applebee’s, Chili’s and Olive Garden and instead has become a focal point for Midwest City’s movers and shakers, according to city economic development director Robert Coleman.

“It’s an institution in eastern Oklahoma County,” he said. “You’ll see people from all walks of life in there — senators, city councilmen and regular folks.”

But that hasn’t always been the case. As the movie theater and stores fled the indoor mall in 2009 and 2010, Pelican’s co-owner Jim Dolezel was unsure how much longer he could keep his restaurant open.

He said business declined 35 percent with the loss of late-night moviegoers that often kept the kitchen open past its scheduled 11 p.m. closing time.

“We bottomed out in 2010. I remember thinking, ‘I can’t keep going like this. If it stays like this another month, I think I’ll just close it,’” he said. “That December, things shot up, and it’s just kept going like that. Now our sales are exactly where they were when the mall and theaters were full.”

Originally from southern Michigan, Dolezel said he has operated more than 45 restaurants throughout his career.

He moved his family from Dallas to Midwest City to oversee the Pelican’s property when it was part of the Pelican’s International Corporation franchise.

He bought out the Midwest City store’s franchise rights and now independently operates the eatery with co-owner Tim Thelin.

As he let go of his other restaurant properties throughout the years, Dolezel held tightly to his pride and joy. He enclosed a private dining area in the back of his restaurant with an aquarium coupled with a pair of French doors that Pelican’s uses for parties and meetings.

The owners also began to close a little earlier on Sundays, Mondays and Tuesdays.

“Tim and I scrapped traditional-type advertising and we started going door-to-door,” Dolezel said. “You never tell people that your business is dying; you say ‘Hey, why don’t you have your retirement party with us?’ Just last week, we had 70 or 80 people for the Midwest City High School class of ’77, and we’ll have another group today.”

Many of the patrons that have eaten at Pelican’s since its 1980 opening will recognize its commitment to quality and longtime employees.

Dolezel said he always envisioned creating an intuition-type restaurant where parents brought their kids and they still come back with their own children a generation later.

“We had a couple recently come in that worked at Tinker [Air Force Base] and got transferred to San Antonio 20 years ago,” he said. “‘We used to come in here all the time; it was the last place

we ate. … Is that Judy? She waited on us last time we were in here.’ That’s a neat feeling for people to know who you are.”

It continues with other longtime employees like Thelin, whose mother was one of the eatery’s first employees. Thelin began babysitting Dolezel’s children while in high school.

“One day, [Dolezel] called and said, ‘Do you want a job? Come in with your mom tonight.’ By the time I was a junior in high school, I was pretty much running the kitchen,” Thelin said.

The beer-battered shrimp holds its coating well without a hint of frozen aftertaste because it is never frozen.

Dozelel said the fresh house tilapia is ordered at the highest quality, and it shows with a flavor that is missing from lower-grade fish that usually ends up fried for fish tacos at other restaurants.

Hawaiian chicken, steaks and chicken tenders are other menu favorites that can be paired with a fresh salad bar, and Coleman endorsed Dolezel’s claim that it’s the best in the state.

“When you go to the major chains, they buy bag salads, which you can get at the grocery store,” Dolezel said. “The only way to keep that good is to put sulfites or nitrogen in there. We don’t use preservatives.” 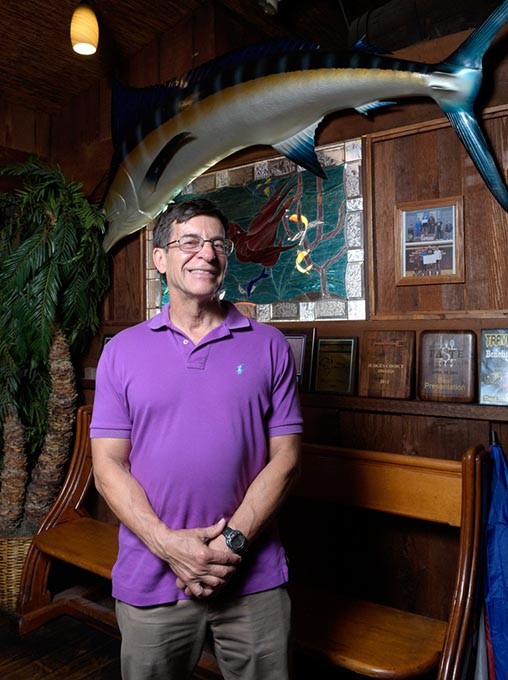 Dolezel said that during a blindfolded taste-test between Pelican’s and similarly priced casual  dining chains, you’d immediately taste the difference in quality.

Midwest City is one of the top cities in the state for per capita retail sales, according to Coleman, who said Oklahoma is one of the top states in the country for fast-food spending, which is a fact backed up with 2012 Intuit Consumer Spending Index data.

“Because it’s a fast-food market, people used to think we were a high-priced restaurant, but then you see the prices Chili’s and Logan’s-type of places have now, and they’re right in line with us,” Dolezel said.  “We don’t cut corners, though.”

Dolezel said Pelican’s sales have increased six percent each of the last two years, paving the way to anchor what the city hopes is a revitalization of the Heritage Park Mall property.

Coleman said the city is working with the property owner to refurbish the site and recruit stores for the indoor mall.

“Obviously, enclosed shopping malls across the country are in decline, but we’re trying to work it out in one fashion or another,” Coleman said. “Pelican’s has done exceptionally well. There are not many restaurants that can survive for 37 years with the same ownership and management. They have a great staff and a very homey feeling. We’ve got a number of mom-and-pops that have survived, but they’re the oldest.”