It takes a while for the audience and characters to reach a state of arousal in Reduxion Theatre Company’s Lysistrata. 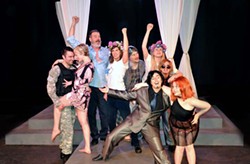 It takes a while for the audience and characters to reach a state of arousal in Reduxion Theatre Company’s Lysistrata, but by the second act, the production rises to about the level of a tween boy’s fantasies while eyeballing lingerie adverts. And who would have thought a play about sex and war could be so cute and sweet?

In this Aristophanes hit comedy from 411 B.C., Lysistrata leads a revolt of Athenian and Spartan women who have grown weary of their husbands being away all the time, fighting the Peloponnesian War. Their ultimatum to the men: No sex until the combatants declare permanent peace. Then they seize the Athenian treasury and block the men from funding more warfare.

Director Tyler Woods begins the play, now at the Broadway Theater, 914 N. Broadway Ave., Suite 120, with some weird choreography, sometimes taking the script a bit literally. When Kalonike (Jessa Schinske, in a voice that makes fingernails on a chalkboard sound like a lyric soprano) says, “It’s hard for women to go anywhere with bending over backwards just to keep our husbands happy,” Woods has her, well, bending over backwards in a feet- and-hands-on-the-floor arch. Some of the fight choreography ranges from the level of a Three Stooges pie fight to professional wrestling.

In the title role, Erin Woods gives an appealing performance as the lead revolutionary. Lysistrata has to use both her feminine wiles and headstrong determination to keep the cause going. She has about as many problems with the women as she does with the men.

The first act is set in 411 B.C., but Woods switches the second act to 2014, where Lysistrata and the women are based on the feminine protest group FEMEN, which was founded in Ukraine in 2008. They are known for topless demonstrations against sex trafficking and other social issues. Thus, the women now wear boots, tight jeans and body paint. The men are in military fatigues or the shiny suits of the Spartan ambassadors that make them look like Mafia wise guys (the first-rate costumes are by Karalyn Merritt). And, they’ve been rendered tumid by a lack of female companionship.

The women are now more demonstrators than revolutionaries. One protester’s sign reads “No Peace = No Pussy.” This protesting goes along with Kyle Gossett’s original score, which sounds as if it’s right out of the 1960s.

Entering its seventh season (young for a city theater company), Reduxion has developed a signature style, as demonstrated in this production. They take some risks and can almost always be relied upon to do quality work.