"Usually when people are too cool, it’s because they’re trying to seem standoffish or cold and unemotional, which is boring to me." 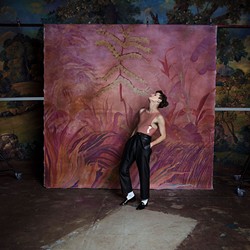 It is hard to imagine someone as amiable or well-spoken as Mike Hadreas suffering with feelings of insecurity, but the Seattle-based art pop act more commonly known as Perfume Genius has made a career out of exploring his inner sense of self.

Both The xx and Perfume Genius are touring off stellar 2017 album releases. The former put out possibly the first great album of 2017 on Jan. 13 with I See You, its first new work in four years. Perfume Genius released poetic and sonically sophisticated No Shape on May 5.

A lot of music from Perfume Genius feels intimate in nature, and No Shape is no exception. Though the album touches on personal feelings of not belonging and dysmorphia, it does so with a tone of firm confidence and maturity. On its sixth track “Wreath,” the artist sings, “Burn off every trace, I wanna hover with no shape; I wanna feel the days go by, not stack up.”

Oklahoma Gazette spoke by phone with Perfume Genius about music and life ahead of his tour stop in Oklahoma City.

Oklahoma Gazette: What’s it like to be touring with The xx?

Perfume Genius: Well, we have our first show tonight, but I’m imagining — I’m projecting — that it will be amazing. I’ve played with them all before and they’re really nice, really gracious people, which makes such a big difference when you’re going to be touring with somebody. I opened for them in Glasgow (Scotland), and I enjoyed it. They have good fans, too. They’re much bigger rooms than we would normally play. And no one is there to specifically see you, which can go bad. But anyone who stands with them (The xx), I think we share at least a tiny thread of kinship.

OKG: Were you a fan of I See You, their album from earlier this year? A lot of people were.

PG: Oh yeah. I’ve been a fan of everything they do. Their live show is really sick, too. Their songs have always been emotional, but on the last album, they were a tiny bit more vulnerable. And, of course, I’m super into that. I’m into people going 100 percent into their emotions, leaving it all out there.

OKG: Is that something you like in your everyday life as well? Do you like it when people put it all out there or you feel like you can really level with them?

PG: I think so. Not that it always has to be dead serious. I just like it when people are open — flaws and all. It puts me at ease — not that I want to talk about people’s dads within 30 seconds. But I feel less judged when people are open or are not trying to be too cool from the start. Usually when people are too cool, it’s because they’re trying to seem standoffish or cold and unemotional, which is boring to me.

OKG: You had your own album this year, which a lot of people loved. No Shape is one of your most confident albums to date, and it exhibits a lot of musical growth. Is that something you were intentionally trying to show?

PG: Well, on every album, I try to push myself or push the way that I write and make things bigger. That doesn’t necessarily mean louder and more complicated, but bigger ideas and bigger risks. I needed to harness my confidence because I wanted to write like I was good. I wanted to take responsibility like, “I’m a musician. I’m a grown person and I’m good at this, so I’m going to write like I am.” I think you can hear that, and that led me to be unafraid to try things or trust myself a little more when I was taking chances or getting out of my comfort zone. It made it more exciting and less uncomfortable.

OKG: Has the way you write changed over the years?

PG: Yeah. I think in the beginning, it was a lot more personal in a really specific way. Like, I was singing a lot about things that had specifically happened to me — stories. Now I think I sing more about ideas or from the middle of feelings instead of about feelings that I’ve already had. I think the writing has become more immediate, which kind of makes it more confusing, because I really don’t have a grip on what’s going on while it’s happening. A lot of my older songs were about me taking things from my past and figuring them out. Now I think I write about things that I don’t really have figured out yet.

OKG: One of the best songs on the new album might be “Wreath.” Everyone has feelings of insecurity, but the idea of the body as a literal prison, not a lot of people can relate to that.

PG: I think you’d be surprised to know how many people do feel like that. Some people you think feel really comfortable in their skin — it’s almost like a stereotypically feminine insecurity to have. But when I actually talk to people about that, that’s not always the case at all. Some people, they think of themselves as very different from the way that other people do and hold themselves to these weird standards. Anybody that I would hang out with has some version of that. Anyone who is super balanced or ultra confident in the way they are is usually someone you do not want to hang out with, in my opinion.

OKG: Like someone who hasn’t examined themselves too closely.

PG: Right. Like, all that fucked-up stuff about a person is usually balanced out with a defense of coping mechanism that’s fun, like humor or compassion or something.

OKG: Does the No Shape concept transfer over to the musical side of things as well? Are outside expectations of what you’re supposed to sound like adverse to you?

PG: I think that’s why it helps to be under a band name and not my own. I can kind of switch depending on however I’m feeling. The next album, I could make a country album or something and no one could tell me that I couldn’t. Not that they could before, but it makes it a little more like a project and not me — even though it is pretty personal and I have to end up fuckin’ talking about myself endlessly. But I write about it, so I can’t get too made about having to talk about it since I’ve made four albums about it.

But even with this album, I deliberately didn’t want to try and keep everything in a certain zone. [Producer Blake Mills and I] were not tied to sitting in a certain genre or reusing certain instruments to make sure it makes sense. I knew it just would, just because it was coming from us.

OKG: Are you interested in making any radical shifts to your sound in the future?

PG: I have no idea. I keep on thinking it’s going to be country next time, but I’m always wrong. Once I sit down to write, it’s always very different from what I thought it was going to be. But I do like not being locked in. Each album I try to do what I did last time but just amped up a little bit. I usually try to do that for a month and it just doesn’t work. Usually what feels more inspired is what feels at least different enough that it’s exciting.

The xx with Perfume Genius and Tycho

Print headline: Not formal, Perfume Genius stresses the importance of openness ahead of his OKC tour stop with The xx.

The xx with Perfume Genius and Tycho