Karin Walkingstick has been making art for as long as she can remember, but she was only able to begin making it a career in her 40s, after she reclaimed a precious resource.

“Time,” Walkingstick said. “I had my son pretty young, when I was 20, and work, you know, I got him through. A friend of ours had heard about a pottery class with Jane Osti — she’s a Cherokee National Treasure. And we took the class as a group and had a lot of fun, and I was hooked from that first class. I really liked Jane, and I really liked the clay, and I had never worked with clay before. … I didn’t know there was an outlet for Native American art. I didn’t know about the art shows.”

Walkingstick, also a member of the Cherokee Nation whose previous art experience as an adult largely consisted of quilting projects and painting logos on children’s desks, won first place in the Emerging Artist category and the online people’s choice award at Cherokee Heritage Center’s 2014 Trail of Tears Art Show. A selection of her pottery, along with works by five other female artists, is included in She Persisted, an exhibition curated by Red Earth Art Center on display through May 28 at Science Museum Oklahoma, 2020 Remington Place.

With the instruction and encouragement of Osti, who was recognized as a Cherokee National Treasure for her contributions to the culture and its preservation, Walkingstick began to create her own pottery.

“I just saw it as kind of a challenge,” Walkingstick said. “Jane would teach me some techniques, and then I would go home and practice those and, you know, ‘What else can I make?’ So I just started making different things to see if I could, and that’s the way it was for the first three years. Next thing I know, I turn around and I’ve made all these different things. ... Of course winning those awards at that show lit a fire under me; you know, ‘Hey this is pretty neat. What’s next?’ So I kept signing up to do the smaller shows around here, and then six more months under your belt, you can learn quite a lot. When you’re hungry to learn, you learn quite a bit in that period of time.”

Lauretta Newby-Coker teaches art to kindergarten through high school students in a Norman public school. A class project suggested by another teacher inspired her to begin creating stained-glass mosaics from found glass.

“I thought, ‘Hey, I think I can just cut my own glass,’ and so that’s what I started doing,” Newby-Coker said. “I go down by railroad tracks or old, old buildings, or they’ve knocked a building down and you just look around on the ground and you’re going to find a lot of broken old glass, really thick, and it will usually have a patina to it from the sun. … Then up in Colorado … we go camping way, way up high in the mountains where they had the mining towns, and so now it’s just kind of like ruins up there. … There’s glass everywhere, so I gather me up a little bit of it.” 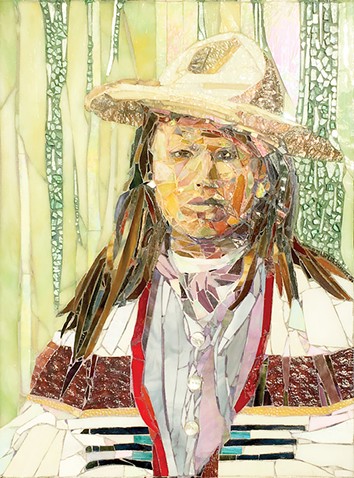 She has her family members  help her gather glass, but the glass she uses is old and weather-worn with no sharp edges. Newby-Coker said her best works reflect her Choctaw heritage. Her favorite piece in She Persisted is not a glass mosaic, but a painting of a mother and child titled “Paying Attention to the Details.”

“There’s such a feeling between them, you can just tell,” she said.

Newby-Coker said the title She Persisted reminds her of the time she spent creating a large mosaic for the Choctaw Nation.

“When I started,” Newby-Coker said, “my husband was alive, and then, in the process of the three months that it took me to do it, he passed away. And I am very, very thankful I had something that I love to do that I think helped get me along. … So help me, when you start doing some art, you start to forget about every problem you have, and you’re just into your art. So you’re stepping away from it all, and it’s wonderful.”

Carol Armstrong teaches painting at Firehouse Art Center in Norman. She said instructing students in different styles and mediums keeps her own artwork fresh and exciting.

“Painting is problem solving, and I am constantly challenged to figure ideas out for myself and with my students,” Armstrong wrote in an email interview. “My students challenge me to be a better painter. I have always said, ‘If you want to learn how to do something well, teach.’ It is very healthy and beneficial for myself and for my students to have this shared experience. ... I am always being exposed to new ideas because of my students, so I continue to grow and change.”

Armstrong said her Delaware-Cherokee heritage informs the tone and subject matter of her artwork.

“The Native Americans are a gentle people,” Armstrong wrote. “They are kind and family-orientated. In my paintings, I want to show the Native American culture, the beauty of the people and their connection with the earth and universe.”

The title She Persisted makes Walkingstick think of Osti’s mentor Anna Belle Mitchell, who also began her art career in her 40s and is credited with reviving the tradition of Cherokee pottery in the 1960s and ’70s.

“When she started it, she really didn’t know what she was doing,” Walkingstick said. “She was kind of making it up as she went. ... Her husband had asked her to make him a pipe, and that was her first goal was trying to do that. ... I didn’t know her, but that’s how I did it too, was just experimenting. And so she did that and did very well with it…. The potters I know who are Cherokee, we kind of look at ourselves this way, as Anna starting at the top, and then Jane after her or your whoever you learn from. … I learned from Jane, Jane learned from Anna Belle, so I feel like a third-generation Oklahoma potter. That’s what I have in front of me as an example, Anna Belle. She persisted, and Jane did too. And I don’t think I’ve ever had a job for over a year. I get bored with stuff, and this is probably the thing I’ve done the longest, pottery. And it’s five and a half years now, so I’ve persisted, too.”