“The inside is so colorful and bright, and that was the mission; we didn’t want a place where you walk in and it’s kind of sad and stark and cold-feeling,” she said.

Founded in 2000, Guthrie-based Pet Angels Rescue, Inc. has adopted out more than 6,000 animals. That number should go even higher once the organization opens its new adoption center in Guthrie in May. The new space will allow the rescue group to take in and adopt out a minimum of 750 animals every year instead of the 400-450 it currently adopts out annually.

With many smaller areas in Oklahoma lacking the staff or space to keep animals, this increase is crucial to reducing the number of animals euthanized every year across the state.

“Sometimes the shelter is operated by a volunteer, and they have very limited funds dedicated to animal welfare, so animals are euthanized at a very high rate — sometimes 24 to 48 hours — and there’s no adoption programs,” said Tiffany Smith, a Pet Angels volunteer who has been with the organization for nearly five years.

The Oklahoma Shelter Statute states that a county must have a human population of at least 200,000 to establish an animal shelter. Of the state’s 77 counties, just three meet this requirement: Oklahoma, Cleveland and Tulsa. Smaller cities and towns, along with many rural areas, simply don’t have the resources to keep and care for animals, but they do work with rescue groups like Pet Angels to find them homes. 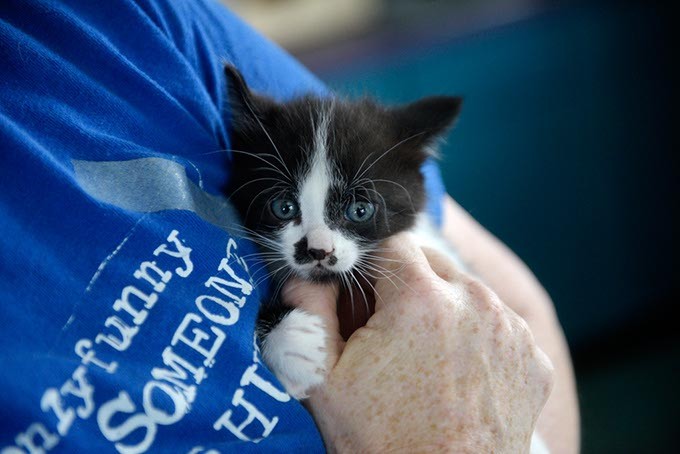 Pet Angels takes many of its animals directly from euthanasia lists at many small shelters across the state.

“Dana knows these dogs, and she knows what situation is going to be best for the dog and the family, because it’s so sad when a dog gets adopted and then they have to bring the dog right back,” Smith said. “How confusing is that for the dog?”

Applicants who rent or lease residences must provide contact information for their landlord so the organization can verify that pets are allowed. The application also includes questions about other animals living in the home, the applicant’s history as a pet owner and the type of living situation the pet is going into, including how many hours they’ll be left home alone. Pet Angels provides necessary medical care, which isn’t uncommon, as some have been hit by cars or have heartworms.It also spays and neuters, vaccinates and microchips all animals before adopting them out.

The Guthrie center features a cat room where they can roam free or cozy up in cat condos. There’s also a vet room, a grooming and bathing room and a kitchen for animals with special diets.

“The inside is so colorful and bright, and that was the mission; we didn’t want a place where you walk in and it’s kind of sad and stark and cold-feeling,” she said.

Pet Angels also works to make it easier for pet owners to care for their pets by partnering with students from Oklahoma State University’s Center for Veterinary Health Sciences to provide low-cost spay and neuter surgeries.

The organization also participates in a program for military members who are being relocated and can’t take their animal with them. Pet Angels is licensed to have 175 animals but typically has 70-80 so it can provide the care and attention they need. Even though the new center will allow the rescue to take in more animals and make it easier to adopt them out, the organization still needs help since it relies on private donations.

Smith stressed that donations don’t have to be cash. Dog food, dog beds, doghouses and other items make it easier for Pet Angels to care for the animals. Volunteers are also always needed, and the organization welcomes individuals and groups alike, including school groups that might want to come in and help care for and learn about the animals.