Spring is here, and the never-ending cycle of changing weather has once again returned to the time of color, freshness and new beginnings. But the neighbor’s yard planters are not the only place where flowers are popping up. Petals and floral designs are also sneaking their way into the trademark flow of artist Dylan Bradway’s work.

Bradway, who can be counted as a godfather of the 16th Street Plaza District art community through the founding of DNA Galleries with his former wife Amanda Zoey Weathers, is preparing for the launch of a new solo exhibition at the gallery space. The untitled exhibit has a free preview opening 6-9 p.m. Thursday at DNA, 1709 NW 16th St. It will have another opening 6-10 p.m. Friday during Live! on the Plaza. The exhibit runs at DNA through May 6.

Flowers have never been a major subject of Bradway’s work, but they played a major role in his upbringing. For many years, his mother crafted unique arrangements for a flower shop she owned.

“I’ve been around that kind of stuff for much of my life,” Bradway said, “but never thought of it as something I would express with, necessarily. But the line work and quality of color seems to lend itself to the mood I’m in lately.”

The solo exhibit will include around 20 new pieces from Bradway, ranging from smaller works to larger paneled diptychs. Some prints and shirts featuring his designs will also be available for sale during the show’s run.

The theme of the show is vaguely about life and exploring new things. The strongest common thread between the works is actually in appearance. Lately, Bradway is focused on incorporating bright colors into his work, which was defined for many years by a more muted palette. He wants viewers to be almost overwhelmed with the color.

“The colors are all very close together,” he said. “I feel like that’s where the life of the work is coming from.”

In the last several years, Bradway’s work clearly leaned toward the surreal. It includes a lot of flowing motion in the line work, often accented with paint drips and bursts.

Floral and organic patterns, it turns out, are conducive to that style. Bradway found they are things that can be incorporated within the work as the artist goes, with lines moving as freely as the course of nature. Petals and ivy patterns can build on themselves and represent multiple different things at the same time.

A lot of Bradway’s work is known for playing mind tricks on the viewer. Even those who have bought one of his art pieces might not recognize all of his hidden Easter eggs for months or even years down the road — which is exactly what Bradway hopes for.

“Over time, there is still some life to viewing it,” he said. “It’s not just like, ‘Well, that’s a red canvas; I got that statement.’”

The new work is an exciting development for the artist who is doing some evolving himself.

“It’s opening up those doors, letting down that guard and letting some newer stuff into my work rather than repeating the same motif over and over and over,” he said. 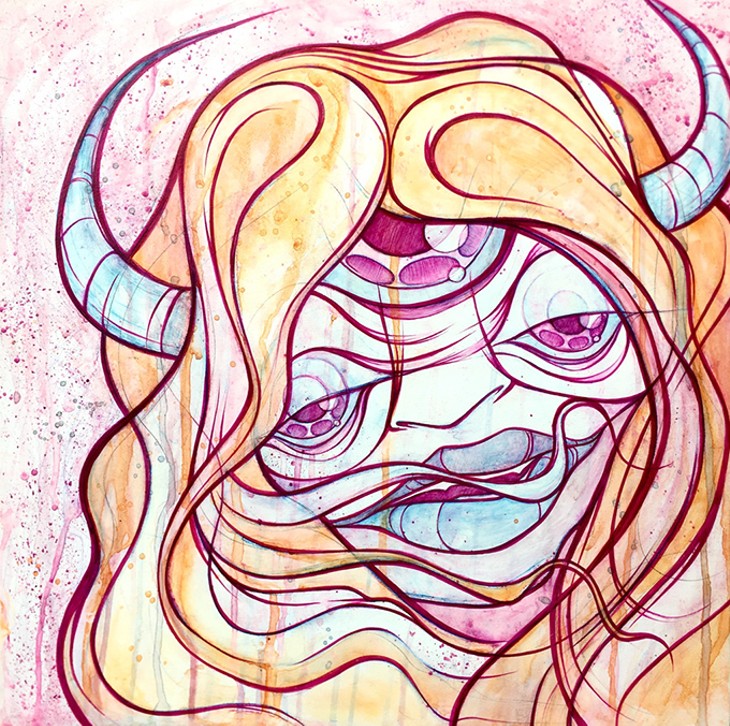 Though Bradway’s solo show is at DNA, neither he nor Weathers currently owns the gallery, which is now run by artist and photographer Lindsay Harkness. Not owning a business in the Plaza, an area he helped revitalize, has been an odd adjustment.

“It’s weird to not be in the district,” he said, “but I’ve been involved here for a really long time, so it’s hard to not continue that with those relationships and community involvement.”

Bradway still has a stake in the Plaza goings-on through his status as founder of Plaza Walls, which curates more than 5,000 square feet of mural space within the district through its Oklahoma Mural Syndicate nonprofit group.

Though he had withdrawn himself from Plaza Walls for a while to focus on other things, Bradway would like to work his way back into the group’s work with fellow co-founder Kristopher Kanaly.

The biggest Plaza Walls event of the year is its annual September mural expo, in which over a dozen artists work over the course of a few days to paint fresh pieces over the mural space. The last mural expo, which included work by Bradway, was sponsored by Google. That partnership had a huge impact on what Plaza Walls was able to offer visiting artists.

That partnership is indicative of a larger mural renaissance occurring around the city. Bradway just finished installing his most recent commission, a six-story, west-facing flower mural on Classen Senior Center, 913 NW 12th St. He is happy the city has not only embraced murals but has largely warmed to the idea of fairly compensating artists for that work.

“That’s great; we need that,” he said. “We need people to understand it costs money to make that stuff happen because that was a hurdle for a long time.”

"The colors are all very close together. I feel like that’s where the life of the work is coming from." — Dylan Bradway tweet this

One could make the case that the Plaza District is entering a new chapter in its history. The district recently announced the hiring of Selena Skorman as its new executive director. DNA has changed ownership, and places like Tree & Leaf have recently closed their doors. There is also a lot that has not changed, but Bradway is a realist when it comes to how the Plaza might look different someday in the future.

“It’s going to be different, for sure,” he said. “I hope it all stays in a similar mindset, but you have to look at things differently in a district once it grows because it’s not the same as it used to be. It gets stuck in people’s minds that, ‘Oh, the Plaza will always be this.’ But, well, maybe not.”

More than a decade ago, Bradway was seen as one of the city’s most promising young artists — a promise on which he has capitalized and continues to build. But a younger generation of artists is beginning to emerge from underneath Bradway and his contemporaries. He is excited to see what comes out of their influence in the future.

“To see the work of people who aren’t even 20 yet — there’s a lot of inspiration and tools out there that all creatives can attain now through the internet,” he said.

Increased interest in local art participation can also be attributed to greater visibility of that art through communities like the Plaza District. Bradway likes how social media and the internet allow artists to connect with and learn from a community much larger than their own while also promoting the area in which they live.

Even as the internet becomes a larger part of artists’ lives, Bradway expects their focus to stay within the local community, partly because they have seen it demonstrated how art can help push a city forward. He loves Oklahoma City’s art direction and would like to see the city continue to invest in art opportunities for years to come.

“I hope that is the case,” he said, “and I hope our city continues to appreciate what’s going on because it doesn’t happen everywhere.”

Live! on the Plaza opening