Photographer K. Yoland explores the border with an expressionist lens 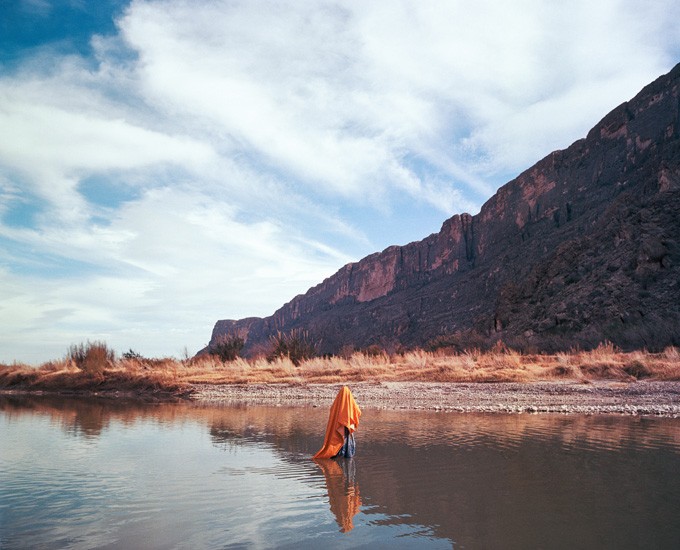 Being 45 minutes from the U.S.-Mexico border inspired Yoland to focus on themes such as nature of territory, land and control. While there, she took several field excursions along the border with border patrol guards, oil industry workers, cattle ranchers and by herself.

“Everyone I’ve met has been incredibly generous with their time, supporting my research and work,” Yoland said. “People do not necessarily have the same relationship to the border or to the land, but they have dealt with me on a very similar, human and equal level, which I found inspiring.”

She was surprised by how similar the two sides of the border often appeared.

“Of course, everyone is legally aware of the border,” she said. “But most of the time, you cannot physically see it, and it almost seems too abstract to make sense of if you live here.”

That initial residency yielded a prior exhibition called Then There Was Land, which focused on how land might be divided or possessed.

Having lived most of her life in big cities, her understanding of land rights was more conceptual until moving to Texas. In the United Kingdom, there is often a right to “ramble” on private land as long as you cause no damage.

“I was struck by the divisions of land ownership which, at over 90 percent, separates people and cultures and potentially isolates or controls them,” Yoland said.

After Then There Was Land, Yoland continued to work in and around Marfa for another 18 months, creating more art that would become Border Land Other.

“This new exhibition takes on the figure and the body as the main focus,” Yoland said. “The landscape is still important in terms of the individuals’ context within the space. Notions of invasion, migration and the alien have started to feature more in the new work, but I still incorporate elements from the earlier show.”

Photography will be featured heavily in Border Land Other. Over the last six years, Yoland has played with the idea of frozen moments, like a still from a film or play in which the person depicted is both a character and a living sculpture.

“For me, there is always a hint at a story or a character in the work,” she said. “My images are often staged, and sometimes the clothes and objects are chosen based on the surrounding landscape or to provide a certain tension.”

Yoland doesn't want to push any one point of view, but she hopes that viewers will reflect on how we approach others and consider the divides, both real and imagined, between each other.

“If the exhibition can make us more aware of those people we have not met and do not know but who struggle in our own communities or other cultures,” she said, “I would feel the work succeeds in its dialogue.”