OU's College of Architecture, the OU Humanities Forum, the African and African American Studies program and the Women’s and Gender Studies program supported the project. 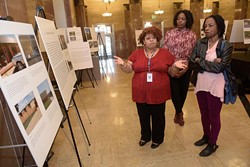 It’s a familiar image to anyone who has ever traveled across Oklahoma City’s NE 23rd Street. A photo of Florence’s Restaurant’s entrance at 1437 NE 23rd St. captures the front end of a customer’s car and the red-and-white barber pole of the neighboring businesses. Tiffani Sanders’ image serves as a testament to the resilience of a community plagued by persistent patterns of economic distress.

“I wanted to focus on the longevity of the eastside that had survived the ups and downs,” Sanders said. “I started at Florence Restaurant, which is one of the longest-running black-owned business on NE 23rd. It’s a staple of the community.”

Sanders takes a deep look into her work, and reflects on the well-known restaurant’s strength, but can’t ignore the decay that has taken place around it over the years. Once thriving businesses and healthy enterprises that represented the fabric of the community, now rest as faded and crumbling ruins.

“People up and left the eastside for a better area, instead of putting back to create better,” she said as she examined her image of an abandoned theater, known as the hot spot for the generations before her. The venue’s closing left a hole in the community for enjoyable and safe entertainment, influencing the culture of the neighborhood.

Sanders is one of 25 northeast Oklahoma City women who used photography to tell the stories of their neighborhoods by archiving history, cataloguing troublesome conditions and documenting opportunities for change. The Women of Northeast Oklahoma City Photovoice Project brought women of all ages, income levels and professions together to share their lived experience in the city’s northeast quadrant, an area that today and in the past has been home to the city’s largest African-American communities. Northeast Oklahoma City has a rich and diverse history. However, the area also has suffered from decades of economic isolation, which made way for blight, high crime and unfavorable environmental conditions.

The University of Oklahoma College of Architecture, the OU Humanities Forum, the African and African American Studies program and the Women’s and Gender Studies program supported the project.

Photovoice is a creative method for empowering people to document their community’s needs and resources from their own experiences, explained John Harris, a College of Architecture assistant professor.

By producing a Photovoice project and sharing it with a wider audience, Sanders and the others become advocates for change in their communities.

“Everything these women and their photographs embodies speaks to much more than abandoned buildings and a forgotten community,” Harris said.

The notion of a Photovoice project for the northeast side first took root in Lusaka, Zambia, a city of more than 2 million people in southern Africa. While leading a service-learning trip, Harris noted the role of neglected houses and crumbling commercial buildings on Lusaka residents and it reminded him of northeast Oklahoma City.

It further developed upon the 2014 arrest of an OKC police officer accused of a series of sexual assaults, targeting more than a dozen African-American women from the city’s northeast neighborhoods. A year ago, Daniel Holzclaw — fired by the police department — was sentenced to 263 years in prison after he was convicted of rape and other charges. During the trial, a victim testified that Holzclaw drove her to an abandoned school and raped her.

Harris and cofacilitators Vanessa Morrison and Gina Sofola asked: Did abandoned buildings and withering properties play a part in an officer’s ability to victimize women in northeast Oklahoma City?

“It caused us to want to take a look at northeast Oklahoma City,” Harris said. “What do women see in their day-to-day life? We wanted to tell the truth to policy makers and for them to see what’s going on.”

Before the 25 women began snapping shots, co-facilitators Morrison and Sofola asked them to identify life-giving community spaces and those that weren’t.

“It was interesting that the park was life giving, but also a concern,” said participant Cheryl Pennington about Washington Park, located at the intersection of NE Fourth Street and High Avenue near the John F. Kennedy neighborhood. “Washington Park is beautiful, but then you realize there is no walking trail, no security and no lighting. It was both.”

“The Photovoice method is designed to do this,” Harris said. “It gives each individual woman the chance to say, ‘These are my concerns,’ tell them to the group and start a really important group dialogue. As you go around the exhibit, you will see these placards. In many instances, it is verbatim or paraphrased of the discussion. Each individual gets their chance, but the collective knowledge is very important.”

As the women canvassed the community, they zoomed in on aspects of their neighborhoods that negatively impacted their safety as well as captured the positive. Next, the group reflected on the images.

In October, Women of Northeast Oklahoma City Photovoice Project debuted at OU College of Architecture Design Center on Film Row. An audience comprised Oklahoma City Council and law enforcement members and nonprofit leaders and developers studied the images and listened as participants told their stories. The exhibit achieved its first goal of enticing dialogue between policy makers, earning the exhibit the second floor of City Hall in downtown Oklahoma City for two weeks in January.

As an employee in the City of Oklahoma City’s Action Center, Sanders saw the crowds during the exhibit’s first week in City Hall.

“It sparked a change within a department,” Sanders said as she described code enforcement officials noting broken glass shards from vacant buildings and overgrown shrubs on unkempt properties.

Powerful photos of broken glass and litter on the grounds of Northeast Academy for Health Sciences & Engineering Enterprise School, located at the corner of N. Kelly Avenue and NE 30th Street, prompted community members to organize a cleanup event, which drew a crowd of 100 people to campus to collect trash and beatify the school grounds, Pennington said.

“There is a perception that people don’t care,” Sofola said. “People do care. They didn’t feel empowered to take a step.”

The dialogue continues as the exhibit earned participants and the facilitators a meeting last week with Ward 7 Councilman John Pettis Jr., who represents the area, and Michael Owens, The Alliance for Economic Development of Oklahoma City community development director.

As participants and facilitators pointed out, northeast OKC residents have played an important role in the city’s advancement and the project has inspired dialogue and action on issues of safety, environment, beautification and quality of life in the northeast quadrant. Also, it has given rise to hope.

“I want to see people move back to the community,” Pennington said as the others nodded. “I want to see families chose the eastside for raising their families. I want to see the schools grow and community beautification.”

Print headline: Common voice, The Photovoice project tells a visual story about northeast Oklahoma City though the eyes and lenses of 25 women.