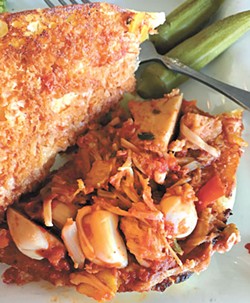 Located in a historic building built in 1928 by Dr. G.A. Nichols, who later developed Nichols Hills and a host of other Oklahoma City neighborhoods, Picasso Cafe has been a casual neighborhood restaurant in the Paseo since 2009.

The location at 3009 Paseo St. was originally a funeral home, but it has been a restaurant since the early 1970s, when a sandwich shop moved in.

Fiaccone has overseen many small renovations to keep the building fresh since opening eight years ago, but it has always been a commitment to lure diners of all dietary regimens that makes Picasso Cafe unique in Oklahoma City. The menu is about 50/50 meat-based and vegetarian dishes.

“We wanted a neighborhood restaurant and bar, and when you do that, you have to open your arms really wide to try and accommodate anyone,” Fiaccone said.

Picasso Cafe is the kind of place you can go with family or a large group and know that there is something for everyone without having a huge menu.

Entrees, sandwiches and pizzas dot the menu, which is overseen by chef Ryan Parrott, who came to Picasso in 2013. The restaurant offers monthly specials for appetizers, entrees and dessert.

For my first visit to Picasso, I wanted to try one vegetarian dish and one meat-based entrée.

The national fruit of Bangladesh, jackfruit is featured widely in cuisine across Southeast Asia.  I’ve heard about it being used as a substitute for pulled pork for about four years, but I’ve never pulled the trigger. Fiaccone said Picasso began experimenting with it around 2013, when they got a bunch of the fruit, which is the largest tree-borne fruit in the world, from Super Cao Ngyuen.

Picasso’s version of jackfruit pulled “pork” topped a ciabatta ($10) bun with the fleshy fruit, sweet and spicy barbecue sauce and pineapple chutney, according to the menu. My sandwich arrived without any evidence of chutney, and the texture of the jackfruit left something to be desired.

Most of the fruit still appeared to be intact, not providing a good analog of the pulled pork texture. I thought the flavor of the sauce was good, equal parts sweet and spicy, but the jackfruit, while tasty in its own right, didn’t meet my texture expectations. It felt kind of like eating a soup on a sandwich, and the bottom slice of bread got so soggy in the sauce that it nearly disintegrated in my mouth.

It turns out I probably wasn’t alone in my experience. Fiaccone said the sandwich did not survive a recent menu overhaul that will make its way to diners within the next week or two. 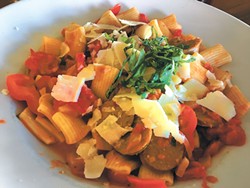 Instead, the jackfruit will be available in versions of vegetarian tikka masala and vegan macaroni and cheese. I think that’s a smart application of the versatile fruit. Vegan mac and cheese, which is offered locally at The Loaded Bowl and The Red Cup, is rapidly becoming one of my favorite dishes. If the barbecue sauce is any indication, I know that Parrott and staff can concoct nuanced flavor, so I have high hopes for the tikka masala too.

On the meat spectrum, I ordered the Italian sauce rigatoni ($13), which covers the local pasta provided from Pasta Pizzaz in vodka sauce, onion and roasted red pepper. The sauce was creamy without being heavy and benefitted from spice from red chili flake and silkiness provided by adding starchy pasta water. The pasta was slightly overcooked, but the sausage was great.

“We get a lot of requests for steak, and we’ve put beef on the menu so many times in different ways, but it’s a small percentage of people that want it,” Fiaccone said.  “The rigatoni is a way to incorporate beef sausage into something more palatable for everyone.”

I enjoyed the atmosphere inside Picasso Cafe, where you’re surrounded by the work of local artists, good natural light and a lounge area contributes to a relaxing vibe. It might irk some to find their only iced tea option is an unsweet version flavored by black currant, but I thought it was nice and provided much more depth than a standard black tea variety.

It appears to be a busy 2018 for Fiaccone, as construction on a long-awaited Mexican concept in the Paseo at the corner of NW 28th Street and Walker Avenue is slated to break ground. Fiaccone is also helping Waffle Champion founder Todd Woodruff open a buttermilk biscuit concept in the new shopping center Pueblo at Paseo. Picasso Cafe’s sister bar, The Other Room, which shares an address, has also undergone an overhaul as it transitions to a smoke-free environment.

What works: The vodka sauce on rigatoni was luxurious and spicy.

What needs work: Its jackfruit didn’t achieve a “pulled” texture.

Tip: Tea is available only in black currant variety.