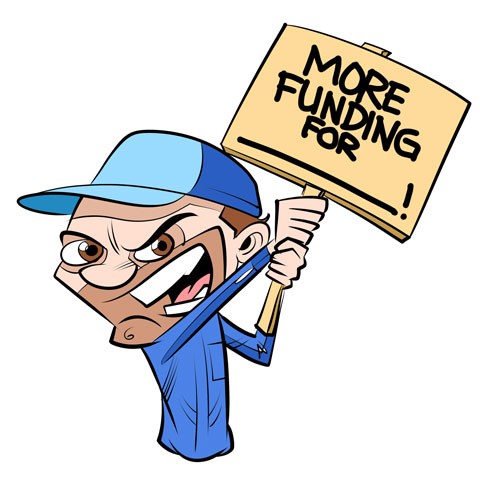 We at Chicken-Fried News couldn’t be happier to see teachers and their allies at the state Capitol grounds, calling on lawmakers to adequately fund common education.

In our opinion, lawmakers shouldn’t be surprised by the large crowds, given that Oklahoma has cut school funding more than any other state over the past decade.

While teachers are raising attention to the black eye on Oklahoma’s education system, we think its fair to wonder how decreases in state appropriations have impacted other state agencies.

What about the Oklahoma Department of Mental Health and Substance Abuse Services? Over the last four years, the Legislature cut funding by $52.6 million, which resulted in an additional loss of $80.4 million in federal funding, according to NewsOK.com.

Have bridges and roads been impacted? The Legislature has taken $840 million from the Oklahoma Department of Transportation to plug funding gaps in other core functions of government.

How are we doing in human services? Well, Oklahoma Department of Human Services saw an increase in state appropriations in recent years; however, its director told NewsOK.com the agency still had to cut $108 million from its budget “because increases in operational expenses have far exceeded the increased funding.”

Well, it sure looks like the state of Oklahoma is in a pickle.

Our advice to teachers is to keep those picket signs handy, as you might need to pass them along to fellow advocates.