Try to keep up with Flock of Pigs at your own peril.

The shaggy college party band Flock of Pigs met at University of Oklahoma, played their first show at Norman Music Festival in 2016 and spent the ensuing years picking up sounds just as quickly as they put them down. Their 2017 EP Swine Flu seems less genre-agnostic than genre-ecstatic, a positive, hyperactive exercise in flinging everything at the wall and seeing it all stick. Rap-rock in jazz time? Sure. Third-wave ska call-and-response? Check. Country guitar licks and hip-hop bars? Why the hell not?

The band plays Aug. 31 at Opolis on the occasion of the release of its new song, “Let’s Go,” and its accompanying music video. I called bassist Patrick Richardson at midday recently, and true to the band’s form, got much more than I bargained for. He proceeded to dial up four other Pigs, and later, we were joined by vocalist Joseph Lee.

Joe mentions going to counseling on “Ode to Ex.” Let’s talk about that. I’m on the older end of the millennial wave. You’re all on the younger end. Do you think you’re more comfortable writing music about therapy and mental health than your predecessors generally were? Because when I was in college, that sort of stuff was mostly reserved for wounded singer-songwriters, not fun, uptempo, fusion jam bands.

Riley Richardson (trombone): I would say on the whole, yes. We’re more comfortable talking about that kind of thing. We’ve all had our own struggles and talk to each other about them.

Patrick Richardson (bass): There’s something very powerful about taking that inside stuff and putting it up on a stage and to do it in front of people. I think it’s good for other people to receive it as well.

Why do you think that is?

Patrick Richardson: It’s something honest and emotional that’s got a groove to it and makes people want to dance. You’re exposing people to tough ideas in a space where you don’t have to deal with the whole weight of them.


Is there a particular songwriter who paved the way to talking frankly about anxiety and mental health?


Whose house did you shoot the “World Premiere” video at?

Patrick Richardson: Wyatt had lived there for two or three years at that point, and we were just on the verge of moving out, so it was an homage to all of the stuff that we did there.

Wyatt Helms (keyboards): We partied a lot in that house, so it’s meaningful to us.

Renfrow: It was about utilizing our independence.

Helms: We called it Rad City.


Whose idea was it to lick the photo of Kim Jong-Un in the “Spooky Song” music video?

Helms: I think that was the alcohol’s idea.

Nick Lovatto (drums): It just came to me. Me and Kim were just hot and heavy in the moment. I had to lick his frame.

Patrick Richardson: We shot that video last year when those tensions were stronger than they are now. There was the possibility that these two crazy people could end the world for all of us and there wasn’t a whole lot that we could do about it. So we might as well treat them as absurdly as we can.


Well, with Joe entering the call, this marks the first time that I’ve ever interviewed an entire band at once.


What’s one album or band that you all agree on?

Lee: We all have some big respect for Kendrick too.

Renfrow: Not so much anymore.

I always kinda got the sense that [Odd Future] weren’t going to age well. 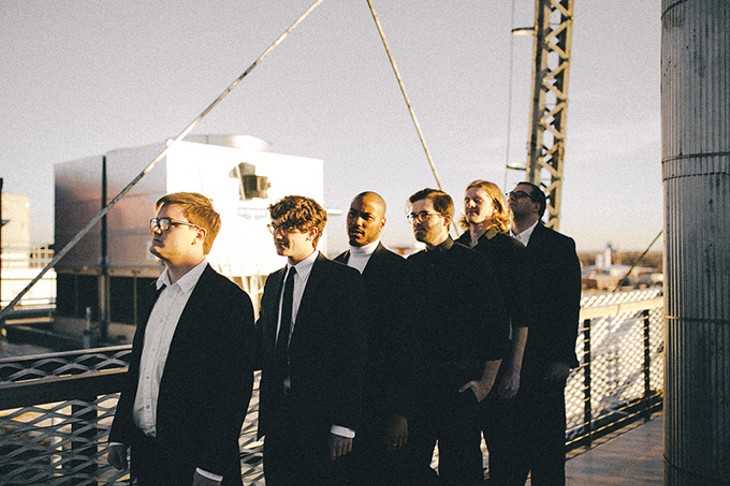 How does it feel now looking back on that stuff that was so brash and childish and ridiculous, having seen some of the really remarkable stuff it has spawned, like the Earl [Sweatshirt] albums and Syd Tha Kyd and The Internet and stuff?

Lovatto: [As if swooning] Ugh, the Earl albums.

Renfrow: When I went to preschool in the car with my mom, I listened to Nirvana and shit. Sorry; I can’t cuss in this interview.

Renfrow: But, you know, as I got older and matured my taste in music did too. I still love Nirvana—

Helms: And now you listen to Primus.

Patrick Richardson: On the Odd Future point, I think that we’re willing to embrace that childish, go-hard, say-anything mentality so long as we’re working hard while we do it.

Renfrow: Musically, as long as we work really hard to perfect the product, that kinda validates our desire to be goofy.


Is there a particular artist who really brings the knives out? Somebody who Flock of Pigs can’t agree on?


Somebody please lay the contours of the Kanye divide within the band for me.

Lee: I’m the big Kanye fan in the band. I’m not really sure, I guess.


Who are the Kanye naysayers?

Renfrow: I am; I don’t know who else is. I just don’t like Kanye. I like some of his songs, I like him as a performer. But as a musician — I focus on the music; that’s my shtick, and I just don’t get that much from Kanye when I listen to him. But as a performer, he’s definitely one of the best of the best. I’m trying not to step on Joe’s toes.

Riley Richardson: Yeah we love working with Trent. All of our professionally recorded stuff we’ve done with Trent. Developing a relationship with him through that process and him getting to know us and our sound has been great.


What does he do that you guys appreciate so much?

Lovatto: It’s nice when the person you’re working with wants to be as proud of the product as we are.

Renfrow: He really pulled through with this last single that we did. Usually we go in for an eight-hour session. This time we went in at noon and we were worried because we were running out of time, but he just kept going, and 13 hours later, he was still at it because he wanted it to be perfect for us. We’re thankful for working with him.