Pippin returns to theater stages with even more theatrics 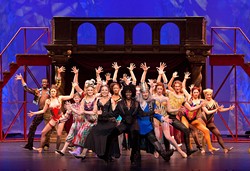 When Pippin first captivated Broadway audiences in 1972, fans had a lot of reasons to love it. Aside from the surreal, play-within-a-play story structure and the title character’s long, experimental quest for self-actualization and true happiness, many audience members took special notice to talented and charismatic Ben Vereen’s role as Leading Player — the meta theater troupe’s dancing, controlling ring leader.

Vereen earned a 1973 Tony Award for Best Actor in a Musical for the role. In 2013, an updated version of Pippin was revived on Broadway. Circus elements like trapeze were added to the show. The Leading Player role was cast as a female, where Patina Miller again found great success, winning a Tony for Best Actress in a Musical.

Housso Semon is cast as Leading Player in Pippin’s newest touring production, which makes its local run Tuesday through Feb. 12 at Civic Center Music Hall, 201 N. Walker Ave. She has a proud performance legacy to uphold, but in a recent interview with Oklahoma Gazette, she said she is up to the challenge.

“What’s great about [the Leading Player role] is that she’s in control of everything,” Semon said. “There aren’t that many roles where you get to control everybody and tell everybody what to do. It’s fun.”

Semon was born in the West African country Côte d’Ivoire (also known as Ivory Coast) but, as a child, moved with her family to upstate New York. She has always had an interest in music, and her passion for theater was sparked in 2012, when she went with her family to see Elton John and Tim Rice’s musical Aida on Broadway.

Vereen and Miller set a high standard for all those to follow as Leading Player. Semon said she’s not putting any extra pressure on herself to match them. Instead, she thinks everyone who takes on the role should do it in their own distinct way.

“I think it will always be different depending on who is playing the role,” she said, “but I am definitely inspired by Ben Vereen and Patina Miller.”

Another thing Semon enjoys about her role in the revised production is that it puts a woman in a place of power and authority that is not motherly in nature, a position that is sometimes hard to come by in theater.

“It’s a different energy when a woman plays the role,” she said. “It’s different in this day and age. An African-American female Leading Player telling everyone what to do onstage — it’s a very dominating character, so it’s nice to have a woman be able to play it.”

More than just being a woman in power, Leading Player is a black woman in power. It is a very different role than those black women are most often cast in, which are usually either a stereotype or part of the supporting cast.

It has been a long journey from singing in West African churches with her aunts to starring in a nationally touring production.

“It’s nice to see anyone doing what they want to do,” she said. “If you have a family member and you see them succeeding in the things that they’ve always wanted, it’s exciting.”