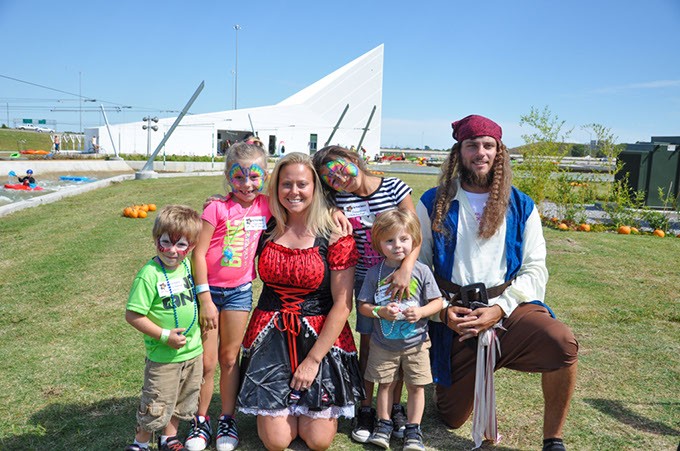 Avast, ye landlubbers! Through October, the large island in the middle of the rafting course at Oklahoma City’s Riversport Rapids is transformed into Pirate Island, and it’s open to everyone noon-6 p.m. Saturdays and Sundays.

“The idea for Pirate Island really came about because we wanted to find a fun way to use Riversport Rapids in the fall and to let people know that the rapids don’t close at Labor Day like swimming pools do,” said Michael Knopp, Boathouse District executive director. “This is a great time of year to raft. The water in October in Oklahoma is warmer than it is most of the year in Colorado, and we’ve got plenty of splash jackets.”

Pirate Island legend has it that the island emerged from the Oklahoma River long, long ago (in the bonny month of May), the creation of a troupe of feisty construction pirates who inadvertently unearthed a treasure trove of pumpkins, gold doubloons and candy, Knopp said.

Once on the island, children can enjoy hunting for treasure by following the clues on a mysterious map.

“At the end of the treasure hunt, kids will find the treasure chest, complete with a real live pirate and pirate’s assistant,” Knopp said.

A small pumpkin and a visit to the painting station are included in admission.

The island has been transformed with the addition of hundreds of pumpkins and seasonal but not-too-spooky décor.

“Our first weekend to be open was regatta weekend, and we’re very happy with attendance,” Knopp said. “Although we didn’t keep a count, Pirate Island crowds were steady.”

Pirate Island admission is $7. Admission is included with any Riversport pass. Rafting is for riders 8 years old and older. Adults can join at no charge if they abstain from the action.

All of the other Riversport activities, including the zip line, sky trail, climbing wall and high-speed slide, also will be open. The recently completed bike park features world-class mountain bike and BMX courses.

“Haunt the River is the last weekend in October at Lake Overholser, and it’s a spookier event than Pirate Island,” Knopp said. “We’ll have big, floating hayrides on pontoon boats, ghost stories, and people can explore the Kreepy Kayak and Spooky SUP Zone. The Trailhead Cafe inside the Overholser Boathouse will be open and serving soothing sustenance to those who survive Haunt the River and need a snack.

Haunt the River is open noon-8 p.m. Oct. 29 and noon-6 p.m. Oct. 30. Haunt the River is included in a $35 Riversport Adventures Day Pass. Other activities include the Sky Scream double zip line across the water, the Candy Corn Climb, the Screamin’ Swing and Dead Man’s Drop. There will be plenty of pumpkins to paint at Haunt the River, and boat foliage tours of Stinchcomb Wildlife Refuge are also included.

Print headline: Ahoy, adventure, The Boathouse District transforms its attractions during the month of October.