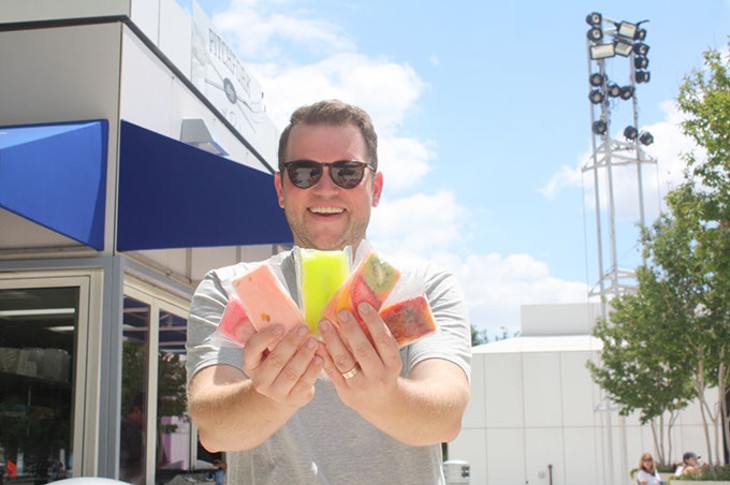 Jacob Conger isn’t totally sure how he ended up serving food at Myriad Botanical Gardens, but he’s happy to be there.

The Congers — Jacob and his wife Andra — started Pitchfork Kitchen and Bakery in 2015 to great acclaim, but their history in food goes back much further.

“We actually started in the wedding business,” Jacob Conger said. “We ran an events center in northwest Oklahoma City, but we saw the changes coming.”

Weddings were starting to move from event centers to rustic locales like barns and other places without kitchens. That was when they decided to start a food truck.

“We built the truck with the idea of catering events at weddings, but we became a Made-in-Oklahoma, everyday food truck,” he said.

That’s because Pitchfork, born of two Oklahoma farming families, is dedicated to using as many top-quality, locally made ingredients as it can. It built a popular following, including Myriad Gardens executive director Maureen Heffernan, who approached the couple about opening a more permanent location.

The truck is still rolling, but now the Congers also run Pitchfork in the Park, 125 Ron Norick Blvd.

“This was Maureen,” Jacob Conger said, gesturing to the restaurant. “She was looking for someone crazy enough to put it together in four weeks.”

Earlier this year, owners of the former occupant, Ice House, decided not to reopen the burger-and-fries stand in the gardens.

The new space isn’t much bigger than the 1952 Ford F-6 wheat truck the couple converted into a food truck, so the transition has been pretty easy, Jacob Conger said.

“It’s just a truck without wheels, so it’s fairly similar, really,” he said. “We’re doing more ice cream here and serving homemade popsicles. ... You know they’re going to walk to the gardens, so we wanted to make something approachable and friendly.”

Those are words that could just as easily describe Jacob Conger, who greets every guest he sees in the park’s Seasonal Plaza with a broad smile. He grew up in Elk City while Andra spent her youth in Garber, home of Bar-D cattle farm.

In fact, Bar-D is where the Congers will get beef for the soon-to-be-added Pitchfork hamburgers. Currently, the restaurant serves sandwiches made with Blue & Gold chicken tenders and bacon as well as salads, chicken tacos and hot dogs. But about half of the business is ice cream, he said, and that’s just fine with him.

Pitchfork’s homemade popsicles, which include plenty of local fruits and pecans sourced by his grandparents, are a big hit. They also give him an opportunity to experiment.

That was when he pulled out a pine nut popsicle. The light pink treat is studded with the nuts, which give it a subtly sweet flavor reminiscent of coconut. Others include fruit-filled Crystal Bridge, cookies and cream and Grandma Etta’s Pecan popsicles.

The Congers plan to offer lunch specials to draw more crowds from nearby offices.

The gardens are also an ideal place to grow a business because there’s always something happening, Jacob Conger said.

“We have events here every day,” he said of Myriad Botanical Gardens. “We had about 6,000 here for Gardenfest.”

Pitchfork isn’t stopping with its new location, either. Conger said they’re prepping the Ice Cube trailer to sell popsicles and cold drinks to the crowd by the Children’s Garden in June.

Print Headline: Pitching in: Pitchfork in the Park makes the most of itsMyriad Botanical Gardens location.