Liver is the line that separates my father from me.

Growing up, it was clear that his tastes and mine were aligned. Bleu cheese dressing. Lemon pepper seasoning. Spicy sauces. Prime rib with lots of horseradish.

But I could never get into liver — a dish my mother only ever pretended she might serve us — while my father would sometimes seek it out.

Still, the folly of youth is often softened with age, and as I am ripe to the point of being mushy, I thought things might be different at Pizzeria Gusto, 2415 N Walker Ave. I ordered the chopped liver crostini ($8) and ... nope. Still not a fan.

There’s nothing wrong with it. As liver goes, it was tempting. The capers and tomatoes and onions and bacon helped. When it came to another piece of crostini vs. another slice of pizza, however, I chose the latter.

Another appetizer has captured my heart, though: Gusto Hot Wings ($9), a bowl full of beautifully fried chicken drumettes tossed in a Sriracha-based hot sauce. The burn is mild, but the flavor is divine. (Somewhere online, there is a slo-mo video of me devouring a wing in one bite.)

The bruschetta ($10) is a good choice, though with only three, it’s not much to share. Instead, I would heartily recommend the fried artichoke hearts ($10) with harissa aioli for dipping. These hot little bites are addictive and delicious.

Not that you’re looking for a reason to skip the pizza, but if you’d like one heck of a salad, get the tuna conserva ($12). Starting with a base of arugula, the conserva mixes oil-packed tuna with cannellini beans, green beans, tomato, olives, onion and a lemon vinaigrette.

As we enter into the dregs of the Oklahoma summer, May’s rainy wonderland a distant memory, this salad is fresh, cool, crisp and satisfying. 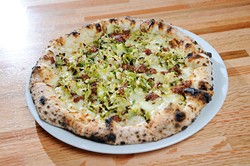 As you might have reckoned from the name, Pizzeria Gusto does serve pizza. These are Neapolitan-style pies, which means they cook up incredibly quickly in their custom ovens without overdoing the toppings.

There is no pepperoni on the menu. Sorry, salted meat fans. There is, however, soppressata, which is a slightly less pungent cured sausage. The $14 pizza is straight to the point: soppressata, peppers, tomato sauce and cheese.

If you want something even more simple, let me point you to Margherita the Queen ($10). It’s sauce, cheese, basil and extra virgin olive oil. This is actually a great starting point pizza, especially if you’re new to this style of cooking.

Get a sense of the sauce and the cheese before you begin piling on more toppings.

When you do start piling them on, I very much enjoyed the cherry tomato pizza ($12). The sweet tomatoes melt under the heat while calabresa peppers add punch. The capers and kalamata olives send it into overload — I might actually prefer it without the olives. You can add anchovies to the pizza for $4, but I think the normally powerful fish gets buried in the other flavors.

Speaking of fish, the salmon pizza ($18) also has some on it. This is about as far from the pizza I grew up with as you can get. The cured salmon, arugula, tomatoes, capers and orange-pepper crema make for something akin to a bagel with smoked salmon and schmear. It’s salty, but I kind of love it.

Honestly, it’s hard to go wrong with a pizza here. The pancetta with Brussels sprouts ($14), the meatball with roasted peppers ($14) and the four-cheese with sage and truffle oil ($12) are all tremendous dishes.

The kitchen staff is constantly working on new and inventive weekly specials. Listen to your waiter or waitress.

I always advocate for dessert because I’m your best friend. Please invite me to your wedding/bar mitzvah!

From the first bite, I was smitten with the butterscotch budino ($8), a pudding/custard dish topped with fresh whipped cream and sugary, nutty crumble. It’s a textural dream with smooth, rich budino, fluffy cream and the sweet, crunchy grit on top.

The ricotta doughnuts with affogato ($9) are also a delight. The donuts are feather-light and soak up the espresso and hazelnut gelato.

No one expects you to share. Do not let their pleading eyes fool you.

So I’ll leave the liver crostini to you, Dad. Luckily, at Pizzeria Gusto, I’m spoiled for choice on other dishes to love.

What works: The tuna conserva might be the dish of the summer. What needs work: Chopped liver is an acquired taste. Tip: Try Gusto for a late lunch and get a seat at the bar to watch the massive oven at work.