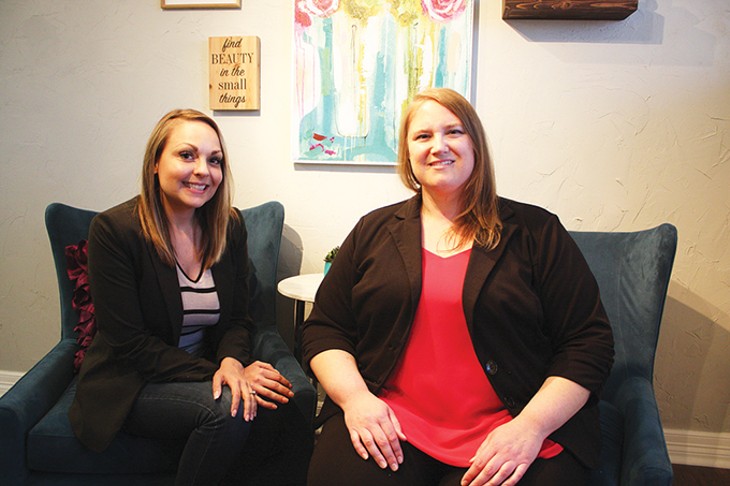 When survivors of human trafficking enter The Dragonfly Home — the state’s first and only state-certified human trafficking crisis center — they walk into an inviting space with pops of color and encouraging wall decor. The foyer, located inside a nondescript and unmarked building in Oklahoma City, sets the tone for those coming out of a crisis — it is a place of refuge.

“We offer a place where the peace and the hope are palpable,” said Whitney Anderson, executive director of The Dragonfly Home. “They can feel safe for the first time in a long time. There are people who are willing to help and meet them right where they are without any judgment.”

Human trafficking is a form of modern slavery. Victims, which can include children, teenagers, women and men, are subjective to force, fraud or coercion for the purpose of commercial sex or forced labor. According to the U.S. Department of Health and Human Services, human trafficking ties with the illegal arms industry as the second largest criminal industry in the world. Many cases go unreported, making it a difficult crime for law enforcement to investigate and organizations to aid victims.

After discovering the injustices of trafficking in Oklahoma, Anderson, along with two others, co-founded The Dragonfly Home in March 2016.

“Once we knew about it, we couldn’t turn a blind eye,” she said while seated on the couch in the organization’s group counseling room. “We needed to do something about it.”

From its early days, The Dragonfly Home sought to fill existing gaps in services offered to human trafficking survivors, said Melissa Eick, one of the co-founders and the nonprofit’s director of communications and development.

The Dragonfly Home specializes in providing comprehensive trauma-informed, victim-centered direct care and protection to survivors. As a non-residential model, the organization provides counseling, medical and dental care, food and clothing, legal assistance and advocacy, substance abuse and addiction support and recovery. The Dragonfly Home offers services to women and men as well as minors.

“Everyone’s story is so different,” Eick said. “What we found was that if somebody doesn’t need a shelter, doesn’t qualify for a shelter or doesn’t want to be in a shelter, then they are not getting the specialized services geared towards trafficking victims. In fact, they might not get any help.”

Over the past 14 months, The Dragonfly Home has served more than 100 survivors. Through its own 24-hour human trafficking helpline, the organization has fielded more than 1,000 calls.

Increasing interest and need for services has led to The Dragonfly Home’s upcoming expansion. Later this year, the crisis center will move to a large space to accommodate more therapy sessions. With a need for residential services, the organization plans to open an emergency sex-trafficking shelter, which will be OKC’s only state-certified sex-trafficking shelter, according to Anderson and Eick.

In the decade between 2007 and 2017, the National Human Trafficking Hotline received 1,554 calls from Oklahoma residents and reported nearly 660 victims during that decade. In recent years, federal studies have singled out Oklahoma for its high numbers in human trafficking activity. The state’s highway system has been viewed as an attributing factor.

No one knows just how many people are victims of human trafficking; however, studies suggest that human trafficking is tied to the vulnerability of victims. Traffickers target people who are poor, struggling and disenfranchised. In Oklahoma, where more families live in poverty than the national average, where child abuse and neglect are rampant issues and where a large number of residents struggle with drug abuse and addiction, Anderson said, societal ills explain human trafficking’s persistence.

“In our work with survivors, we see that this is a very complex issue,” Anderson said. “We understand that childhood trauma absolutely affects the vulnerability and the likelihood that someone could be extorted. … We have all of these issues that feed into the vulnerability of trafficking. At the end of the day, it is a business. It is supply and demand. We have individuals here who are willing to pay for sex, and we have people here who want free or cheap labor.”

The Dragonfly Home earned its name after its founders sought a title that symbolized resilience and strength.

Once the name Dragonfly was decided, the founders added the word “home.” In general, homes are safe places. Despite not offering residential services initially, the founders wanted to send a message to its future clients that the organization would come to “feel like home” for survivors.

As Eick and Anderson walked down the halls of the crisis center, they said the inspirational wall art in the hallways and in the counseling rooms were inspired by survivors. In a way, it’s the survivors sending a strong message to the next person to enter The Dragonfly Home.

“We get told, ‘I have hope for the first time in a long time,’” Eick said. “Once they get into safety and their needs are met, they can begin to think about a different future, one they can build for themselves.”