Hundreds gather to hear from leading urban planners at the Institute for Quality Communities’ Placemaking Conference in Norman. 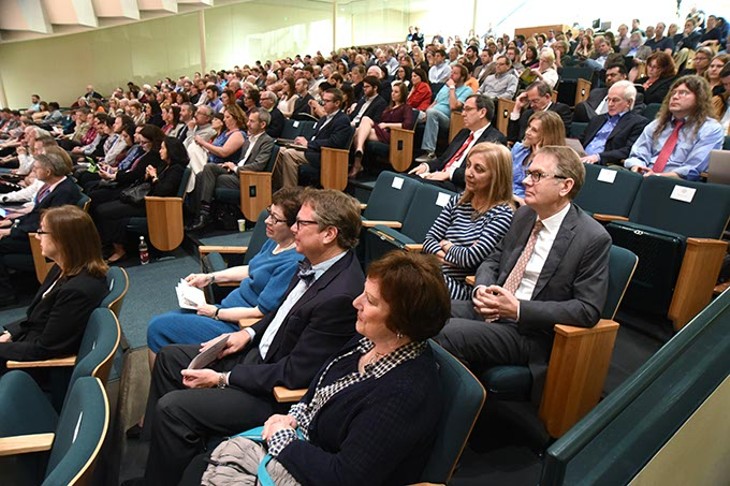 When Charles Marohn looks at a photo of a new fast food restaurant in a strip mall, he predicts with confidence what the next quarter century of the new development will look like.

“This new taco joint has a two-lane drive-thru, a large parking lot and we got rid of the on-street parking. Everybody likes this, right?” Marohn said while speaking Monday at the Institute for Quality Communities’ Placemaking Conference. “But we all know the trajectory of the taco joint, right? We all know that in 20 years, there will be a new taco joint a couple miles up the road; this one will be turned into a used car lot. Ten years after that, it will be boarded up and there will be drugs sold out of the back, and the city will be looking for a grant to have it torn down and redeveloped.”

During his presentation, Marohn, who is an engineer and author of StrongTowns.org, addressed the type of dual development taking place across American cities as outlying suburbs continue to sprawl with low-level projects while historic neighborhoods in the urban core, especially in places like Oklahoma City’s Midtown neighborhood, are experiencing slower growth that results in more established structures.

“The new experimental way of building is financially a loser,” Marohn said about suburban development that began to change the way cities were built after hundreds of years focused on a pattern of density and walkability.

Paying close attention to people-friendly developments that encourage interaction, walking and street-level retail not only leads to better economic success for a city, Marohn said; several other speakers at Monday’s conference in Norman reported that it can improve obesity rates and quality of life.

“We need to have places to be fully human,” said Wilfred McClay, the Blankenship Chair at OU’s History of Liberty department. “Globalization makes it so easy to move people and products ... that it sometimes seems that the world is becoming placeless.”

Hundreds gathered Monday to hear from national leaders in placemaking, urban design and health. Many in attendance were city planners, architects and community leaders from across Oklahoma looking to increase their own community’s sense of place with a return to development that centers on people rather than the automobile.

While not connected, Open Streets OKC, held a day earlier, highlighted the type of placemaking development promoted at the conference. Tens of thousands of residents showed up Sunday afternoon as a stretch of 23rd Street in Uptown was closed to motorized vehicles. Food trucks and vendors parked along the street as citizens walked and rode bikes on an urban road that can often present obstacles to pedestrians and cyclists.

If Open Streets highlighted the hunger Oklahoma City residents have for better placemaking, Monday’s conference was all about how to make it a permanent part of a city’s design.

The Plaza District, Western Avenue and downtown have each experienced efforts in recent years to expand pedestrian infrastructure and remove the focus from the car. Mariela Alfonzo, founder of State of Place, gave a presentation and said some of her favorite neighborhoods have been transformed with some minor changes, including the addition of chairs and tables.

“[Great places offer] different opportunities to sit, rest, linger and watch other people, which is one of the best things to do in great places,” said Alfonzo, who used the phrase “huggable neighborhood” to describe some of her favorite communities.

Great places not only encourage interaction and commerce but they can create a healthier community, especially during an era when health benchmarks continue to fall.

During her presentation, Lee reported that in 1990, no state had an obesity rate over 15 percent. However, half of all states had a rate higher than 15 percent by 2000, and today, there is no state with a rate below 15 percent.

When the leading cause of death in the 19th century was infectious disease, cities created an environment to fight back with improved sanitation and building codes, Lee said. Today, the biggest cause of death is chronic disease, and Lee added that cities should respond with active transportation models and other steps to increase an active lifestyle.