“There’s not one centralized headquarters where Doctor Doom is meeting or a Legion of Heroes are hanging out in a boardroom.” 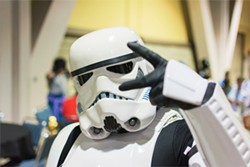 Amazing! Comic Con is a family-owned business celebrating comic book pop culture in five U.S. cities throughout the year. Oklahoma City is the latest to be added to the list, which includes Phoenix, Las Vegas, Houston and Honolulu.

This is OKC’s first large-scale event based on comic book pop culture. 15,000 to 20,000 people are expected to attend, and planners intend to make it an annual event. The idea behind Amazing! Comic Con is to celebrate the culture’s creators and its foundation: the comic book.

“We believe all current pop culture originates inside the comic books,” said Jimmy Jay, co-founder of Amazing! Comic Con and Jay Company Comics. “Their creators are responsible for the movies that we see, the TV shows we that we watch, the toys that we collect, the video games that we play, the cartoons that are on for our kids and everything in between.”

Though the event celebrates all forms of media produced by popular franchises such as Batman and Teenage Mutant Ninja Turtles, Jay insists that comic books are front and center because they are the soil from which all other media sprouts. Spider-Man’s tale was not written for the self-titled blockbuster in 2002; it started in 1963, when ink met the thin pages of a comic book, bringing Stan Lee and Steve Ditko’s superhero to life.

By celebrating comic books, Amazing! Comic Con brings comic convention culture back to its roots. Jay was inspired by childhood experiences when he and his brother created the event six years ago.

Jay said what made that day in San Diego special to him was meeting the creators behind the pages of the comic books. The influence of the experience is reflected in Amazing! Comic Con.

The Oklahoma City event will host Kevin Eastman, co-creator of the Teenage Mutant Ninja Turtles franchise; Rob Liefeld, comic book legend and creator of Cable & Deadpool; and Mat Nastos, a talented writer whose hand is in everything from Phineas and Ferb to Star Wars.

You might expect a convention touring six cities across the country to be a large, corporate outfit, but that could not be further from the truth. The business consists of six full-time employees who live across the U.S. and depends on family help as well as volunteers in each city. Jay and his employees are on-hand during the event and also tour and reach out to cities they deem as candidates for future Amazing! Comic Cons.

“We are a family-based, tight-knit group,” Jay said. “There’s not one centralized headquarters where Doctor Doom is meeting or a Legion of Heroes are hanging out in a boardroom.”

The popularity of comic books and superheroes in the last two decades marks a shift in the American trade and collecting culture. Throughout the 1980s and early 1990s, stores for trading and buying sports cards were not unusual across cities in America. Today, the sports card landscape is comparatively barren. The stores closed up or shifted to comic books and figurines.

Jay, an avid sports fan, believes technology is partially to blame for this shift.

“Maybe technology has filled that niche, that need [for sports cards],” he said. “Now that there’s about 10 ESPN’s, several Fox channels and several baseball games a night, where before, we had to imagine what Wade Boggs would look like at the plate. On the flip side, with comic books, the story originates with that material.”

Along with the pop culture creators, Amazing! Oklahoma City Comic Convention will feature dozens of exhibitors, panels and cosplay competitions. The final day of the event is kids day and will feature free sketches and other kids activities.