What works:The plant-based milkshake and chicken burger would fool unsuspecting diners.
What needs work:The regular veggie patty did not hold together well, and the guacamole was under-seasoned.
Tip:Only the S&B’s location at 59th Street and May Avenue offers the full plant-based menu.

The introduction of a full plant-based menu at S&B’s Burger Joint’s original location at 5929 N. May Ave. earlier this year has proven to be a shrewd business decision and mirrors success found by national fast food chains with the introduction of meat replacements from Impossible Foods and Beyond Meat.

S&B’s co-owner Shannon Roper put together the growing menu that is currently at 15 items, anchored by the Impossible Meat burger patty but also including Hungry Planet chicken, Tofurky bacon, Daiya cheese and “Just” mayonnaise. Everything is plant-based and dairy- and animal-free.

Roper said inspiration came because one of his daughters is vegan and the other is vegetarian, so they cook plant-based meals at home quite a bit.

“They like the same foods as everyone else, just without animal products,” Roper said. “Just because you’re vegan, it doesn’t mean you don’t want to throw down on a Frito pie burger. It turns out that a lot of people are interested.”

Since adding the menu in February, Roper said plant-based items now account for 20 percent of sales and have also led to a significant overall volume increase for the location. The restaurant’s 23-ingredient veggie patty remains on the menu and can be substituted on any sandwich, but Roper estimated that it only accounts for about 2 percent of sales.

“[The new plant-based menu] is honestly very much exceeding our expectation,” he said. “We put it in, and it’s been hard to keep up with. … We didn’t realize that so many burger eaters were looking for an alternative.”

This has been the breakout year for companies like Impossible Foods and Beyond Meat. Carl’s Jr./Hardee’s and Del Taco have added Beyond Meat to their menus. Since introducing the alternative, Del Taco has expanded its offerings after it added a 2.2 companywide sales increase, according to Restaurant Business Online.

Burger King is adding the Impossible Whopper to its menu this week, and more competition is entering the market. Tyson Foods recently announced its Raised & Rooted brand, while Britain’s The Meatless Farm Co. is coming stateside in August.

Adding retail locations and reformulating its formula to be gluten-free has led to some supply issues for Impossible Foods. The company capped the amount retailers could order in June and announced in July that the shortage had ended, but it’s still running into occasional supply issues.

"We didn’t realize that so many burger eaters were looking for an alternative."
— Shannon Roper tweet this

I went to try S&B’s plant-based menu on a Monday only to be told that only the house veggie patty was available.

“When we first started, we had everything we needed, and then probably two months ago, we ran into issues,” Roper said. “It’s not an everyday problem. … Most of the issues have been resolved.”

I returned the following Wednesday, and everything was in stock; it appeared to be a minor blip on the menu, but it did allow me to do a comparison of its original veggie patty to newer offerings.

On the first visit, I got the guacamole bacon burger with the house veggie patty that is made with three kinds of beans and 20 other ingredients. I liked that it had plenty of large chunks of roasted veggies like sweet peppers to help with the flavor, but the patty kind of compressed under the weight of the bun — a common factor for a lot of veggie patties. I enjoyed the flavor, but structurally, it was lacking. The guacamole on the burger was really just smashed avocado; I didn’t even taste salt in the mixture.

I’ve had Impossible Foods’ burger patty on a few occasions; I know it’s an excellent product. It is also available locally at Tucker’s Onion Burgers, Republic Gastropub, The Pump Bar, The Wedge Pizzeria, Hopdoddy Burger Bar, The Jones Assembly, Kitchen No. 324 and many other locations. I would lean toward the Impossible patty over the house veggie patty at S&B’s.

You can get plant-based versions of the standard Fatty burger, The Colombian that puts a sea salt and coffee crust on the patty, The Theta with a smoked pecan Theta sauce, green chili cheese burger, Old Fashioned, mushroom and Swiss Daiya cheese, Hot Lips with Korean barbecue and Impossible loaded fries with Daiya cheese and taco-seasoned Impossible crumbles. 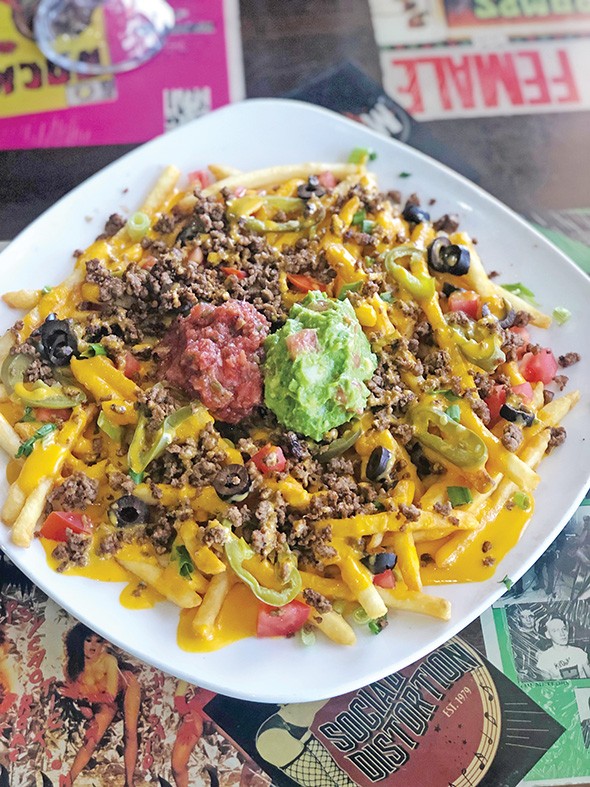 Since I know that I like the Impossible Burger product, I opted to try the Southwestern plant-based chicken burger. S&B’s uses St. Louis company Hungry Planet’s ground chicken product that is made with soy and wheat protein. It is breaded, fried and served with a house barbecue sauce, Daiya cheese and “Just” mayonnaise. I enjoyed the chicken patty; I wouldn’t have known it is an animal-free product unless they told me. I found the house barbecue sauce to be on the sweet side, which I take no issue with, but my wife found it to be cloying. The Daiya cheese melts well, and I like it more than some of the cashew cheese alternatives that can be soupy.

We finished the meal with a dairy-free milkshake made with a base of coconut milk, and Roper said they alternate between almond milk and oat milk. I primarily use oat milk at home because it can be used in baking and is the best choice for a latte at a coffee shop while having much lower water usage to cultivate than almond milk.

S&B’s plant-based menu only lists a cookies and cream milkshake, but the server said they’re able to make basically any of the milkshakes on the menu vegan, especially now that they have a vegan whipped cream to top the treat. I ordered the cookies and cream one and enjoyed the dessert. It wasn’t as thick as a normal milkshake, but I’ve had a few milkshakes in my life that were so thick they couldn’t be sucked through a straw.

Roper said the plant-based menu will likely only stay at the original S&B’s location, but the 20 NW Ninth St. location also has substantial vegetarian offerings. I enjoyed everything on the new menu that I tried and look forward to making it a plant-based treat. There’s no doubt plant-based alternatives are much better for the planet, but they should still be treated as an indulgence, not a regular meal.