Science shows how different genres influence creativity, the positive effect of music versus silence, music’s effect on concentration and its usefulness in accomplishing tasks, according to information compiled by Space Chimp Media. 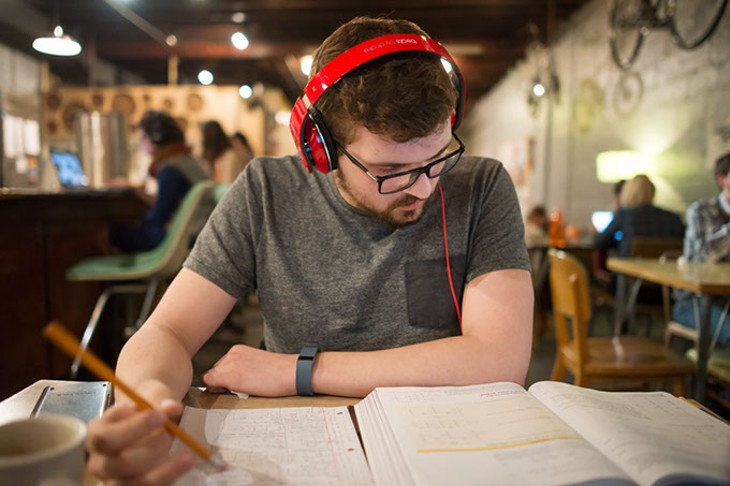 With new album releases, concerts and music festivals ahead this season — not to mention spring semester finals — research illuminates the relationship between music and how the brain works, especially how it impacts productivity.

Science shows how different genres influence creativity, the positive effect of music versus silence, music’s effect on concentration and its usefulness in accomplishing tasks, according to information compiled by Space Chimp Media.

Christian Almonrode, a University of Oklahoma aerospace engineering major, frequently uses music to center himself while working and studying.

“I listen to a lot of indie, piano and a little more classical style of folk,” he said. “It’s softer and carries me through my study a bit better. It blocks out the outside noise but blends in with my own thoughts.”

The data, consolidated from an article by Gregory Ciotti of the Sparring Mind blog and a 2012 article from The New York Times (that also cites other studies) notes that mood improvement — usually dictated by personal preference and familiarity — might play a more prominent role than what kind of music is playing.

Almonrode also mentioned that if he’s low in energy, there’s no better fix than a few tracks of death metal to get pumped.

A 2005 research study cited in the Times article explored the effect of music listening on work performance for employees of four software companies. The study varied the presence and genre of music over a five-week period, noting differences in mood, work quality and the time spent on tasks.

One participant in the study captured this with a comment that “[music listening] helped in relaxation, getting around [mental] blocks by changing thoughts instead of getting ‘tunnel visioned.’”

“I listen to music while I’m operating, usually classic rock,” said Mihalsky, who works with Oklahoma Sports Science & Orthopedics in Edmond. “It’s what I grew up with and like. [The hard beats] of rap and hip-hop music I can’t listen to. It’s too distracting.”

Space Chimp also cited articles that touch on other aspects of research studies, namely that the best music for demanding tasks tend to be repetitive and softer instrumental genres such as classical, electronic and gaming music, and that our brains take a while to kick into gear regardless of what’s chosen to listen to.

It’s something Almonrode has picked up on; he allows himself to listen to a wide variety of music for the first and last portions of his study time, while reining in his ears to softer genres for the bulk of his work time.

“Music fills me,” Almonrode said. “I think humans were made to listen to music. Rhythm is built into people and the things we do.”

Print headline: Playing favorites, What’s good to your ear is good for your work.