When Plaza District Festival began 19 years ago, it was mostly a small gathering of community members enjoying each other’s company. Much like the rest of 16th Street Plaza District, the annual all-local art and music street fest has seen exponential growth in the last several years.

A crowd of 20,000 or more is expected to pass through this year’s Plaza District Festival, set to run 11 a.m.-10 p.m. Saturday. Artist vendors and other booths will fill up NW 16th Street between Gatewood and Indiana avenues.

Thirty-two locally based artists and vendors will participate in the festival. What makes Plaza Fest distinct from other local festivals is that all participants are based within the state.

That local focus extends into the music and stage lineup as well. The festival’s main stage can be found in the Lyric Theatre parking lot at 1727 NW 16th St. An indoor stage is set up inside The Venue OKC, 1757 NW 16th St.

Ten food trucks — two more than last year’s event — will be onsite for guests to enjoy. Those trucks include Back Door Barbecue, C’est Si Bon, El Reno Onion Burgers, Holey Rollers, Jerky.com, The Loaded Bowl, Let’s Do Greek, Sizzle n Spice, Taste of Soul Chicken & Waffles and Yum Yum Bites. The food trucks were selected to complement the existing restaurants in the district, which will be open as usual.

Plaza Fest also offers a unique experience for children. Whereas other festivals rarely stray away from inflatables and common yard games, Plaza Fest lets children shop for their own art in the Plaza Kid’s Art Boutique. Donated, kid-friendly works will be for sale for $2-$5.

The Plaza Walls murals are located in the back alleyways behind the businesses on the north side of 16th Street. Three other large murals can be seen facing N. Indiana Avenue and on the sides of Saints, 1715 NW 16th St., and Everything Goes Dance Studio, 1721 NW 16th St.

Setup for the project begins Wednesday and Thursday before the expo with work continuing through the weekend.

Plaza Walls co-curator Kris Kanaly said last year’s expo was very successful and the event is a rare opportunity for non-artists to peer into what goes into the creation of a mural.

“The thing about the expo is you get to see the artists in their native habitat painting live,” he said. “You get to see all the different techniques that they’re using, things you wouldn’t ever think that that’s how they did that.”

“He’s got a huge following,” Kanaly said. “I can’t wait for him to be posting on his Instagram about being in Oklahoma. This does a lot for tourism and awareness that we’re a cool state — cool enough for a guy like Wane to come to.”

This year’s expo is sponsored in part by Google, and on the day of the expo, the exhibit will go live on Google Cultural Institute, which chronicles new local works across the globe.

“It’s a huge deal,” Kanaly said, “not just for the district, but for the state.” 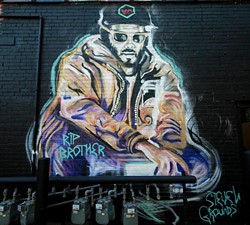 A successful Plaza Fest could bring Plaza District Association closer to its goal of installing new permanent public art displays in the district. Lewis said the district is considering several plans for a new three-dimensional art installation in the district. She added that a concept might be ready for announcement by the day of the festival.

“The goal is to bring more public art to the Plaza,” Lewis said. “We clearly have murals taken care of, but we’re looking for something that’s a little less temporary and more long-term.”

Part of the funding for the new installation will be made through admission to Plaza Fest’s Artist Lounge, a festival tent featuring exclusive artist works. High-point beer and wine will also be served in the space. All sales benefit the public art fund, and admission is limited to those 21 or older.

Additional donations to the cause can be made online through the district’s Sponsored By You campaign. Find the link at plazadistrict.org.

In past years, the Sponsored By You campaign has been used to fund the festival and the Plaza Walls Mural Expo.

“We’ve had a lot of luck with that and have been able to get a multitude of donors through that,” Lewis said. “We felt like public art was something the community really wanted to see, so we’re giving the community an opportunity to support these project directly.”

Lewis said at its core, the Plaza District is an arts- and culture-focused entity. It will always be part of the district’s mission to support local artists and add to the art offerings within the area.

“We’re just trying to add more ways for people to experience art in the district,” she said.