Plaza District honors Jonathan Fowler and Susan Hogan for their dedication to the area.

People say timing is everything, but as Jonathan Fowler recalled, it was also his own determination to link arts and culture to his family’s car business.

“We had opened the Volkswagen store and were looking for something,” said Fowler, whose family owns Fowler Auto Group.

In 2010, he sat down with Kristen Vails, who was then executive director of the Plaza District, a commercial hub on 16th Street.

“The Plaza District was looking for someone to come on as a sponsor for one of its events,” Fowler said. “It was like an extension to what I had seen with Norman Music Festival. I am a failed musician, and that’s what I really wanted to do. The music festival allowed me to work in my family’s car business but not give up that love and passion for music.”

Years earlier, in 1997, Gatewood resident Susan Soule Hogan answered the phone and heard a neighbor explain there was a meeting to discuss nearby 16th Street. Once a popular commercial area, 16th Street between Blackwelder and Indiana avenues was riddled with crime and drugs. The area’s vacant buildings were on the verge of collapse.

“There wasn’t a lot of businesses there, but there was some business there,” Hogan said, then laughed. “It was awful, but it was beautiful with its old brick buildings.”

Hogan attended the meeting and pledged her support. She became a fixture in the movement to reinvent a run-down strip of commercial buildings. Since the initial meeting, Hogan has held many roles with the Plaza District, including board member, board chairwoman and executive director.

“In the beginning, we didn’t call it 16th Street because 20 years ago, no one wanted to go south of 63rd Street,” Hogan said. “We just talked about the Plaza District. … A lot of things have changed.”

These days, it’s one of the city’s top arts and entertainment areas full of locally owned restaurants, independent shops and authentic experiences.

June 1, 16th Street Plaza District Association honors Fowler and Hogan for exemplifying a pioneering spirit through their leadership and commitment to urban revitalization. Fowler, vice president of operations for Fowler Holding Co., becomes the 13th recipient of the Urban Pioneer award. Hogan will be honored with the first-ever Plaza Pioneer Award.

As a kid growing up in Norman, Fowler often looked at an old photo of one of his grandfather Bill Fowler’s Toyotas loaded with local schoolchildren ready to wave in a community parade.

“I knew that my grandfather was involved in the community, but I didn’t really know why,” Fowler said. “It was out of a necessity to market his business in a way that built relationships with the consumers in his market. It wasn’t that you were going to buy a Toyota; it was buying a car from Bill Fowler because you wanted to support him.”

Fowler, who joined his family’s business in 2006, adopted his grandfather’s business philosophy. A music lover, Fowler easily found a spot as a Norman Music Festival (NMF) volunteer board member. When the time came to open Fowler Volkswagen of Norman, he knew expensive television and radio advertising was not an effective strategy to use when launching the German car company in the metro.

“A tremendous amount of my playbook for the marketing strategy was based on what my grandfather did in the early 1970s,” Fowler said.

In addition to the VDUB Sessions, in which local bands and singers perform while traveling in a renovated Volkswagen bus connected to The Spy FM, Fowler turned to dealer sponsorships. Through sponsorships of NMF and the Plaza, Fowler began to see culture-led economic development and was so encouraged by the arts influence that he soon became involved with Oklahoma Arts Council’s Leadership Arts and then Leadership Oklahoma.

The presence has paid off for the business in areas of revenue and employee recruitment. But Fowler said he is not done. The lessons from his grandfather, who passed away in September, continue to influence his daily decisions.

“He talked a lot about the idea that if he hadn’t invested the way he did in the Norman community, we wouldn’t be where we are today,” Fowler said. “I am very proud that the more we do, the more these connections take hold.” 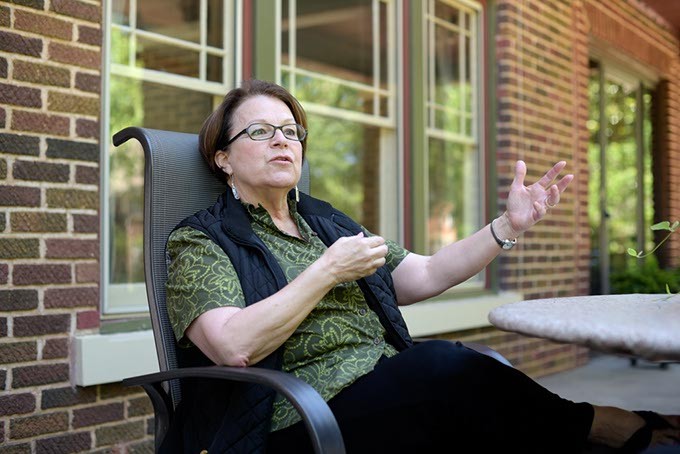 When the Plaza Association hosted its first festival in 1998, a flatbed trailer, to be used as a stage, was rolled onto the street. Dancers from Everything Goes Dance Studio performed, followed by an Oklahoma City University string quintet, and a few neighbors sang karaoke. That’s how it began, Hogan said.

“The first thing was looking at what we had and what our strengths were,” she said. “The strengths were diversity and longevity. We had a lot of people with long-term commitments to this neighborhood. … It basically came down to we either give up and everybody move away, or we do something.”

Hogan, along with other passionate stakeholders, found many supporters, including city officials, who wanted to see movement. The city kicked in $2.5 million for a streetscape project. The district’s transformation picked up steam when Lyric Theatre of Oklahoma invested in the landmark Lyric at the Plaza theater and local developers, including homebuilder Jeff Struble, began renovating vacant buildings.

Around that time, Hogan researched areas around the country for ideas. Snapshots of outdoor cafes and inviting gathering spots from a visit to Lawrence, Kansas, were displayed on a bulletin board in the district’s office, open two afternoons a week.

Hogan began to share the vision with local business owners.

“Most of the time, people didn’t come,” Hogan said. “It helped to spread the word, and eventually, some did come over.”

In 2008, as the district was blossoming, Hogan stepped down as executive director to allow for “new blood.” After a decade of involvement with the district, she believed it was time for new leadership to take the district to the next level.

Now, as Hogan sees young families headed to the annual Plaza Festival, which attracts over 20,000 visitors, or LIVE! on the Plaza, she thinks back to those snapshots on the bulletin boards. The vision is now a reality.

“I swear it is what you see down there today,” Hogan said. “It is awesome. It is so awesome. I think part of the key was being able to communicate a vision and getting in front of people who were willing to listen.”