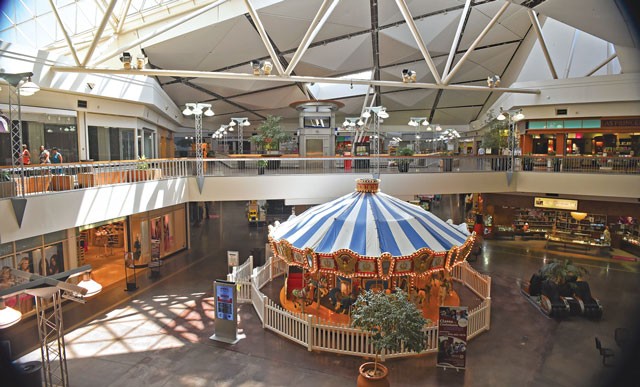 When the 1.2 million-square-foot Crossroads Mall, located near the intersection of Interstate 240 and Interstate 35, was scooped up by Oklahoma City’s Raptor Properties and rebranded as Plaza Mayor at the Crossroads, there was plenty of cause for celebration. Back in Spring 2013, developers pitched their plans for transforming a near-empty mall into a shopping destination with Latino businesses and restaurants and musical entertainment every weekend.

Rejuvenating a mall that was once the ninth largest in the nation caught the attention of the community, especially after stores boarded up one by one in the 1990s and 2000s. Two years after the mall began its second life, the mall’s occupancy had grown from 17 percent in 2013 to 45 percent. In addition to shops and eateries, Plaza Mayor was home to a business incubator featuring dozens of small businesses in a former department store and a health clinic operated by Integris. On weekends, large crowds flocked to the central court for concerts and community events.

It appeared that the dying mall, revamped into a Hispanic cultural shopping center catering to the needs and interests of Oklahoma City’s growing Hispanic population, was the solution. The vision for Plaza Mayor came from developer José de Jesús Legaspi, who joined in the Oklahoma City project after transforming a former Fort Worth dead mall into the highly visited and shopped La Gran Plaza. Legaspi’s Hispanic malls are developed around the central idea that consumers want a space to gather. Similarly, the architect credited with designing the first shopping malls saw them as indoor town squares.

“We don’t buy malls or run malls on the basis that we are going to get it, built it up and then sell it now. We’re hoping that we can run it for five, 10, 20 years from now,” Legaspi told Oklahoma Gazette in 2015. “And that’s a long-term investment. It takes a lot of time, a lot of effort, a lot of money to make it happen.”

Two years later, the southeast Oklahoma City mall is right back where it started with low tenancy and few shoppers. In late September, Raptor Properties, a division of CRM Properties Group LLC, announced its intention to close the mall Oct. 31.

“CRM has made countless efforts over the past several years exploring every opportunity for success of Plaza Mayor to remain as a shopping destination,” a company press release stated. “The current retail environment has not provided CRM the opportunity to attract much-needed large retail tenants. CRM has exhausted all possibilities in the current economic market to make Plaza Mayor a viable mall.”

What’s next for the former mall is unknown. Raptor Properties only hints that the property could shift into another use and did not return calls from Oklahoma Gazette seeking further comment.

For the time being, Plaza Mayor joins a growing list of dead malls – which is a term used to describe either half-empty or closed shopping malls. In 2014, Green Street Advisors, a real estate advisory group, predicted that 15 percent of malls in the United States would be closed or converted into non-retail properties over the course of the next decade. There are examples across the country and in Oklahoma illustrating that malls can successfully be converted into community colleges and schools, business offices and healthcare facilities. Examples of conversion from shops to offices include northwest Oklahoma City’s Shepherd Mall and Tulsa’s Eastgate Metroplex. One could argue that Plaza Mayor is already on its way as Santa Fe South, a well-established south Oklahoma City charter school, purchased and renovated the former Montgomery Ward’s building into a high school facility. Santa Fe South is not affected by the mall’s closure.

Other possible scenarios could involve the property owners selling the mall for the value of the land or razing the building and redeveloping the property.

The property owners contest that Plaza Mayor’s future will be in the community’s best interest.

“While the future plans of this mall are currently unknown, CRM will be making every effort to work with municipal and state governments to determine the highest and best use of the property to best serve the city and community as a whole,” the company stated.

Print headline: Future unknown; Plaza Mayor at the Crossroads to close at the end of October.

Current tenants: The mall closed in 2010 except for two entities, which were owned separately from the mall. Sears closed in September. Life. Church remains open.

Past tenants: Macy’s and Sears