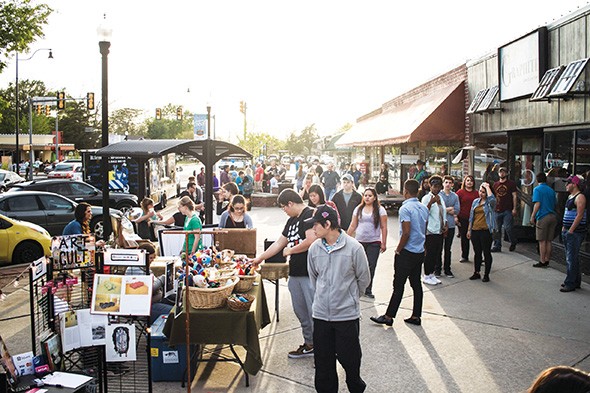 Pride on the Plaza

16th Street Plaza District’s monthly Live! on the Plaza art walk is hosting its first Pride-themed event in the series June 14, which organizers hope serves as a kickoff for the June 22 Pride Parade.

The free event open to all ages kicks off at 6 p.m. with Pride T-shirt tie-dying and an artist market in front of OKC Improv, followed by live music by GWIZ at 7 p.m. in front of Bad Granny’s Bazaar and a drag race in the Plaza Walls courtyard alleyway between Dig It! Boutique and Lyric Theatre of Oklahoma.

Dig It! owner Amanda Martinez was instrumental in organizing the event, according to Plaza District director Selena Skorman.

“I feel like the Plaza is a neighborhood of diversity; it always has been, and it will be as it continues to grow,” Martinez said. “Our target audience, especially for my store, is younger and diverse. At Dig It!, everyone is welcome. It’s so encouraging for kids that are not even part of LGBQTIA lifestyle, that they are supporting their friends and peers. Pride Month is huge.”

The drag race is a contest with five competitors who receive “drag in a bag.” They will have five minutes to create an outfit out of mystery items and then compete in a race complete with obstacles and surprise challenges while surrounded by the art of Plaza Walls.

Dig It! also hosts a drag show at 9 p.m. Martinez said it is important to have such an event because there is a decreasing number of all-ages venues for drag and it promotes awareness to kids at an early age.

“I want to give props to our business owners because they are the ones for the large part that make our district feel so welcoming to the LGBTQIA+ community,” Skorman said. “If they weren’t welcoming, the district wouldn’t feel welcoming, and they are, especially with the younger population of the community. If you’re under 21, you can’t go to the gay bars or places that are safe spaces designated for those kids to go to; in fact, some of them are recently closed. Bad Granny’s and Dig It! have always been a place where kids can go after school and feel welcome.”

The event also includes a fashion show at Velvet Monkey Salons at 8 p.m., and those in attendance get a sneak peak of the Plaza District’s float designed by Max Ogan, owner of Bomb Shelter art gallery, for the following week’s Pride Parade on 39th Street.

“We’re using [Pride on Plaza] as a way to help market the big Pride event,” Skorman said. “It’s a pre-party; you can pre-game with us.”

Plaza District hosts LGBTQIA+ nonprofit organizations that will be on hand to provide information and goodies, including featured partner Freedom Oklahoma.

“Plaza is a place where people are encouraged to be themselves, there are LGBTQ-owned businesses, and it is a place where everyone is welcome,” said Allie Shinn, executive director of Freedom Oklahoma. “What they recognize is that being welcoming to all might not be enough. We also need to be promoting voices that are fighting for the entire city to get there.”

“We’re so excited to see districts all over the city embracing pride,” Shinn said. “Ultimately, Pride is an incredibly important celebration and protest. It is both a celebration of LGBTQ folks to live as their authentic selves and a protest of all of the structures that make it so difficult for that to be a reality. We’ve come a long way but still have a long way to go, of course, to have full equal protection under the law, but when we see the city of Oklahoma City responding the way they are by having Pride pop up in places like the Plaza, we know we’re making progress.”

Oklahoma City native GWIZ plays on a stage outside Bad Granny’s 7 p.m.-8 p.m. GWIZ, which is led by Garland Alyssa Moore, will be playing a mix of pop, synthesizer and guitar work, music from an LP that will be released later this year or early 2020.

“I’m stoked to play the Pride on the Plaza,” Moore said. “Me and my friends used to play in bands [in the Plaza] in like 2010 and 2011, and it’s fun to play there, especially how much the district has grown and changed. It’s definitely refreshing they’re doing a Pride on the Plaza event. … It’s going to be cool to play at Bad Granny’s. That was the first venue my friends and I would frequent.”

Moore recently relocated from Oklahoma City to Los Angeles. She performs at Pride on the Plaza with a full band before flying to Oakland for a DJ set the next day.

Moore is finishing the first GWIZ album, GWIZ of the Stars, which incorporates more of an electronic feel than previous work, building off the instrumental track “Crossroads,” which was released last year and has an yet-to-be released music video filmed at Crossroads Mall. GWIZ of the Stars will be released in the second half of 2019 or early 2020.

“It’s really going to be something,” Moore said.

Editor's note: A previous version of this story incorrectly listed GWIZ as GWiz, and misidentified the location of the GWIZ DJ set as Oregon instead of Oakland. A new version clarifies that GWIZ of the Stars is the first GWIZ release.