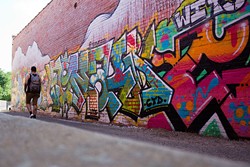 Oklahoma City is already home to a variety of murals, but two local artists are redefining the process in which the art is brought to the streets. Kris Kanaly and Dylan Bradway are the co-creators and curators of a mural rotation project in the Plaza District.

Plaza Walls is an ongoing event in the district located along NW 16th Street. An alleyway hosts a collection of smaller murals, while a wall along Indiana Avenue boasts the largest, allowing for a 600-foot mural. Coinciding with LIVE! on the Plaza, the Plaza Walls exhibit features a new artist every second Friday of the month.

Kanaly and Bradway differ from the city’s other muralists in how they not only take part in painting on the walls, but also curate the walls as an exhibit. The two artists oversee and tend to the alleyway as if it were a gallery.

Previously, artists would have to wait weeks, if not months, to get the proper permits from the city to legally display their art on walls like these, but this wasn’t an option for Kanaly and Bradway. They needed the process to be quicker and allow artists that were visiting or had time constraints to have a place to paint.

They needed to have the ability to choose artists and regulate the exhibition spaces themselves, rather than having every artist go through the lengthy process with the city. So they drew up a plan to present to the Oklahoma City Planning Department’s Office of Arts and Cultural Affairs.

“Being mural artists as well, they both possess vast knowledge about the subject matter of urban street art murals, the artists who typically carry out murals, appropriate materials and equipment [and] types of styles,” said Robbie Kienzle, liaison for the Office of Arts and Cultural Affairs. “They had conducted a great deal of research to develop a curatorial plan that they wanted to execute at this site. It’s their credentials as curatorial experts and the well-developed plan for an outdoor exhibition that made this different than a site-specific mural project.” 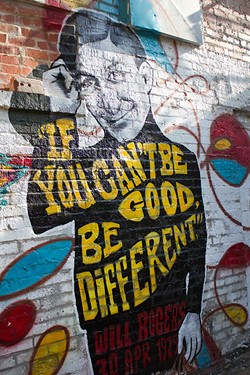 Oklahoma City requires that all murals be reviewed by the Oklahoma City Arts Commission and receive permit approval from the city’s Development Services Department, regardless of whether the work is on public or private property.

“When the certificates of approval and permits expire, the project will be evaluated to ensure that the plan was followed,” Kienzle said. “The midyear report by [Kanaly and Bradway] to the Arts Commission showed that the [Plaza Walls] project had exceeded expectations.”

However, the monthly murals are not the only things to experience at Plaza Walls. In celebration of the project’s anniversary, the curators are planning a mural festival for September.

They plan to have around 20 muralists and graffiti artists simultaneously reinventing Plaza Walls in front of the event’s guests.

Live bands, merchant booths and more also will be a part of the festivities.

The Plaza Walls experience is currently sponsored by Mason Realty Investors and HIS Paint; they provide the alley space and part of the supplies needed for the murals. The curators are hoping to gain additional sponsors. Kanaly believes the murals add a sense of pride to the community and serve as great promotional tools for local businesses.

“I love to see people taking selfies or taking senior pictures or pictures with their families in front of our murals,” he said. “They take those pictures and share them with everyone, and it just helps spread the word.”

Kanaly thinks this might be something sponsors can capitalize on, as well. By giving local artists the opportunity to showcase their talents through the company’s advertising, they could create work with more curb appeal than the everyday billboard.

In doing so, the company’s brand would become one of the works of art that people love to share on social networks.

Kanaly said he would love to see “an Integris or OU Medical Center” give back to their communities by sponsoring local artists.

To stay up to date with what’s coming to the walls, follow @plazawalls and hashtag #plazawalls on Instagram.

Print headline: In the paint, Plaza Walls gives local artists the opportunity to showcase their art as murals in the Plaza District.

LIVE! on the Plaza