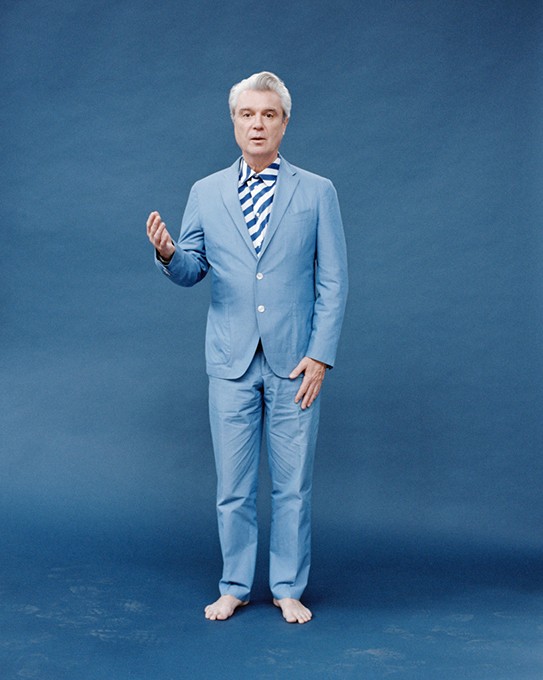 Harsh polarization and general unrest have infiltrated many aspects of the modern world, but for at least one night, David Byrne will bring a piece of utopia to Oklahoma City.

The musician and renaissance man’s one-of-a-kind American Utopia World Tour has already dazzled over a dozen eager audiences across North and South America, and soon, local fans will be able to count themselves among those who have seen what the former Talking Heads vocalist has called his most ambitious performance since the filming of 1984’s Stop Making Sense.

Byrne’s show is set to begin 8 p.m. April 25 at The Criterion, 500 E. Sheridan Ave. Art-pop vocalist Perfume Genius, who played the downtown venue six months ago on tour with The xx, opens the show.

When it’s all said and done, Byrne’s massive world tour will have played at least 80 dates. But OKC should nonetheless consider itself fortunate to host at least one of them.

The setlist will be more or less a 50-50 split between Talking Heads classics (tunes like “This Must Be the Place (Naïve Melody),” “Once in a Lifetime” and “Burning Down the House”) and new songs from American Utopia. The production value is high and theatrical, with large stage pieces wheeled in and a variety of lighting tricks.

However, the most impactful visual component to the show is its great openness. Every performer in Byrne’s vibrantly diverse 12-player band is completely mobile. The stage is free of all monitors, amps, stands and stationary equipment. Everyone on stage dons the same uniform: an all-gray suit and bare feet.

But with that gap of time in mind, it certainly seems that now is the time for proper appreciation of Byrne’s tremendous career. He is far from retired, but it’s hard to know how he’ll choose to spend his time next.

On the American Utopia song “Every Day Is A Miracle,” Byrne muses that “a cockroach might eat ‘Mona Lisa’” and that dogs have no concept of religion or who the pope is. His lyrics feel whimsical on the surface, but they also point toward a liberating truth: Many of the things society values are only significant because humanity has collectively decided that they are.

There are definite points in the album where Byrne is blatantly political. “Dog’s Mind” draws parallels between human preoccupation and dogs in a park, lost in their own world. Byrne sings about a government, press corps and people who play into a president’s hands when it’s clear that things have gone off the rails. And even when there is dissent against his words or actions, those people are still playing the same game. When positions of power are switched, the game doesn’t go away; the roles are just reversed.

Byrne’s lyrics on the song describe our reality as a place where nothing matters and the truth has lost its bearing.

“We are dogs in our own paradise, in a theme park of our own,” he sings. “Doggy dancers doing doody; doggy dreaming all day long.”

It’s a common tendency to view any marginally political album that has come out since 2017 as an artist’s “Trump album.” But that is not really the case with American Utopia. Byrne has said in past interviews that much of this project was written before the results of the 2016 presidential election were known.

Byrne’s album speaks to issues seeded deeper than any one administration, though he has made it clear that he is no fan of Trump. The project highlights society’s inherent faults while also hinting at remedies and reminding listeners to keep cheerful.

Alongside the release of American Utopia, Byrne has been taking time to point out reasons for optimism in a sea of depressive headlines and cable news outrage. A lecture he gave at The New University in New York City was published on YouTube in January. His speech, titled Reasons to Be Cheerful, lists aspects of global society that could point us toward a better tomorrow. His lecture corresponds with his new website, reasonstobecheerful.world, which features in-depth news articles Byrne has read and found uplifting or promising.

[American Utopia] highlights society’s inherent faults while also hinting at remedies and reminding listeners to keep cheerful. tweet this
His lecture points to a number of ways in which day-to-day life could be improved, like the use of cycling as an alternative to car-driven transit culture or the viewing of drug use as a health issue instead of a criminal one.

On his Reasons to Be Cheerful website, Byrne notes that he often finds the state of the world depressing. He ventures that many other have felt the same way.

“It doesn’t matter how you voted — on Brexit, the French elections or the U.S. election more than a year ago — many of us of all persuasions and party affiliations feel remarkably similar,” Byrne wrote. “This feeling is not confined to one side of the political spectrum.”

In an interview with Vulture, Byrne said he began working on his Reasons to Be Cheerful project around the same time as his new album, but they were not necessarily intended as companion pieces, even if they carry similar sentiments.

“There was no obvious connection,” Byrne said. “Sometimes you don’t realize what you are doing is about until you’re getting near the finish. You’re almost done, and then you realize, ‘Ah!’ You get the perspective on it.”

Instead of focusing on however bleak the world seems at the moment, Byrne instead asks whether there is a new way to approach the way we operate within society. And he does it all with a little dance, a knowing wink free from the shackles of perceived permanence.

“We’re only tourists in this life,” he sings on “Everybody’s Coming to My House.” “Only tourists, but the view is nice.”