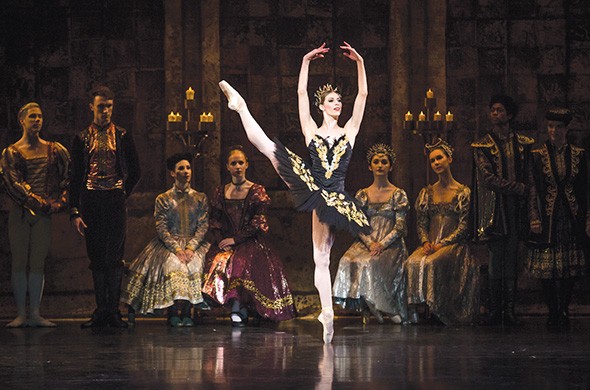 Oklahoma City Ballet dancers Courtney Connor Jones and Sam Jones don’t remember the first time they saw The Nutcracker, but they have a daily reminder of a performance three years ago: their daughter, Gwyn.

“She’s a Nutcracker baby,” Sam Jones said. “I was doing a guest performance of Nutcracker, and it was scheduled the same time as Courtney was due. So she went into labor, and after the baby was born, I went straight from the hospital to the theater and performed Nutcracker. It was not my best performance.”

The Joneses joined OKC Ballet in 2017 after several years with Cincinnati Ballet. While Courtney Connor Jones and Sam Jones estimate they’ve danced in about 10 productions each of Pyotr Ilyich Tchaikovsky’s classic Christmas ballet since the ages of 6 and 7 respectively, this year will mark their second appearance in OKC Ballet’s annual performance.

Courtney Connor Jones, a principal dancer, and Sam Jones, a member of the corps de ballet, will perform the pas de deux duet for the Sugar Plum Fairy and Her Cavalier together as well as in the ballet’s Arabian and Russian dances, respectively. After Gwyn was born, rehearsing for major productions like Nutcracker, which requires the Joneses to train and practice as a full-time job, became more difficult.

“In the very beginning, sleep was an issue,” Courtney Connor Jones said. “We were really tired. I was so tired. I couldn’t learn any combinations because I was just so tired.”

But as they began to adjust to their new sleep schedule, or lack thereof, Gwyn became an energizing source of renewed motivation.

“Probably most people say this about their children, but they make you better because it gives you perspective on life,” Courtney Connor Jones said. “Obviously, she’s the most important thing, so it helps me, and I think both of us, just kind of relax a little bit. If you don’t do your pirouette perfectly, it’s not the end of the world like it was when you don’t have a child. At least that’s how it’s been for me, but she also does give me the drive, I think, especially because she does love ballet way too much. All she wants to do is watch ballet videos and dance all day long. So it actually is really inspiring me to be a better ballerina. I don’t know. It’s just given me almost like a childlike excitement about the ballets we do and even just doing Nutcracker again, I’m so excited because I know that she loves it. All the kids out there love it.” 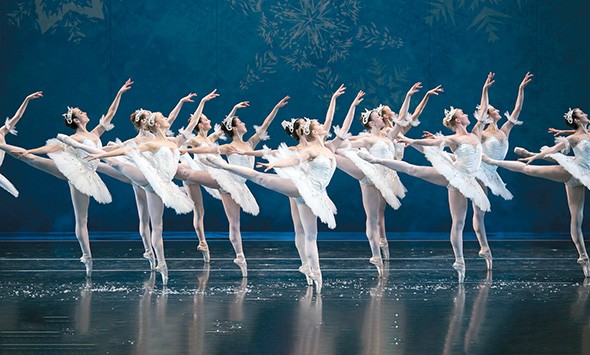 The Nutcracker, which follows young Clara from her parents’ Christmas party to a fantastic dream world where anthropomorphic wooden soldiers battle giant mice and sugar plum fairies really do dance, premiered in Saint Petersburg, Russia, in 1892, but it gradually evolved into a worldwide phenomenon in the 20th century.

“It’s become a holiday tradition,” Sam Jones said. “It gets kind of put on people’s lists around this season like getting together the family and having a big meal, like decorating the Christmas tree, all of these holiday traditions. It kind of worked its way into those, and I think that’s sort of why it’s taken off the way it has.”

The Nutcracker is also an annual tradition for dance companies, with some mounting more than one production a year. OKC Ballet recently returned from performing The Nutcracker in Colorado Springs, Colorado, over Thanksgiving weekend. The ballet’s five performances with Colorado Springs Philharmonic abbreviated the rehearsal schedule for OKC Ballet’s own production at home to two weeks, but the dancers’ familiarity with the material makes a shortened prep time workable.

“There is definitely a comfort in Nutcracker because you’ve been doing the steps already,” Courtney Connor Jones said. “This year, it was really nice having already performed it. Actually having only two weeks of rehearsal wasn’t that big of a deal because I was like, ‘Oh, I’ve done this before.’ I remember my corrections from last year, so I can already start off applying those right away. I know what it feels like onstage, so it’s not as scary.”

However, the familiarity with the material can sometimes lead to boredom.

“There’s both sides to the coin because it’s comfortable because you know it, but it’s not quite as exciting as doing something new,” Courtney Connor Jones said. “We know it’s there every year. It’s never going to not be there. But I have to say, now that I’m not doing some of the corps things like the snowflake and the flower dances and things like that, now that I’m removed from those rehearsals, I love watching it. I think it’s so beautiful and the music is so gorgeous. Sometimes when you’re in it, it just kind of feels like drudge work. You don’t appreciate it as much.”

Many dance companies add their own embellishments to the ballet in an attempt to modernize it.

“They get real creative,” Courtney Connor Jones said. “Our former company, they had a poodle, and it was more of a star. It was a child playing a poodle, and she was a bigger deal than the actual nutcracker.”

When the Joneses came to OKC last year, they were pleased to discover Mills’ staging was a more traditional version of the ballet.

“The version here is very unironic, which is nice,” Sam Jones said. “There’s no sort of winking at the audience and being like, ‘Oh, look at how silly this is.’ It’s just ballet, and there’s nothing wrong with that. There’s nothing to be ashamed of.”

The widespread familiarity with The Nutcracker and its simple storyline make it more accessible to audiences who aren’t as well versed in ballet, offering a less intimidating introduction to the art form.

“I feel like every year, someone tells me, ‘Oh, this is my first ballet,’” Courtney Connor Jones said. “It’s the holidays, so people give it as a gift or it’s a family tradition. … So I think it holds a special place in a lot of people’s hearts because it’s the first one they saw.”

Like Mother Ginger’s children, drawn out from beneath her massive hoopskirt to dance to Tchaikovsky’s timeless score in Act 2, new ballet fans are created every Christmastime, and for the Joneses’ Nutcracker baby Gwyn, the magic isn’t just confined to the holiday season.

“Last year, we listened to ‘Mother Ginger’ until about March or April,” Courtney Connor Jones said, “daily and on repeat. That was a little rough.”