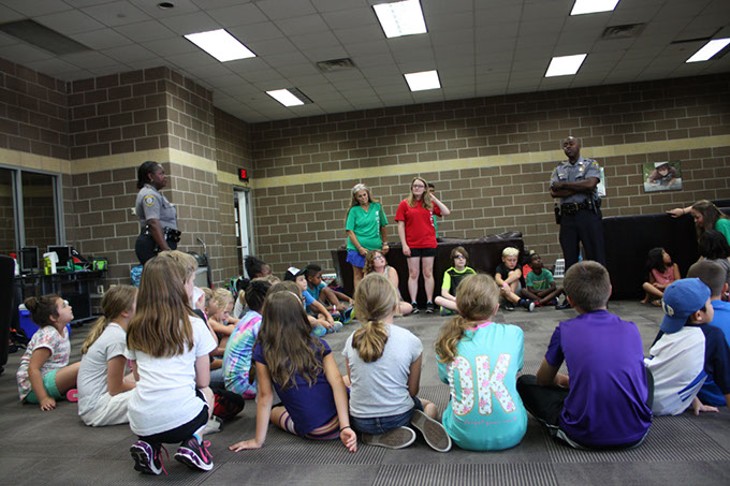 Growing up in an Oklahoma City suburb, Echols believes he was fortunate to interact with police at his school, Ridgeview Elementary, located in the city’s northwest quadrant. There, officers dropped into classrooms and presented the D.A.R.E. (Drug Abuse Resistance Education) program.

“My first interaction with police was with an officer teaching us about drugs and safety,” Echols recalled. “I never had a negative concept of law enforcement. … I grew up in an environment where police kept the community safe.”

Echols said his experience isn’t unique to him — far from it, as the school-based drug use prevention program has been taught in countless schools since 1983. Often, school buildings serve as initial meeting spots for youths and police through school resource officer (SRO) programs. According to the U.S. Department of Justice, there are 19,000 SROs in schools across America.

However, not everyone grows up understanding law enforcement’s role or first meets officers in positive settings. Some hold viewpoints that law enforcement only comes around when there is trouble or to start trouble.

His positive childhood encounters inspired him to join the Oklahoma City Police Department (OKCPD). The master sergeant serves in the police community relations division as an SRO for Oklahoma City Public Schools.

Echols’ message and cheerful demeanor dispels any hesitation or fear of police to the children he interacts with daily.

For the past 12 years, Echols has worked to strengthen the bonds of trust between youth and police. A large part of his job is to ensure youth understand the role of police, which is to protect and serve the community.

“What do police officers do?” Echols asked nearly two dozen children seated in a circle in Earlywine Park YMCA, a YMCA of Greater Oklahoma City location.

A young girl excitedly raised her hand. When called on, she told Echols and her peers that police “chase bad guys,” issue tickets and direct traffic.

The comment sparked further conversation. Echols added that an officer’s job is to keep everyone safe.

Often, Foster sees Echols swinging a pingpong paddle, playing the card game UNO or diving from a dodge ball. Echols is known for walking around campus, interacting with teens and other youths not enrolled in the camps.

Group discussions call for Echols to explain an officer’s role. Some lessons include visits to the parking lot to check out his patrol car. Small groups and one-on-one time allow Echols to teach character skills, such as courage, standing up for what’s right and conquering fears. He answers a lot of questions, including how fast a patrol car goes and how to place handcuffs on a suspect. Some questions go deeper, like what keeps Echols wearing the badge.

“These kids are actually thinking about the obstacles we experience on the job,” Echols said. “‘Do you like it? Is it hard? Do you ever get scared? How do you deal with fear?’”

The YMCA looks to extend the partnership and invites officers back when school is out for breaks and summer vacation, Foster said.

As Echols sees it, shooting hoops or joining in during a camp song is a step toward transforming future interactions between law enforcement officers and youth.

“Police work is a complicated job; it is a volatile job right now,” Echols said. “More understanding has to happen between the community and the police. The only way that happens is if we let relationships be built. The wonderful thing about kids is we get to build those relationships early in their lives. As they grow up, they grow up with us. They get to learn about us as people and police officers.”