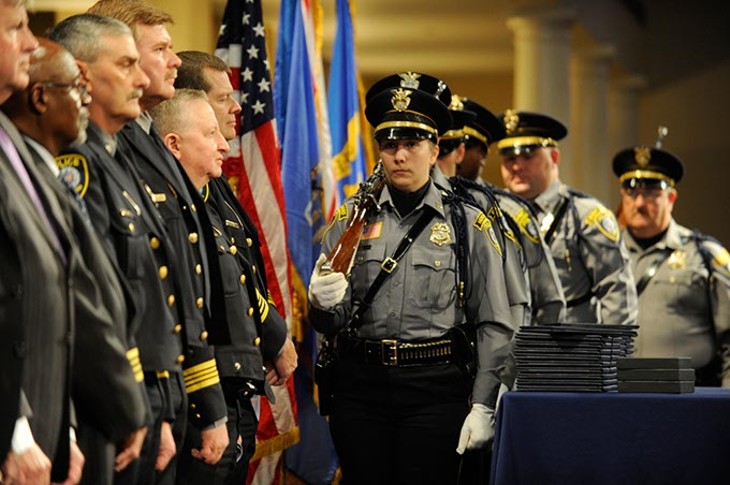 Kelly Fry was nervous, proud, scared and a little teary-eyed.

His daughter, Rebecca, was one of 41 Oklahoma City Police Academy graduates, a fresh group of men and women who will hit the streets in coming weeks.

“It’s tough to sit and watch your daughter, the pride of your life, walk across the stage to take a job knowing it is potentially as dangerous as it could be,” Fry said. “It’s tough.”

Rebecca was one of six female graduates in a class that also included five bilingual officers and four African-Americans — figures that are important as police departments across the country look for ways to diversify, especially in urban communities like OKC.

“Obviously, there are a lot of challenges [to being a police officer] and the career isn’t for everybody,” said graduate James Runner. “But for the people it is for, it’s a calling. It’s an honor.”

In a time when YouTube videos of officers using force in questionable ways and media reports that can paint police as callous individuals are readily available, a police academy graduation offers a raw look at the pure motives many officers have for joining the force.

“These guys have a big heart,” said Cpt. Juan Balderrama, a member of the department’s media relations team. “You have a bunch of eager people here. They are doing this not to get rich, not because its safe but because they want to make this a better place to live.”

New graduates enter a world where minorities are arrested at higher rates than whites, where mistrust of police appears to be at an all-time high — Pew Research reports 65 percent of Americans believe department only of a fair or poor job at handling officer accountability — and politics and cable news have turned a conversation about police actions into nightly talking points.

These new officers will not play a part in the national discussion on police actions, but graduate Alma Deloera said each officer plays an important role in building trust in the community.

“It’s up to us to continue building trust,” said Deloera, who is fluent in Spanish.

The desire to serve the community, which new graduates say led them to the complete the 28-week police academy, is evident to their family members who say police officers can often get an unfair reputation. 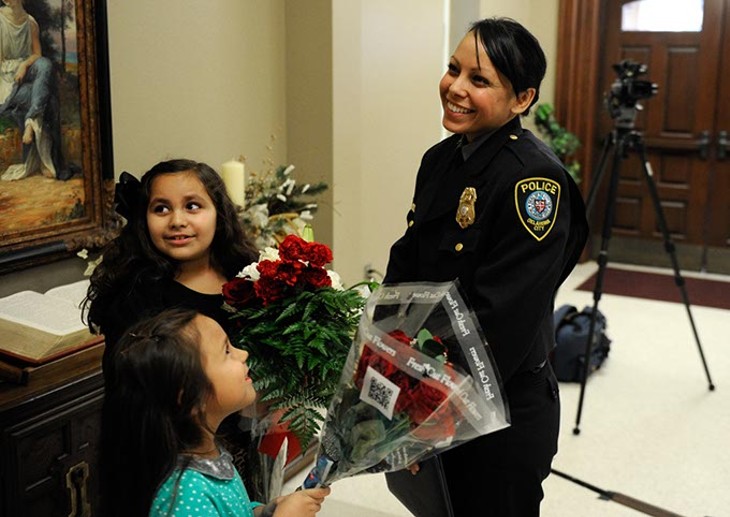 During a time of tension between law enforcement and minority communities, the hiring of police officers who can communicate with citizens who speak a foreign language is important. OKC’s Hispanic population nearly doubled from 2000 to 2010, and while not all of the 110,000 Hispanic residents speak Spanish, a large number do.

“It used to be that we would locate our [Spanish speaking officers] in specific parts of town,” Balderrama said. “But now they are needed in every part of the city.”

Two of the officers to recently graduate from the academy speak fluent Spanish, including Deloera, who will join the city’s bilingual unit.

“We have several officers who speak Spanish and will hopefully be able to call on one of those officers if they are ever needed,” Balderrama said.

Balderrama also said that some officers speak other languages and are fluent in sign language.

Tommy Tran is another new graduate of the police academy and can speak Laotian.

“I can see where some in the Asian population [in Oklahoma City] might not want to talk to the police,” said Tran, referring to the relationship between law enforcement and the community in some parts of Asia. “But having more Asians on the department helps that. I just think that its very important in general for our department to be diverse. It helps relationships between us and the community.”

Prior to the academy graduation, the Oklahoma City department was 6 percent African-American, while the city as a whole is close to 15 percent. Black officers in the department have said recruiting in the minority community can be a challenge because of the stigma some minorities have toward police.

In addition to a diverse police force, the OKC PD says it has various programs designed to build relationships with local youth. There is also an effort to be transparent, Balderrama said.

“We try to be very transparent; we put the good, the bad and the ugly out there,” Balderrama said. “If the community feels we are transparent, they are going to trust us more.”

Print headline: Proud to serve, Police academy graduates join the force with hopes of positivity and building relationships with the communities they will serve.