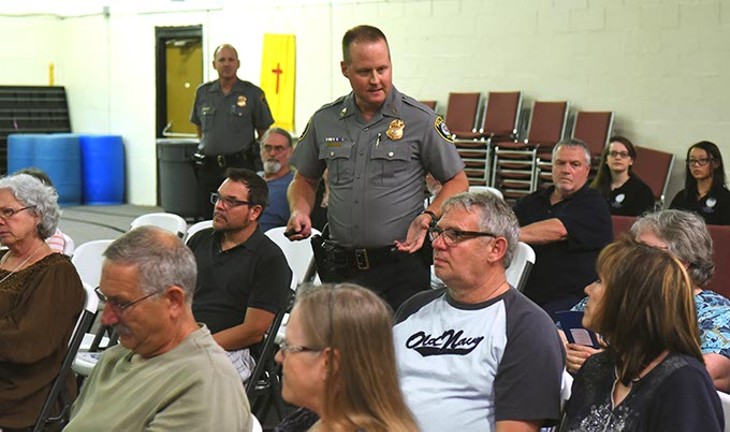 About half of nine entrances into a northwest Oklahoma City apartment complex in a high-crime neighborhood were closed recently after police officers met with its manager.

“By the time we get on scene, the offenders are gone,” said officer Robert Skalla, explaining how easy a getaway can be for any burglar who has several escape routes out of an apartment or home they target.

Skalla, along with other members of Oklahoma City police’s Hefner Division, met with south OKC residents last week to facilitate community crime prevention through environmental design (CPTED), or the concept that criminal activity can be reduced through simple changes in planning, design and management of public spaces.

“It is big on the East Coast, it’s big on the West Coast and it’s gaining momentum here in Oklahoma,” he said. “It’s basically the idea that the perception of the environment dictates criminal behavior.”

During the forum, officers showed how something as commonly overlooked as overgrown bushes can block the street view of a home’s windows and front door, giving criminals more places to hide when targeting a residence.

“We want any would-be offender, whenever they come on to your property, to feel like they are being watched,” said Robert Henderson, an OKC law enforcement and intelligence officer.

“If you live in a rundown neighborhood where 80 percent of the homes are rundown, we are going to have a crime problem … When we come to your home to do a burglary report, it will take one, two, up to three hours ... of being out of service,” Skalla said. “There are certain things that you all can do in your home to help your police department so we have more time to go after the violent offenders.” 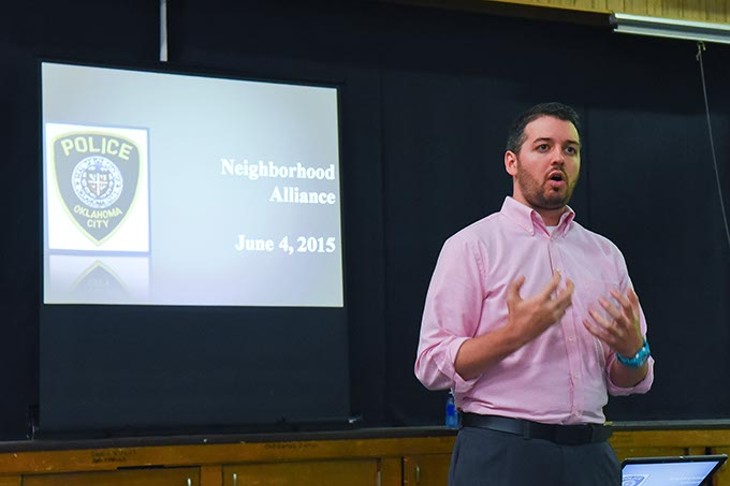 Ryan Baker is a programs director with Neighborhood Alliance of Central Oklahoma, which co-hosted the forum. He said educating the public about the importance of placemaking and neighborhood design in crime prevention then empowers communities, which can help sway the city to incorporate more strategies, especially as a new general obligation bond approaches.

“Placemaking is stuff that a lot of young urbanists talk about, but to many, it feels more like expensive, publically funded [projects] for millennials,” Baker said about many concepts that are centered on walkable and bikeable neighborhoods. “In reality, so much of what they said demonstrates that there are really viable benefits.”

Police officers also showed how cities across the nation utilize community-minded developments like public art and increased foot traffic on neighborhood sidewalks as ways to beautify while reducing crime.

“[Traffic calming and public art] are two things there doesn’t seem to be enough momentum on, but we’re starting to see the wider benefits of economic, social, security and safety through talks like this,” Baker said.

Dexter Nelson, head of OKC’s Hefner police division, said Henderson and Skalla were the only two trained officers in the department in the specialty of CPTED, but there was an effort to expand the program.

“We can’t do this by ourselves,” Nelson told the southside crowd. “We are asking the community to go back to the days of old and look out for each other. Get to know your neighbors, talk to them and find out ways to improve the environment in a way that deters crime.”

Nelson said police were also working with the mayor and city council in an effort to promote changes in ordinances and building requirements that consider CPTED concepts, including reducing the number of apartment buildings in a square mile.

“What we really need is this information to distribute to the grassroots level,” Baker said. “We want neighborhoods, residents and voters to start talking about these things because that’s when it really starts to gain momentum. What we need is people, the ones who vote, to understand the benefits of these things and to ask for them.” 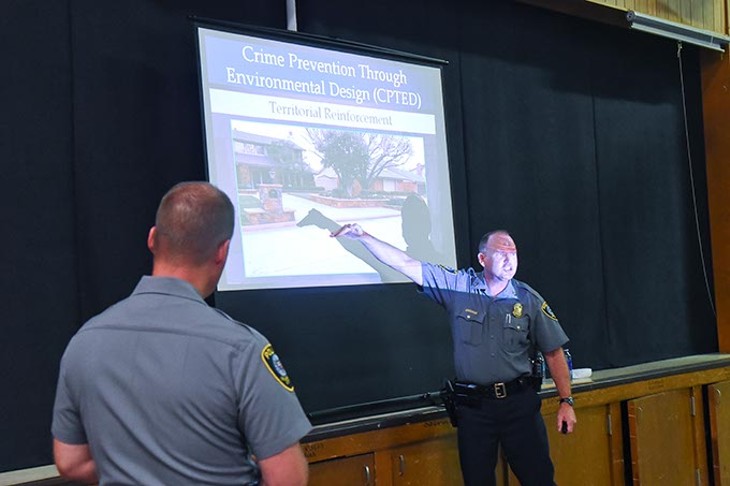 • When home, open your blinds to send a visual cue that someone is there.

and porches should be lit, preferably by white LED bulbs, which enhance colors

and make them more visible.

• If someone tries to enter your home while you are there, call police. Also, make

noise inside to let them know the home is occupied.

• Encourage neighborhood design that spurs walking and front-yard and front-

Print headline: Planned prevention,Police work with residents to teach them how communities can reduce crime through better design.