Pollard Theatre peps up with Bring It On: The Musical 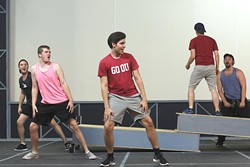 Tightly controlled body movements, pitch-perfect timing and an incredible amount of teamwork — is it a musical or a cheerleading competition? For Pollard Theatre Company’s upcoming production of Bring It On: The Musical, it’s both.

It runs Friday to July 1 at The Pollard Theatre, 120 W. Harrison Ave., in Guthrie.

At Jackson High School, Campbell finds herself in competition with Danielle, another queen bee, according to director Timothy Stewart. Danielle serves as the perfect foil to Campbell, who struggles to negotiate her past, present and future.

“She tries to find her place in that world and to hold on to her past, too,” Stewart said of Campbell’s abrupt transition to life at Jackson High.

As she negotiates the politics and melodrama of high school, a competition in itself, she also pulls together with Danielle and her other peers to assemble a cheer team that rides all the way to the national competition.

Although the musical is mostly comedic, Stewart said that it has moments of poignancy.

Bring It On dives into themes of friendship and nuanced depth, of “looking deeper than what’s on the surface,” Stewart said.

The family-friendly musical, full of stories of self-discovery and teamwork, also validates the hard, often overlooked work of competitive cheerleading, which Stewart said some people might consider superficial.

“There’s a deeper side to these people and the competition and the athleticism that goes into competitive cheerleading,” he said.

Stewart worked along with choreographer Hui Cha Poos and cheer choreographer Barbie Parker to ensure the authenticity of the cheerleading moves. While Stewart said most of the actors were already familiar with singing, acting and dancing, the moves required for Bring It On necessitated a cheer camp.

Actors learned how to perform stunts, lifts and moves like the back tuck.

“They leave with bruises and scrapes and sore muscles, but they keep coming back,” he said.

Alongside such physical mastery, Bring It On brings a set of musical and lyrical gymnasts to its score and script, including Lin-Manuel Miranda, Tom Kitt, Amanda Green and Avenue Q writer Jeff Whitty.

Although Manuel Miranda worked on Bring It On in his pre-Hamilton years, Stewart said audiences will still spot traces of his style.

While Bring It On is inspired by the 2000 film of the same name, the show is not an exact translation; rather, Stewart said it functions as “an entity all to itself.” The musical premiered in Atlanta, Georgia, in 2011.

“It’s a story about friendships and high school and finding your way, so I think that’s always going to be a topic of importance,” he said.

Print headline: Cheering up, Pollard Theatre Company brings blood, sweat and cheer to the stage in Bring It On: The Musical.

Bring It On: The Musical