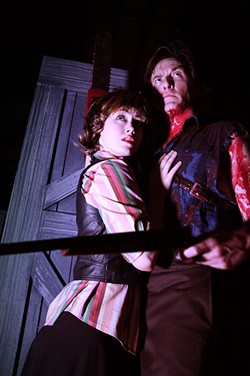 The dead come to life on stage in The Pollard Theatre’s production of Evil Dead: The Musical. Based on the cult film series of the same name directed by Sam Raimi, this lively adaptation tells the story of five college kids who travel to a cabin in the woods and accidentally unleash an ancient evil. It marks the directorial debuts of Pollard company members and longtime fans of the films Jared Blount and Jennifer Rosson.

Blount said that one of the biggest challenges has been finding the right tone for the Pollard stage.

“In past productions, the show has played primarily to fans of the movies who, in some cases, aren’t as interested in the overall production value. It was more like a party,” he said. “When we were hired, our first discussion was about engaging the party atmosphere while still honoring the story and characters.”

He said that anytime you do this kind of high camp, you have to strike a delicate balance.

“The great thing is that we’ve had the time to explore,” Blount said. “We’ve played with going too far and not far enough, and it really helped us to hone in on the fun.”

One of OKC’s most prolific actors, Wil Rogers, will step into the iconic role of Ash, originated in the films by Bruce Campbell. Rosson said that Rogers, also a fan of the films and Campbell’s performance, channeled Ash without it ever feeling like an imitation.

The Pollard will also preserve the Splatter Zone, a mainstay since the show debuted.

For those not interested in wearing the show home with them, Rosson said that special care has been taken to ensure that audience members beyond the third row should be safe.

For those squeamish about the sight of gore, Blount said the blood is played for laughs, not to gross out the audience.

“This type of comedy benefits from being over-the-top,” he said. “What we’ve found is that the more over-the-top the blood and gore are, the funnier it becomes, rather than being disturbing.”

Rosson said it’s not necessary to have seen the films to enjoy the musical.

“This show is its own animal. Knowing the films just adds another level of humor and familiarity,” she said. “The virgins may find themselves becoming part of the fan base, while fans are looking for all the little Easter eggs.”

On the flip side, Rosson said that fans should find it easy to embrace the songs.

“The films, especially Evil Dead 2, are so campy that it feels like the only things missing are musical numbers. And, lo and behold, now they have musical numbers,” she said. “It’s perfectly ridiculous and undeniably fun.”

Print headline: Dead rising, Evil Dead: The Musical offers a good chunk of whimsy to go with your flesh-eating zombies.

Speaking of Evil Dead: The Musical, the Pollard Theatre