Pollard Theatre's production of The Producers runs through May 6 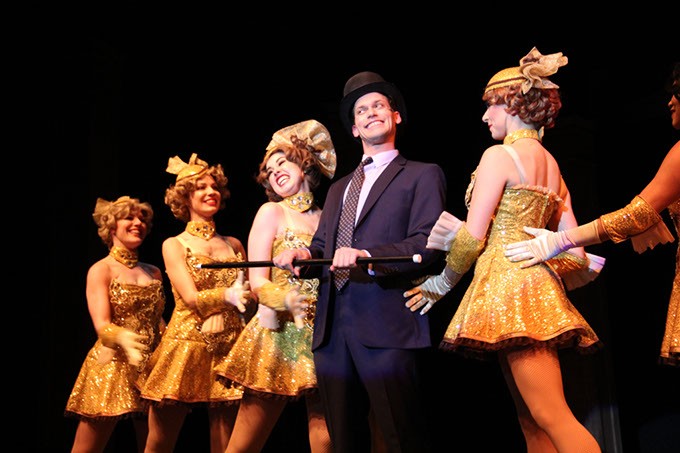 Theater producers may pine for national recognition before their projects fall flatter than a missed note, but rarely the other way around. But that’s precisely the plot of Pollard Theatre Company’s production of 12-time Tony Award-winning Mel Brooks musical The Producers.

It runs through May 6 at Pollard Theatre, 120 W. Harrison Ave., in Guthrie.

Peering behind the curtain, The Producers tells the tale of Max Bialystock (played by W. Jerome Stevenson) whose failed musical production of Hamlet puts him in financial trouble. With the help of his accountant Leo Bloom (Jared Blount), Bialystock hatches a plan to purposefully put on a low-budget production of Springtime For Hitler and pocket the change — but things don’t go as planned.

“It’s a laugh riot,” said director Matthew Sipress. “It’s the most fun rehearsal I’ve ever been in.”

And Sipress, originally from Delaware, has been through a lot of rehearsals. After starting community theater at age 15, Sipress came to Oklahoma City University (OCU) to major in dance. He dropped out in 1991, a decision he considers fortuitous.

“If I hadn’t, I never would have done my first production of Hello, Dolly! in Paris,” he said.

Sipress eventually worked on both the national tour and the 1994 Broadway revival of Hello, Dolly!

After participating in the Radio City Christmas Spectacular in 1999-2000 and two tours of Evita, Sipress eventually returned to OCU to earn an entertainment business degree. He graduated in 2010.

Now, Sipress works full-time as Lyric Theatre’s associate production manager and company manager. After working with W. Jerome Stevenson on a production of Sweeney Todd at Reduxion Theatre Company, Stevenson approached him about directing The Producers.

“I thought it was a great idea,” said Sipress, who also previously directed Jewel Box Theatre’s A Funny Thing Happened on the Way to the Forum.

Playwrights have referenced themselves all the way back to William Shakespeare, who nestled the intentionally terrible Pyramus and Thisbe within A Midsummer Night’s Dream for comedic effect.

Such a well-trod technique depicts theater in conversation with itself, a meta-commentary on performance art. A side effect of this absurdity is, of course, humor.

The Producers derives the latter from many sources, but Sipress said the laughs originate with its creator, Mel Brooks. Initially conceived of as a novel and then a play by Brooks, The Producers finally evolved into a 1968 film and then a 2001 Broadway musical.

“There’s this really beautiful, sincere moment at the end of the show where you realize these two people were actually friends throughout this ridiculous adventure,” Sipress said.

Because of The Producers’ hearty laughs and human stories, Sipress said the show attracts a wide audience.

Fans of Brooks, cynical comedies and theater will each find something to enjoy, Sipress said. The Producers further widens its appeal by pulling from various genres of dance, including tap, ballet and a very special “walker” number performed by elderly women.

“I have such a history with theater, and this is just my little love letter to the Pollard and to the theater,” Sipress said. “You can’t not have fun.”