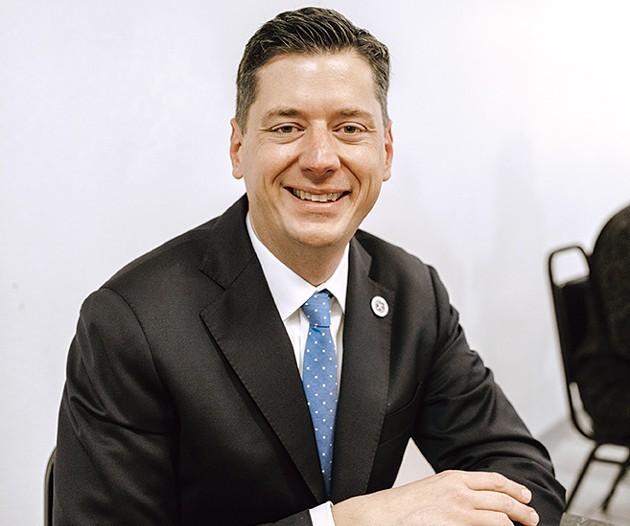 Oklahoma City officials are nearly ready to hear presentations and have in-depth discussions about suggestions for MAPS 4 projects. But as the MAPS conversation moves forward, former Ward 2 councilman Ed Shadid is revealing third-party poll results on the popularity of those project ideas.

Shadid paid SoonerPoll for a study to gauge where OKC residents stand on certain ideas. SoonerPoll collected 406 responses from April 24 to May 9 with a 4 percent margin of error. Greater Oklahoma City Chamber of Commerce conducts its own poll on MAPS projects, but it has historically never released the results. Shadid said he wanted people to have an idea of how much support certain projects had in order to hold city leaders accountable.

“All responses for this study were collected from residents currently living in Oklahoma City,” according to the report. “Results are weighted by age and congressional district and stratified to represent the Oklahoma City likely voting population for a special election.”

Mayor David Holt announced a list of ideas gaining traction — including a soccer stadium, a State Fair coliseum, upgrades to Chesapeake Energy Arena, parks infrastructure investments, addressing homelessness and public transit — during his State of the City speech in January. Holt told Oklahoma Gazette that despite some ideas drifting off the list, things had not actually changed much since.

According to SoonerPoll, which polled residents on nine different projects as well as other MAPS-related questions, a soccer stadium has the least support, while facilities for mental health and substance abuse have the most.

Holt was not aware of the SoonerPoll study but did say he would be willing to say no to a project if a majority of residents were against it.

“Public opinion polling is a factor in all of this for sure. You know, different people sometimes have different data, so that can be a point of contention,” he said. “Some polls are a little more scientific than others, so not being able to really see what you’re talking about, what questions are asked, it’s hard for me to comment on specific poll results that are purported to exist. … If something is truly opposed by a large majority of the city, that’s a different question. But to say that one thing is supported 80/20 and one thing is supported 70/30 and, therefore, the 70/30 is unpopular, well that's not true.”

He said he is not a champion for any specific project at this point but does feel a shift in priorities to dealing with daily challenges facing people like homelessness, domestic violence, mental health and substance abuse.

“I feel like the public’s focus is on geographic distribution of the project, a sense that, though they are still transformative, they’re impacting people where they live and neighborhoods across Oklahoma City,” Holt said. “I think a lot of this initiative is going to be focused on neighborhood needs and human needs and challenges facing our citizens on a daily basis. And I always kind of say that doesn’t mean there won’t be maybe some place for some fun stuff and the kinds of entertainment enhancements that, you know, have been at the core of MAPS 1 and MAPS 3. But I sense a definite shift in balance of MAPS 4, and I sense that’s what the people of Oklahoma City want to see this time.”

Holt expects to release a schedule of public discussion on projects the council is considering sometime this month.

“I envision having the opportunity for council meetings where presentations are made regarding the things that are still on the table,” he said. “We get it out there so that the public is informed about what we’re considering; all of that leading to the potential calling of an election.”

The council is expected to finalize the package at the beginning of September and call a special election before the end of the year.

The SoonerPoll also includes crosstabs that display the relationship between certain demographic groups and how questions were answered. This allows people to see how popular certain ideas are between men and women, with certain political parties or based on age.

Mental health and substance abuse facilities: About 13 percent oppose the project and 83 support it.

Investment in our city parks, such as restroom facilities, athletic complexes and equipment for children and adults: About 17 percent oppose the project and 78 percent support it.

Protected bike lane infrastructure to help decrease our nation-leading fatality and injury rate among bicyclists: About 23 percent oppose the project and 74 support it.

Improvements to the bus system, including new buses and bus shelters: About 21 percent oppose the project and 71 percent support it.

A fund to help bridge the gap in financing historic preservation projects: About 25 percent oppose the project and 62 percent support it.

Electric buses that cost more to buy upfront but save money on operations and maintenance and last longer than diesel buses: About 29 percent oppose the project and 59 support it.

Replacement of the State Fairgrounds Arena costing between $100 and $120 million: About 39 percent oppose the project and 54 percent support it.

An expansion of the downtown streetcar to include additional routes: About 53 percent oppose the project and 41 percent support it.

Soccer stadium in the downtown area costing between $70 and $90 million: About 67 percent oppose the project and 26 percent support it.
See related PDF MAPS_4_Final.pdf