On the exterior of a large van that delivers formula, food and diapers is the message “No baby should go hungry.”

It’s more than a message; it’s the mission of Infant Crisis Services. For 34 years, the local nonprofit has provided life-sustaining formula, diapers and food to babies and toddlers in need through health departments, early childhood centers and WIC offices. In recent years, Infant Crisis Services has taken its primary program on the road, aiding parents and their children who are unable to travel to the organization’s northeast Oklahoma City location. Called the BabyMobile, the van first rolled through Oklahoma County as an outreach effort in 2013, said Miki Farris, executive director of the nonprofit.

Two years later, Infant Crisis Services’ BabyMobile began crossing county lines to locations in Logan, Canadian and Cleveland counties. The BabyMobile brought services to babies and their parents who might have no other community resources to help in times of crisis. The supplies received $100,000 in financing from Impact Oklahoma, a nonprofit philanthropic giving circle. Impact Oklahoma’s women members provided seed money to local nonprofits seeking to make catalytic change in the Oklahoma City metro area.

“What Impact Oklahoma did for us is help us to know that we could expand beyond Oklahoma County,” Farris said. “We could reach a lot of babies that weren’t being reached by going to these outlining counties.”

The success of the BabyMobile outside Oklahoma County spawned the gift from Edmond’s Santa Fe High School, which last year raised money to finance the second van. Now, an Infant Crisis Services’ BabyMobile can be spotted in Oklahoma, Logan, Canadian, Cleveland, Seminole and Lincoln counties.

“I don’t think we would be where we are today with two BabyMobiles going to six counties without Impact Oklahoma,” Farris said.

Impact Oklahoma members — women of different backgrounds, ages and professions — pool their money to make grants to local nonprofits. The idea is that one large contribution can have an immediate impact.

“If 100 people get together and each gives $1,000, we can all make a catalytic change for a nonprofit,” said Jilian Larimore, Impact Oklahoma’s executive director. “That’s what our gifts do.”

The organization dates back 15 years and awarded its first grant of $106,000 to Special Care, Inc. in 2005. During her time with Impact Oklahoma, Larimore has witnessed the organization’s grants thrust strong ideas into action. Some grants support the expansion of established programs; others allow new programs the chance to start. Members are heavily involved in selecting the grant recipients.

“They’ve quietly given a thousand dollars at a time, which has dropped $100,000 grants into the community,” Larimore said. “They are leaders in banking, finance, engineering, medicine and in education. They recognize the needs, and they want to make a difference. They’ve been doing it for 13 years.”

Impact Oklahoma’s giving circle model is on the rise in the United States, according to a new report, The Landscape of Giving Circles / Collective Giving Groups in the U.S. The report estimates that giving circles have engaged at least 150,000 donors nationally, contributing up to $1.29 billion. The number of these giving circle networks, which typically represent diverse communities, faiths, cultures, ethnicities and backgrounds, has tripled since 2007. 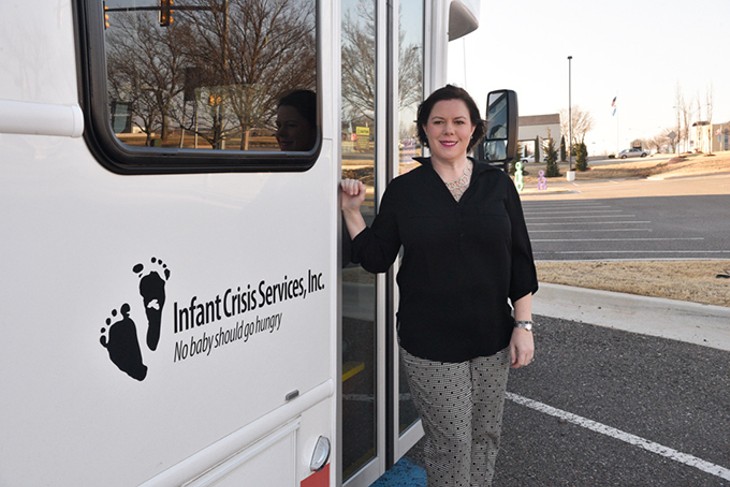 Impact Oklahoma members are required to give $1,000 annually for membership with 100 percent of those dues going toward the organization’s grants. For some members, the dues are part of their annual philanthropy. Others view them as a thoughtful and sacrificial gift, demonstrating willingness to give up something to meet the needs of those less fortunate in their community. Others opt to give more, contributing to the organization’s operational costs.

Since 2011, at least two grants of $100,000 are annually awarded to the nonprofits they choose. Membership money over $200,000 is given as gifts to other nonprofits. Impact Oklahoma has awarded grants to Infant Crisis Services, Regional Food Bank of Oklahoma, Calm Waters, Positive Tomorrows, YWCA, FaithWorks of the Inner City, City Rescue Mission, Peaceful Family Solutions and more. Members seek to fund programs that fall into categories of community, family, health and wellness, education and culture.

The benefits go beyond the receiving nonprofits. Members get a taste of philanthropy, reviewing grant applications, connecting with local nonprofit leaders and learning about the various needs of central Oklahoma charities.

The organization is in its final month of membership recruitment with its 2018 awards announced at an April meeting. As of February, Impact Oklahoma had received 95 applications for grants.

“It multiplies gifts in a way that you otherwise couldn’t do,” Larimore said. “We end up with these dynamic, fully functioning programs reaching our community.”