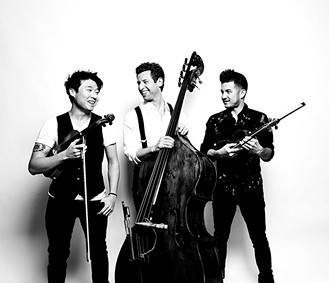 Time for Three has played Carnegie Hall, the Indy 500 and Dancing With the Stars since forming in 2001, but the trio just recently started singing. Newest member and violinist Charles Yang encouraged violinist Nicolas Kendall and double-bassist Ranaan Meyer to add three-part vocal harmonies to their classification-resistant sound after joining the group in 2016. Time for Three famously combines classical music with folk, bluegrass and pop elements, but Meyer said the trio previously considered itself an instrumental outfit.

“I actually sang a lot growing up,” Meyer said. “I was in a lot of community theater and things like that, and I would write my own songs. But then puberty took my voice away. When Charles came into the group, we were like, ‘Well, let’s try it,’ and we started with it and wrote our first song maybe a year and a half ago, something like that, and people were really digging it. So we wrote two or three songs and had a couple of songs written for us, and we went down to Nashville to explore these really high-level songwriter connections, and they thought it was really dynamic.”

The group of classically trained musicians recorded songs for an EP in Nashville and plan to release a single this fall. The trio is scheduled to perform its touring show Joy 7:30 p.m. Thursday at Armstrong Auditorium, 14400 S. Bryant Road, in Edmond.

“It’s kind of a journey of love and struggle,” Meyer said. “We’ll have about eight songs that we sing in the set, and the instrumentals that go along with it are also about that. We generally start out with this song ‘Déjà Vu,’ which is thinking that you’ve seen somebody before, so that familiarity with the person, it’s just sort of common when you’re lusting over somebody, you know? Then we take them into this song called ‘All the Ways You Love,’ which is really just loving the overall person 360. And then it kind of gets into a vulnerability and then a breakup and then it finds its way back into connection and having kids and the journey within that and then the celebration of it.”

Meyer, who founded the group with Kendall and former member Zachary DePue when the three were students at Curtis Institute of Music in Philadelphia, said creating romantic music is far from a new idea, but Time for Three has a knack for reinterpreting classic themes and compositions for contemporary audiences.

“Imagine that; we’re musicians and we’re writing about love,” Meyer said, laughing. “That’s never been done before! But we’re doing it in our own way.”

The show features a mash-up of Guns N’ Roses’ “Sweet Child o’ Mine” with a portion of Gustav Mahler’s Kindertotenlieder song cycle based on poems by Friedrich Rückert about the deaths of two of his children.

“It sort of refers to the way a kid can be such a gift but also traumatic at times,” Meyer said, “the extremes of all that and what that does to a relationship, whether it be positive or negative and everything in between, and it kind of builds off of that. But I think in our case, we just found the uniqueness of how Guns N’ Roses in the ’80s can write about a childhood memory and having a kid where Mahler is writing about the loss of a child and putting those connections together.”

Finding those connections gives Time for Three its distinctive style. In the past, the group has combined “Summer” from Antonio Vivaldi’s The Four Seasons with “Toxic” by Britney Spears and Katy Perry’s “Firework” with “The Princesses’ Khorovod” from Igor Stravinsky’s Firebird Suite. Meyer said distinctions between styles of music aren’t as important as the emotions the music is intended to express.

“Whenever somebody gets really intense about, ‘This genre is more meaningful than that genre,’ that to me is a red flag because I start to wonder, ‘What actually are the differences?’” Meyer said. “Let’s just unpack that for a second. … What is serious music? You’re saying there can’t be seriousness in pop? There’s joy in all music, there’s melancholy in all music, there’s trauma. It’s all there. Fundamental human emotions are what I hope we’re striving for or even messaging when it comes to art and music. And that’s kind of the exciting thing about it. So we just try to look at it kind of from a big picture as opposed to ‘This has to have meaning because it stood the test of time.’ Well, yeah, it does have to have meaning because it stood the test of time, but that’s not necessarily what makes it great. What makes it great is the tradition of artistry and how it’s taken and passed through time.”

The trio’s penchant for combining timeless classics with contemporary hits has made Time for Three popular among music lovers and educators trying to get younger people interested in classical music, but Meyer said that wasn’t the group’s original intent.

“We always just wanted to have fun and just wanted to play music that spoke to us, and I think what that produced was an accessibility to classical music,” Meyer said. “People that wouldn’t always listen to classical music would come to it through Time for Three, but it wasn’t necessarily our objective. … We still play that music at a very high level, but we just simply look at music as music, and not trying to create barriers.”

Adding vocals to some of the songs the trio plays also makes the music more accessible, Meyer said, and gives the show an overlying theme.

“That has sort of evolved what the show has become,” Meyer said. “It was more just like a fun vibe meets a highly emotional melancholic vibe. It was a bit esoteric, and now there’s actually a dramatization and a storyline that goes through it all. It’s like if you’re approaching it from the pop standpoint, it’s just songs that go together cohesively to tell a story, but if you’re approaching it from the classical sense, it’s a libretto. It just depends on what you’re comfortable with, but I think one of the things Time for Three has always strived for is to connect and to bridge all those worlds, so we look at it through both lenses all the time.”

And adding pop songs into a program with weightier classical music helps keep the overall tone from becoming too heavy.

“Every once in a while, you’ve got to get lighthearted,” Meyer said, “or you’re just going to make people sob the whole time listening to you.”