Poe Bouyz House’s food isn’t quite as interesting as its over-the-top exterior. 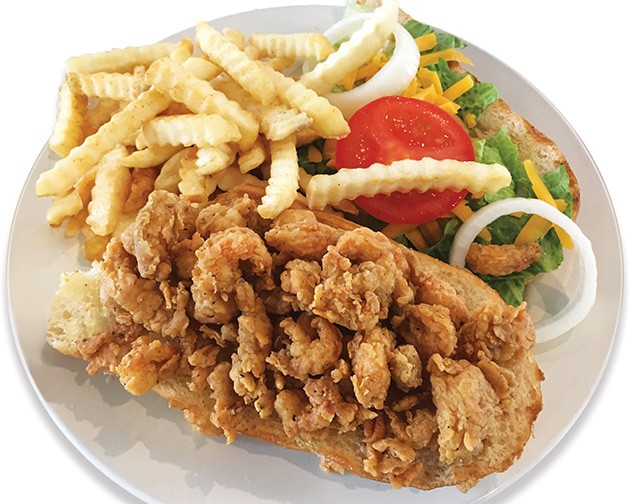 What works:The bread used for its titular sandwiches has a crunchy exterior and pillowy-soft interior.
What needs work:The gumbo misses the opportunity for added flavor, and the sandwich was dry.
Tip:The restaurant is closed Sundays and Mondays.

The most interesting-looking restaurant in Oklahoma City is Poe Bouyz House, 3500 Interstate 35 Service Road. Drivers along the highway have watched for years as the yellow building with a façade that makes it look slanted has come to fruition.

It is the result of years of hard work by Tony Howard, who built the restaurant — complete with a waterfall on its rooftop, Poseidon sculpture and bright red tridents out front — over four years.

I can’t imagine the amount of blood, sweat and tears Howard poured into getting Poe Bouyz House open in late summer 2019. Howard operated his first restaurant, Flip Flops, at 3516 N. Kelley Ave., which expanded to a second location in Del City.

There’s a huge, crooked red door on the front of the façade, but that’s not the actual entrance. Guests enter on the south side of the building through a normal glass door.

For as wild and wacky as Poe Bouyz House looks on the outside, it’s actually relatively austere on the inside. Mostly blank white walls surround an empty entryway except for a floor painted with dolphins. Once you turn the corner into one of the two dining rooms, it’s more mostly empty white walls that give it a very middle-school-cafeteria vibe.

The main dining room has a color-changing universe mural on the ceiling. While interesting, it doesn’t exactly promote its seafood theme.

The alternate dining room has a bar with an interior waterfall, but it wasn’t operational when I walked in for lunch. I’ve heard and read harrowing stories about service and wait time at Poe Bouyz House when it opened last year, which is understandable for any new restaurant getting its footing.

From walking into the restaurant around 12:30 p.m. on a Wednesday, I was out with appetizer and entrée eaten in about 30 minutes, which I’d consider pretty quick, considering there were about six other tables occupied. 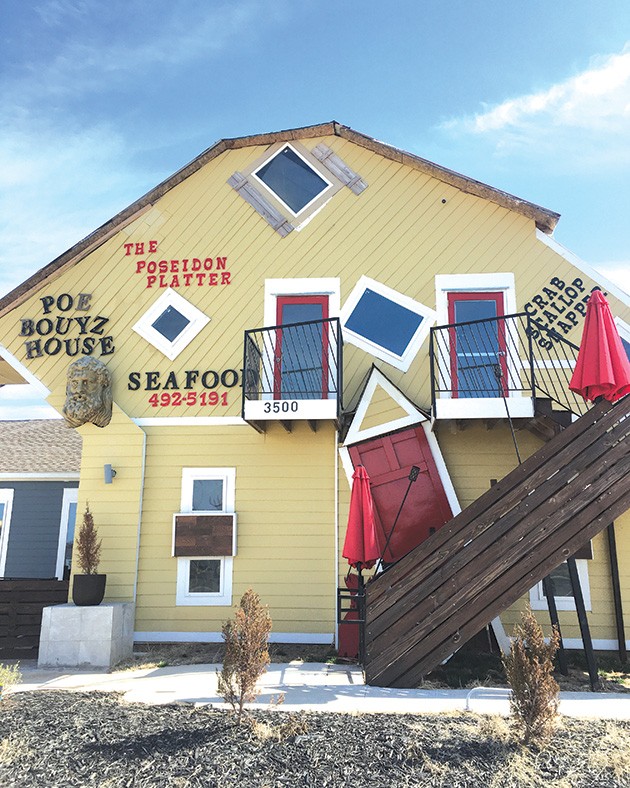 In interviews, Howard is adamant that it is not a Cajun restaurant but one that is seafood-focused. Then why did he name the restaurant using an alternative spelling of the famous New Orleans sandwich?

The rest of the menu continues a faux-Cajun theme with appetizer or entrée portions of chicken and sausage jambalaya ($5-$9), seafood gumbo ($5-$10), two salads, five “poe bouyz” sandwiches (catfish, shrimp, chicken, crawfish, alligator or a combination of any of the two, $12-$14), fried fish platters, grilled fish and a fettuccini Alfredo with shrimp, chicken, crawfish and sausage ($11).

First was the appetizer, an order of seafood gumbo ($5). Before it arrived, the server brought out a piece of toasted French bread drizzled with honey; it was a good sign for the quality of bread used for the sandwich.

The gumbo wasn’t as pleasing. The rice atop the soup appeared to be of the instant variety, achieving both overcooked mushy texture and undercooked crunchy pieces in the same bite. The roux used to thicken the soup was very blonde (meaning it wasn’t cooked very long) and didn’t provide a lot of depth. The soup did have nice seafood flavor with shrimp, crawfish, fish and blue crab in the broth, but it also had a giant piece of crab shell hidden under the rice that occupied 25 percent of the cup in which it was served. I’m sure it offered some seafood flavor, but it took up space from more edible ingredients. 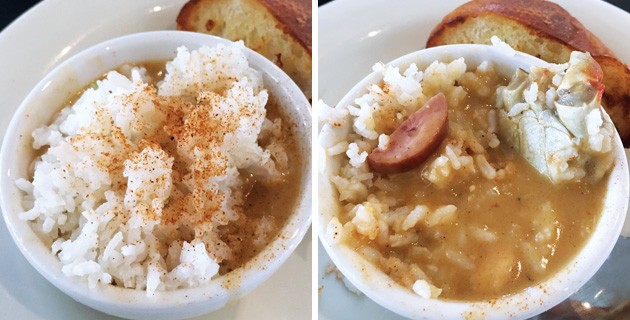 The sausage in the gumbo was not seared before being added to the pot. It’s a step that I understand is probably too time-consuming for a commercial kitchen, but searing the sausage provides extra texture, and if you make the roux out of the rendered fat and fond from the sausage, it provides additional flavor to the dish. It’s something to keep in mind the next time you make gumbo at home.

The most important aspect of a po’boy is a great French roll with a crunchy exterior and pillowy-soft interior. I have ordered a po’boy in Oklahoma City and had it served on essentially a hot dog bun. (Looking at you, Cajun Corner.) Poe Bouyz House achieves the primary goal of serving an exquisite roll for the sandwich.

I ordered the crawfish “poe bouy” because it is the favorite filling of those offered on the menu. It was only later that I noticed the restaurant has a fried oyster platter. I’m sure I could’ve gotten them as a sandwich, but it’s a missed opportunity to offer an oyster “poe bouy” because the crawfish had almost no flavor aside from its breading. The sandwich was served dry (without even mayonnaise), and I had to ask for cocktail sauce. It would’ve been nice to at least get a spicy remoulade, and the absence of pickles on the sandwich is a missed opportunity for a crunchy and acidic contrast.

I’d be willing to return to Poe Bouyz House based on the quality of bread it serves on its titular sandwiches, but the rest of the experience left me wanting more. I am happy to report that Poe Bouyz House has worked out any service kinks it had when opening, but I wish its menu was as interesting or well-executed as its over-the-top exterior.