In the wake of the George Floyd protests, Oklahoma City confronts its own history with violence and moves to make changes.

While the protests in the aftermath of the in-custody killing of George Floyd at the hands of the police have died down in Oklahoma City, debate about the future of policing in the city has not.

For several days in late spring, protesters gathered in northeast Oklahoma City, at the state capitol, at the intersection of NW 23rd Street and Classen Boulevard, on the streets in surrounding areas and outside Oklahoma City police headquarters and the Oklahoma County jail.

A number of protesters were arrested, and during Mayor David Holt’s short-lived curfew in the blocks surrounding Oklahoma City police headquarters, a number of businesses were vandalized, with windows smashed and buildings covered in graffiti. But unlike many other major cities across the country, there were no riots or widespread property destruction.

With notable exceptions like Del City police Capt. Randy Harrison, who was charged, tried and convicted by an Oklahoma County jury of first-degree manslaughter in November 2013, the vast majority of police shootings here have been cleared by Oklahoma County District Attorney David Prater.

Prater has also come under scrutiny this summer after choosing to charge several protesters with acts of terrorism after the protests. Those cases have not been adjudicated.

The incidents in Minneapolis and elsewhere since COVID-19 first gripped the nation have accelerated a conversation about policing tactics in this country between citizens, activists, politicians and the police themselves.

Black Lives Matter Oklahoma City spearheaded many of the protests and demonstrations against police violence that occurred this summer. Executive Director Rev. T. Sheri Dickerson and Oklahoma City Councilman James Cooper are members of the task force. Both spoke with Oklahoma Gazette prior to the first task force meeting on Aug. 11.

Cooper, who is also a schoolteacher, has taken a methodical, research-based approach to his conversations with Oklahoma City Police Chief Wade Gourley about policing. Subsequently, a resolution vote to create the task force was made during a summer city council session after the city budget was passed. The phrase “defund the police” has become a common phrase this summer to mean finding alternatives to heavy-handed policing tactics.

“A resolution which we were able to pass unanimously on to get a study going with a consultant and a working group examining six community policing initiatives,” Cooper said. “Focusing on mental health and homelessness violence interruption programs and very, very important things that I’ve heard from people across Ward 2 and, quite frankly, from across the city that these are things we should be addressing when it comes to public safety. We’re seeing support across demographics, support for looking to see if the way we’ve done things is working and what studying research, credible peer-reviewed research, what that tells us about how to move forward in, quite frankly, multiple disciplines.”

The first prong of the initiative is training all Oklahoma City police officers in crisis intervention.

“Making sure our officers receive training to respond to incidents involving persons in crisis or experiencing mental health issues and to provide training to police dispatchers to identify calls involving people in such a state. Right now, we meet the national goal of having at least 25 percent of our OCPD patrol trained as crisis intervention team, and that’s great. And you want people who are passionate about that work being on that specific team, that crisis intervention team, but we can’t pretend that there wouldn’t be an opportunity for one of our officers to encounter someone and not realize it until they’re in the moment. And we just need to make sure we’ve given our officers all the tools they need to be successful and safe out there,” Cooper said.

“The second one was making sure that all of our officers have access to discreet mental health services, specifically due to an officer’s higher likelihood to experience PTSD, anxiety or depression. I have friends who fought in Iraq and Afghanistan, and as mentally and physically fit as they were, turns out, or in the images which come with it, they can do a number on one’s sense of self and their psyche, their synapses, so making sure that our people who put themselves in harm’s way, that we do everything we can to make sure they have the resources that they need, including access to mental health 24 hours, seven days a week. We’re already moving in this direction. I just want to keep seeing us go perfect with it.”

The third is alternative responses to mental health calls than policing.

“What would it cost to have a trained mental health professional and/or social worker provide a coordinated response to emergency calls concerning mental health crises? What’s it cost us right now, doing the approach we’ve got? What do the programs across the country and the globe with the best practices look like? What’s the cost-benefit analysis of that?” Cooper said. “We are already moving in some of this direction, partnering with state social and mental health agencies to create a program doing something similar. Again, I think the crisis is that deep, and the pandemic has only made it deeper. … You’d also have to make sure that your 911 emergency dispatchers have received that training to be able to recognize and identify when someone is in that particular mental health crisis.”

The fourth is a focus on youth outreach programs.

“Maybe we expand programs like OKCPD’s FACT youth outreach program in order to establish positive relationships between law enforcement and community youth,” Cooper said. “This was something that Councilwoman Nikki Nice really found worth investigating, and as someone who comes from a middle school background and college teaching background as well, I agree. Taking what we’re doing that works could also mean the Police Athletic League that we expand in these ways.”

The fifth is an expansion of homeless outreach initiatives.

“Which could mean additional funding for the expansion of OKCPD’s homeless outreach team. Connecting residents experiencing homelessness to case management services and housing-first programs,” Cooper said. “So that’s really key, is connecting folk to those case management services and to those housing-first programs so that we interrupt that cycle of homelessness. We keep someone from falling back into that cycle by making sure they have that case management service as well. But getting them into that housing first so they’re secure, so that they can receive those services and endure, is critical. Also, looking at, with our homeless outreach team, they’re already expanding by adding two more officers. Right now, there are only two homeless outreach team officers for all 621 square miles, so what would that look like to expand it? But moreover, what if we find through this research and study that maybe it’s social workers we send out on those calls, maybe that’s most effective.”

The final prong would be the creation of a neighborhood safety violence interruption program.

“That’s where trained staff work with residents to reduce street violence and criminal activity and they do so specifically working with residents most likely to become involved in such violence, and they work with those who are most resistant to change or chronically unresponsive to help,” Cooper said. “Examples of this exist throughout the entire United States. … This was something that Councilwoman JoBeth [Hamon] had suggested and something I definitely find interesting as someone who has studied media violence, keeping in mind that people would blame movies like Boyz n the Hood for real-life violence, they would blame gangsta rap for real-life violence, but they never bothered to actually go into those neighborhoods and find out, Hey, why is this actually happening? And how important would it be to have someone who went down the wrong path previously to be the one to help this kiddo from following in their footsteps? This is something I learned along the way, and I want to study it more.” 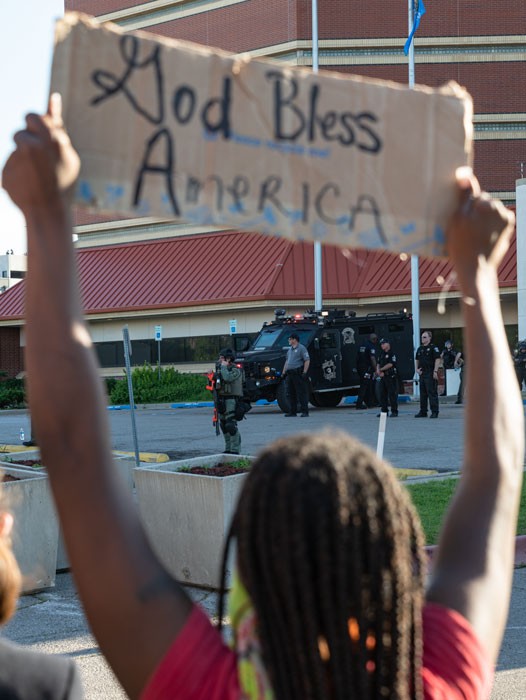 Dickerson, who has been a BLM OKC leader since its creation in 2016, said the George Floyd killing at the hands of police was a cultural tipping point that coincided with the other events of the year and she is taking a more pointed and demanding approach to law enforcement.

“I think the pandemic definitely played a role. My perspective is that, as a country, we were all in a very different state. Some of us were immobile. Since you don’t have the ability to exist in your normal circles, we were paying attention, and here in Oklahoma, the year before, the situation with Mr. Derrick Scott was eerily similar,” Dickerson said. “I was very triggered because I had seen that tape, and when I saw Mr. Floyd, I’m still heartbroken and angered and just so disappointed in the lack of humanity offered to those in melanated skin. … One thing that was different about this was that it was so deliberate and intentional, with very little remorse.”

Dickerson said these kinds of fatal interactions have become so routine that many of these deaths go unrecognized because they have become normalized.

“Until the culture and the system of oppression and racism and all of the lack of humanity, until those systems are dismantled and abolished, because I’m an abolitionist, so there’s some that just need to be literally abolished, especially if you acknowledge why the system of the institution of law enforcement was created anyway, to continue to enslave black people,” Dickerson said. “Until that culture is changed, nothing is going to change, and until they actually realize that they’re going to be held accountable and there is going to be action taken, they’ll continue to slaughter the lives of people in melanated skin and those who stand with those who understand that it’s not right, it’s not okay. Our elderly, our poor, our Latinx, our queer, our white allies and accomplices, so many indigenous and native folks. In Bricktown, they just put up a land run statue. It was just finished. What are we thinking?

“I say this very openly, and I’m tired. People are like, ‘Well, we need to keep having the conversation.’ It is not the job or the obligation or the responsibility of Black people or people of color to educate those that have been the controllers of the systems of oppression. Do the work yourself if you want to make the change, and then follow through with it.”