Jeremy Cooper treats medical marijuana cuisine as a matter of life and death. 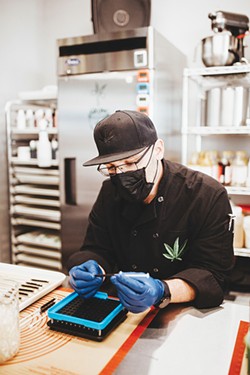 Jeremy Cooper is a man who wears many of them, but he’s most known for donning his cannabis chef’s hat.

Cooper is currently helping Fire Leaf get its medical marijuana kitchen up and running but started in the industry when he helped a friend who had fallen ill.

“I started doing this seven years ago in Seattle, Washington, when a friend of mine was dying of cancer,” he said. “I had a really nice job with a Fortune 100 company, and I left the Fortune 100 company because I saw that there were a lot of people that really needed help. I treated her with a combination of lingzhi mushrooms, reishi mushrooms, cannabis oils and a numerous amount of other things. She survived. The treatment worked very, very well. There were some side effects that basically caused internal bleeding and stuff. It tore away portions of the cervix where the tumors were and basically shed it and she was able to again live her life. Then I went, ‘Wow! What else can I do?’”

The experience redirected the course of his life, but not his core passion. Cooper had previously made a living in cooking and catering.

“I was known as The Drunken Chef,” he said. “I had done the multiple international wine festivals. I worked for Tommy Lasorda, the baseball player. I was his head chef for his wine company, I took his most high-end wines and turn them into sauces and cooked for the Make-A-Wish Foundation, the American Cancer Society. I owned a corporate event firm in Greenville, South Carolina, that specialized and nonprofit cancer events and children’s events. We ran a company for over 20 years. Still have employees and still they’re all doing their thing across the United States, and I’ve given the company to my employees.”

Cooper relocated from South Carolina to the Seattle area, where he started getting involved in the cannabis industry.

“I saw there was an amazing opportunity in cannabis, and it was growing. They had just legally passed medical not too earlier than my arrival,” Cooper said. “I was very passionate about cooking. I was a molecular gastronomist specializing in alcohol and botanical science. So it really fit very, very well.”

Cooper rubbed shoulders with others in the cannabis industry and started making a name for himself in Seattle.

“I was doing my civic duty. I actually help coordinate hospitality and emergency management services, so we provide water, first aid, snacks and we sponsor that all through our community service program called Connecting America to Cannabis, which is a nonprofit educational organization,” he said. “We went to Hempfest, which is the largest cannabis event in America, and we provide all of the snacks, services and support for senior citizens, handicapped as well as every single volunteer in the event, which is thousands and thousands of people. We have 300,000 people that attend that event every year, and I’ve been the host of that event for the past six years for the front entrance. I get up there and I’m like, ‘Welcome to Hempfest, the largest free speech event in America,’ and do all that kind of fun stuff on behalf of the industry.”

There, he became involved with a company called Magical Butter, which he used to make Rick Simpson Oil, an extraction named for a Canadian engineer who invented the tincture to combat his cancer.

"I saw there was an amazing opportunity in cannabis, and it was growing."
—Jeremy Cooper tweet this

“I’m a founding shareholder in that company, and you put your butter in there, you put your cannabis in there and you blend it up and it makes cannabis butter,” he said.

From there, he launched a cannabis-based bed and breakfast and made a cannabis soap and a shampoo for women going through chemotherapy. Cooper’s work has recently taken on a more personal mission.

“I was actually diagnosed in September and given two weeks to live,” he said. “I have stage four cancer. I have leukemia, lung cancer, tumors on the base of my spine as well as in my colon. I’ve had multiple surgeries, been through chemo, had a heart attack in November. I still run an eight-minute mile, I still work out, I still do combat training.

“RSO was probably the most important thing in the cannabis community in the early years because it’s a treatment for cancer, and to be honest with you, I didn’t really understand how much of a treatment it was until recently. I consume 3,000 milligrams a day; presently, I’m on about 800. The average person, it’s going to put them on their side, but it counteracts the aspects of the chemotherapy. It stops the burning, it stops the pain, it stops the joint inflammation, it stops me from being sick. It helps me see better so I can stay concentrated, and it counteracts some of that. With a little bit of CBD, I can actually reduce the inflammation and I can act like a normal person during the day.”

Cancer hasn’t slowed him down a bit, and he’s hard at work in Oklahoma’s new medical market. Cooper is in Oklahoma City devising new products in the show kitchen at Fire Leaf’s new Stockyards location. 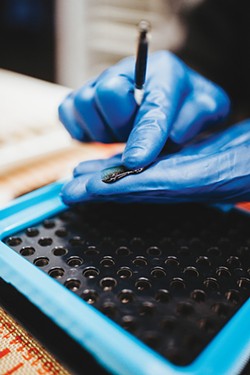 “All of our food here is custom-tuned,” he said. “So for example, our RSO can actually have a stomach stabilization system by adding mint oil to create a stomach stabilizer so that cannabis patients can do that, so we’re making a pill for that. ... We are doing vegan, vegetarian, non-GMO, protein-rich as well as vitamin-rich products. Most of our products have less than 5-6 grams of sugar in them. We will be doing tinctures with specialty pharmaceutical-grade oils which people will be able to absorb and are extremely healthy. We’ve worked very, very diligently to create medicine for the people, and that’s the most important part. Don’t get me wrong; there will be some miscellaneous sweet things that are going to be available, but those will be more artisanal.

“I’m very community-oriented individual. When I come into a community, my deal is I can bring in ringers all day, but my policy is I recruit and I farm from the community because the community deserves it first. So when I found that there was an opportunity to come here, I jumped on it. I’m very honored to be here. I think it’s an excellent opportunity to go back in time and really correct a lot of mistakes, take everything that I’ve learned and bring it back to the community.”