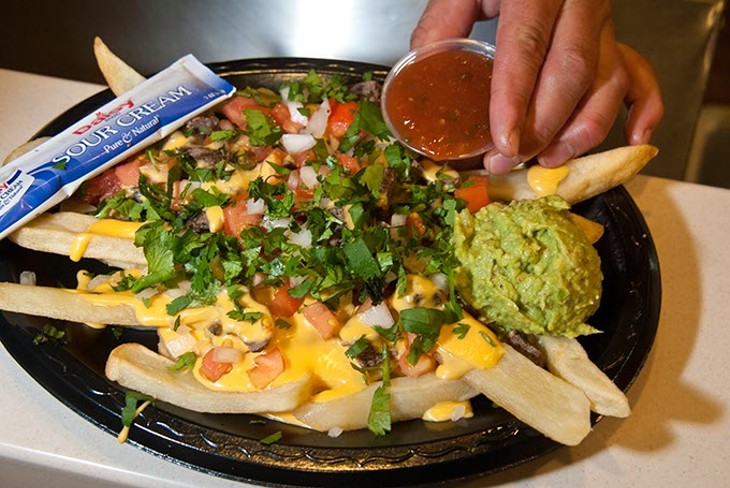 Oklahomans do not like vegetables. We’re ranked No. 44 in the nation when it comes to vegetable consumption. And the vegetable we do eat?

Potatoes, usually cut into sticks and fried. And sweet, sensitive Lucifer do they taste amazing. But this terrific tuber has so much more going for it than just pommes frites.

Submitted for your gluttonous pleasure, here are some of the best — and most creative — potato dishes I’ve found in our great city.

At Taqueria Tropicana, 1022 SW 29th St., the potatoes are mashed, seasoned and fried ... into puffy little taco shells. Yes, fried mashed potato tacos. You might never have seen those words in that order before, but they make so much sense. Then those potato shells are filled with sour cream and lettuce and avocado and tomato.

Next is the boxty. If you go to Sean Cummings’ Irish Pub, 7523 N. May Ave., you can get something like a potato pancake — more like a crêpe — either wrapped around onions, mushrooms and beef or delicate dill salmon.

But if that’s not enough potatoey goodness for you, then you’ll want the colcannon. Creamy mashed potatoes are mixed with cabbage, leeks and bacon.

I can see you drooling. Your overactive salivary glands have the right idea.

Back to mashing and frying, I think what makes the Classen potatoes at Classen Grill, 5124 N. Classen Blvd., so good is an utter disregard for health. In Oklahoma, nothing tastes better than the stuff you’re not supposed to have.

Like a pile of mashed carbs rolled in bread crumbs and deep-fried until they’re golden brown. Crunchy outside, smooth and tasty inside.

At Revolve Pizza Kitchen, 5500 W. Memorial Road, co-owner Chris Moranchel said potatoes are the key behind one of their biggest sellers, The Loaded Spud Pizza.

This pizza replaces marinara sauce with a cheddar-scallion sauce and then piles on bacon, mozzarella and potatoes before going in the oven. When it emerges, it’s garnished with more cheddar cheese and fresh chives.

While that pizza’s not terribly Italian, if you’re looking for potatoes with a foreign flair, you should head to Inca Trail Peruvian Restaurant, 3939 N. College Ave. in Bethany, for the Papa a la Huancaína. This dish takes boiled and thinly sliced potatoes and tops them with aji Amarillo (a spicy yellow sauce that makes everything better), hard-boiled eggs, red peppers and Kalamata olives.

OK, I know I said we were getting away from french fries, but let’s not pretend they aren’t great. And they’re even better when you put things on top of the fries. Like the carne asada nacho fries at Taco Pronto, 7624 W. Reno Ave.

“The carne asadafries combine everything you love about nachos and ditch the chips for french fries,” said devoted customer Marisa Mohi. “Topped with queso, carne asada, guacamole and sour cream, they are the best things to eat while you wait on your friends to shop around.”

Now, if we could just find a way to make nachos out of spinach, Oklahomans might survive until the next survey about how we’re not eating enough vegetables.

Tubers, pronto! With the first crackles of fall upon us, our craving for potatoes is sometimes overwhelming. Fear not, spud lovers, as quirky local choices abound.