Paula Poundstone gets serious about her comedy in the Trump era. 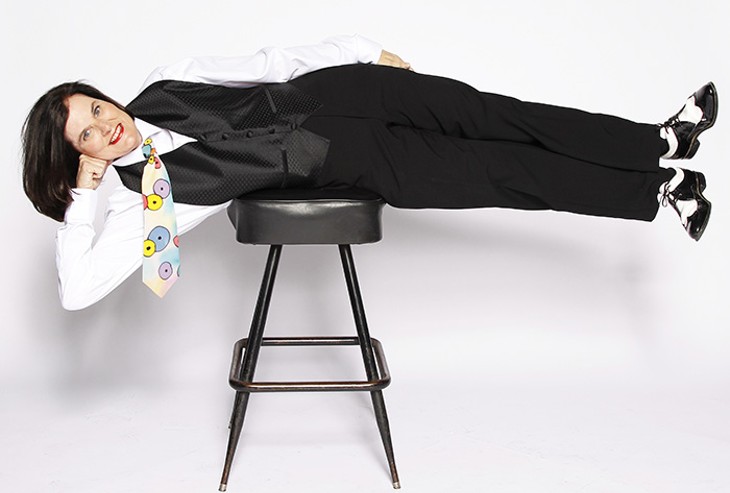 One of the many things altered by the contentious political atmosphere that helped put Donald Trump in the White House is Paula Poundstone’s standup act. Poundstone, whose comedy career turns 40 this year, said some of her audience interactions have been more contentious in the past few years after “the Russians have had their way with us” with targeted social media campaigns designed to spread misinformation and division.

“I believe that it’s been far more effective than it’s being given credit for because there was a time with my audience — which is, sure, largely Democrats, but not entirely, and certainly not by design — when people just came out and they laughed, and if they didn’t agree with me on something, they just waited for the next thing,” Poundstone said. “There was no rancor. Every now and then, I’d get a letter from somebody who told me that they were a Republican and they were so upset because I said, ‘Blah, blah, blah,’ but in 37 years, that might have happened twice. Then, after his election, I had the occasional people who would stand up and walk out. It didn’t happen frequently, but it happens occasionally, and I don’t remember it happening in the 37 years before. The other thing is they didn’t just leave. They had to make a show of the fact that they were leaving. It was very strange. I don’t know. I just feel like something has shifted.”

Poundstone, a frequent guest on the National Public Radio quiz show Wait Wait ... Don’t Tell Me! and host of the podcast Nobody Listens to Paula Poundstone, performs 8 p.m. Saturday at Oklahoma City Community College’s Visual and Performing Arts Center Theater, 7777 S. May Ave. The standup, known for combining observational humor with quick-witted crowd work, said even occasional angry outbursts from audience members are worth noting because her audience has typically been supportive and considerate.

“My manager used to say to me — and this was long before Trump — she would say to me when I’d be booked to work, like, Oklahoma or Kansas, she’d go, ‘Oh, I don’t know. That’s a very red state.’ I’d go, ‘It doesn’t matter,’” Poundstone said. “Partly because I talk to the audience the way I do onstage, but also partly because I’ve been doing these meet-and-greets for years; I probably know a lot about the people that come to see me, and by the way, it’s good news. It’s refreshing, the people that come to see me. They’re nice people. At the end of the night, when I’m totally wrung out like a washcloth, I say to the people that run the theater, I go, ‘I have the best audiences, don’t I?’ And maybe they’re saying it appease to me, but they do generally say, ‘Yes.’”

Her apolitical bit about eating an entire box of Pop-Tarts from her 1980 HBO special Cats, Cops and Stuff made Vulture’s list of “The 100 Jokes That Shaped Modern Comedy,” and Poundstone said her material is still more personal than political.

“I don’t do tons and tons of political material onstage,” she said. “My act is largely autobiographical. I talk about what I’m reading, what I’m paying attention to. When I was raising a house full of kids and animals, I talked a lot about that. When I first started, I talked about bussing tables and riding the [subway] in Boston, and now the truth is I do spend a lot of energy paying attention to what’s going on in the world. And so it comes up more than, perhaps, it used to. When I first got really interested in politics, it was because I was riveted by the Iran Contra hearings years ago. I started paying attention then, to greater or lesser degrees. Sometimes, when people asked me to describe my act years ago, I would say I talk about the news or politics in direct relation to how dramatic my home life is. If all hell’s breaking loose with my kids, then guess what; I didn’t watch the NewsHour that night.”

She added, however, that she finds herself increasingly concerned with the stories on PBS NewsHour and MSNBC, which she said is making her “mentally ill.” The unreality of the nightly news can be reminiscent of something from an old science fiction show.

“The real estate in my head is really taken up a lot lately,” she said. “Part of it is social media, for sure, which I do waste some time on, and part of it, I think, is just the legitimate cause for alarm. We have a president who lies to us every goddamn day, and that should be more concerning than it is. The NewsHour won’t even use the word ‘lie.’ They’ll say ‘falsehoods.’ There’s a guy from a Canadian newspaper [Toronto Star’s Daniel Dale] that’s keeping track of how many lies Trump has told, and they had him on one time. Judy Woodruff said to him, ‘Why do you use the word “lie?”’ It was like a Lost in Space episode where Will Robinson met a princess from another planet and he asked her if she wanted to play, and she said, ‘What is “play,” Will Robinson?’”

While she’s upset by much of what she sees in the world around her, Poundstone said she is still mainly making observations about politics onstage for the same reason she used to read from the instructions on the back of a box of Pop-Tarts — she finds humor in it.

“It’s definitely changed my job in some ways because it’s made me more reflective about that sort of thing,” she said. “But I think in the end, I come up with the same answer, which is, ‘I’m just a little joke-teller.’”

Cracking wise about political realities does little to change them, Poundstone said, but as a professional comedian, she said she doesn’t really think she should be the one to initiate change anyway.

“We all think we’re George Carlin or Will Rogers,” she said. “We all think that we’re somehow changing the landscape by speaking truth to power in our funny little tweets, and the truth is we’re just entertaining ourselves while all hell breaks loose. … It’s not my intention, certainly when I’m on stage, to change anyone’s mind. I’m not the person. First of all, heaven forbid I be the person people decide things based on. How fucked up would that be?”