The Lunar Laugh debuts new single “Waiting on a Sign” to gear up for a new album. 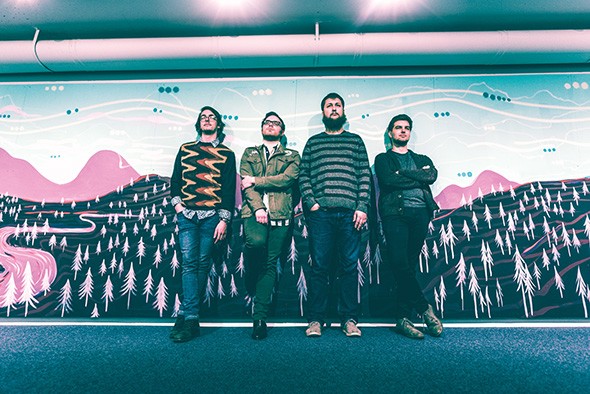 Three-part harmonies are a trademark of Oklahoma City-based band The Lunar Laugh, which is indicative of the way lead singer Jared Lekites and guitarists Connor Anderson and Campbell Young work as a unit.

Lekites and Anderson first released Apollo as a duo in 2015 but have expanded to include Young and drummer Jimmy Jackson as core members with bassist John Stendal and keyboardist Peter Collins also lending their talents to live performances and in the studio on 2017’s Mama’s Boy. A new LP is scheduled for early summer 2019.

“We all respect each other’s opinions, and it’s all a collaboration because no one is afraid to make a bold choice on a new song,” Anderson said of working together.

The Lunar Laugh is making one of those bold decisions with the release of a new single and video for “Waiting for a Sign,” which will be released March 29.

“It’s very different from everything else we’ve done as a band in terms of approach. The style, I guess you could say, is modern,” Lekites said. “The style is more repetitive than what I usually write, so I thought of trying something that would fit the production style that you’d be familiar with on the radio these days. It’s like our Ariana Grande phase.”

“Waiting for a Sign” swells with a shimmering keyboard progression before tight three-part harmonies lead into a chorus with angular guitar parts that emphasize the power in The Lunar Laugh’s power pop sound.

Although Lekites said he didn’t write the song with contemporary radio play in mind, that is where “Waiting for a Sign” ended up, and it isn’t exactly indicative of the rest of the new album.

“We still love doing power pop, and the next album has the most power pop thing that we’ve done, but then it also has things like ‘Waiting for a Sign,’ which has weird melodies and reprises,” Lekites said. “It’s going to be more thematic than the other stuff we’ve done.”

The Lunar Laugh’s sweeping guitars work in conjunction with its harmonies and collaborative songwriting inside the large spectrum that is power pop.

“Power pop is weird because it’s broad but also very narrow at the same time,” Lekites said. “You know what isn’t power pop, but you definitely know what is power pop. For me, it’s more about the artists than the actual style of music. Todd Rundgren is one of the main power pop people I think of, and every one of his albums is insanely different.”

Letkites is the only one of the four core members of The Lunar Laugh that didn’t get music education at Academy of Contemporary Music at the University of Central Oklahoma (ACM@UCO). He innately knew he wanted to make music, and his earliest memory was watching Garth Brooks perform.

What The Lunar Laugh lacks are twang and songs about thunder, but the group wants to emulate Brooks’ showmanship.

“Maybe one day we’ll all get one of those cool wraparound microphones,” Lekites joked.

The Lunar Laugh is a reference Lekites heard on The Zodiac’s Cosmic Sounds, a 1967 Elektra Records release that features early use of a Moog synthesizer.

“There is a lot of poetry and weird … what a ’60s type of synthesizer music would be,” Lekites said. “It’s done with tapes and rooms full of computers. There is a guy reading poetry about astrology, and one of the phrases is ’laughing the lunar laugh’ that stuck with me.”

Lekites began work on a solo album in 2014 and credited Oklahoma City musician and co-owner of The Jones Assembly Graham Colton with pushing him to start a band. Anderson joined first, and then Young came aboard while the group was working on Mama’s Boy. Jackson joined the band in 2017.

“We had a revolving door of drummers,” Campbell said, and without skipping a beat, Jackson added, “Similar to Spinal Tap.”

Jackson has stuck around in the band for over two years, and he now serves as its manager.

"We’re not dating Pete Davidson yet."
—Campbell Young tweet this

“I’ve played with a lot of different bands, and what immediately drew me to this band from the first rehearsal is that it is serious, but not in any difficult sort of way,” Jackson said. “I’ve been in other bands where I’ve asked if they want me to do A or B, and they just say, ‘Whatever,’ and that doesn’t help me grow. If I look at any of these guys, they’ll tell me what sounds best. It’s about having vision.”

The Lunar Laugh does a lot of its recording at the coincidentally named Lunar Manor, a studio co-owned by Colton.

“I’ve known the guys awhile,” Colton said. “You can really hear their growth as songwriters. I’m honored to be a small part of it.”

Lekites said he doesn’t consider himself the main songwriter of the group because everyone contributes something and the new album also features songs written by Young and Anderson, but he has a knack for the medium.

“There are quite a few songs I had fragment of an idea — a few chords that sounded cool — and I’d work on them with Jared,” Young said. “It’s crazy to watch Jared work and write a song. I’d show him the chords, and he’d have his notepad and he’d be like, ‘OK, I have two verses and a chorus,’ and I’d be like, ‘How’d you do that? It’s been like 18 seconds.’”

The Lunar Laugh will play a semi-acoustic set Friday at 51st Street Speakeasy with New Tribe and Sativa Prophets since Jackson will be on his honeymoon. The band also performs at Norman Music Festival 10 p.m. April 25 at Bison Witches, 211 E. Main St., in Norman.

The Lunar Laugh with New Tribe and Sativa Prophets