Molly Ringwald speaks at a Junior League of Oklahoma City fundraiser, and her films are part of an ’80s celebration at Tower Theatre. 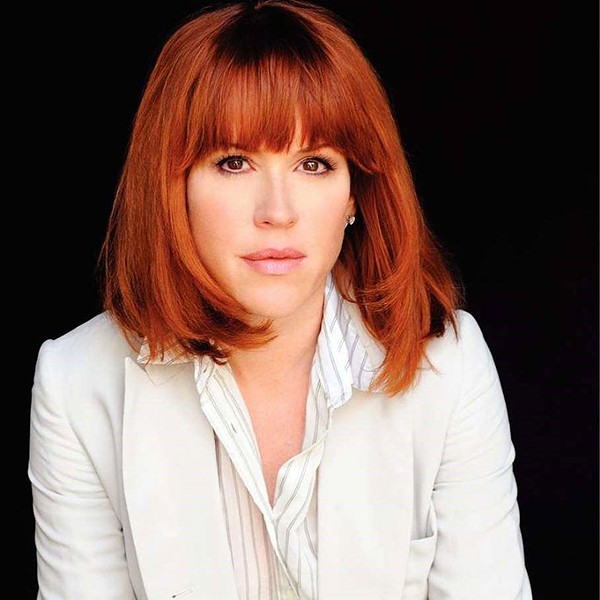 From 1980s teen star to on-screen parent of another iconic teen, Molly Ringwald has had an intriguing career as an actress, singer and writer. Now, she’s coming to Oklahoma City as part of an entire 1980s-themed weekend to be Junior League of Oklahoma City’s Speaker in the City for 2019. The Speaker in the City event is the second-largest fundraiser for Junior League behind the organization’s Mistletoe Market.

Ringwald had her first major role as a preteen in the TV series The Facts of Life in 1979-1980. She made her film debut in Paul Mazursky’s 1982 adaptation of The Tempest, earning a Golden Globe nomination, but it was her starring roles in three John Hughes films that largely cemented her position as America’s sweetheart. From 1984 to 1986, Ringwald starred in Sixteen Candles, The Breakfast Club and Pretty in Pink. As Pretty in Pink headed to theaters, Ringwald appeared on the cover of Time with an article discussing her career as the most visible of the 1980s “Brat Pack” of young actors.

In recent years, she has appeared in two prominent mom roles: Anne Juergens on ABC Family’s The Secret Life of the American Teenager from 2008 to 2013 and Mary Andrews, mother to Archie Andrews, on CW’s Riverdale.

Sarah Frank, one of Junior League’s organizers for the event, said despite Ringwald’s 1980s origins, she appeals to a wide demographic.

“I grew up with her and her movies, but there are younger women in our organization … who know her from American Teenager,” Frank said.

Ringwald speaks 2 p.m. Sunday, March 24 at Farmers Public Market, 311 S. Klein Ave. Doors open at 1 p.m. Tickets for the event are $50. VIP tickets for $150 will also include two drink tickets during the regularly scheduled event, VIP seating, a swag bag including Ringwald’s book When It Happens to You and access to the VIP reception featuring a book signing by Ringwald.

“She’s going to talk about her experience of being that iconic child star and then how she transitioned into a stronger adult female actor,” Frank said. “She’s the author of two books, and she’s also put out a jazz album. So … we’re going to touch on those subjects.”

In April 2018, Ringwald wrote an article for The New Yorker looking at her most well-known films after the #MeToo movement.

“It’s certainly something that has to be talked about, so we’re going to touch on that,” Frank said. “She certainly has a lot to say about becoming the woman that she is today.”

Ringwald pointed out problematic elements in the films in the article but also held up elements as being progressive for their time.

“That two of Hughes’s films had female protagonists in the lead roles and examined these young women’s feelings about the fairly ordinary things that were happening to them, while also managing to have instant cred that translated into success at the box office, was an anomaly that has never really been replicated,” Ringwald wrote.

In Sixteen Candles, Ringwald starred as Samantha “Sam” Baker, a suburban teen dealing with her sister’s upcoming wedding, her feelings about her crush and her family overlooking her 16th birthday. For The Breakfast Club, Ringwald played upper-class Claire Standish as part of the ensemble cast of teens discussing their feelings and problems over a Saturday detention. And in Pretty in Pink, Ringwald played Andie Walsh, a creative teen from the wrong side of the tracks. When rich kid Blane (Andrew McCarthy) falls for her, it causes trouble in both of their social circles. Pretty in Pink hit No. 1 at the box office in March 1986.

“One of the goals of Speaker is to bring in somebody that other groups might not bring into the community,” Frank said.

The process of bringing Ringwald to town started in January 2018 when a Junior League committee began looking at potential guests.

“We wanted somebody that could run the range of interests,” Frank said.

Ringwald’s appearance is part of an entire 1980s weekend being held in conjunction with Tower Theatre, 425 NW 23rd St.

The Totally Tower 80s Weekend features a dance party and a series of 1980s films. For those specifically interested in the “Molly trilogy” of John Hughes films, Tower will show Sixteen Candles, The Breakfast Club and Pretty in Pink starting 10 a.m. Saturday.

Chad Whitehead, operating partner of Tower Theatre, said working with Junior League to create a tie-in event with Ringwald’s appearance for Speaker in the City got everyone motivated.

“We thought, and they thought, it would be really fun since Molly Ringwald was coming to town to do a day of a lot of her great movies,” Whitehead said.

But the idea grew from there.

A rare open Friday on the calendar led to programming of the 1980s dance party this Friday. Then, the Tower Theatre team saw the chance to go even bigger and create an entire film festival-like experience.

“We like being creative, and we just saw an opportunity here,” Whitehead said. “This would be a great time to do a big focus like that.”

In addition to the “Molly trilogy,” Tower Theatre will show Spike Lee’s School Daze, the original version of Footloose, The Princess Bride, Dirty Dancing, Ferris Bueller’s Day Off and Say Anything.

School Daze features clashes between Greek organizations at a historically black university and drew on Lee’s own experiences at Morehouse College. The March 20 showing, as it turns out, is significant.

“We’ve been wanting to do something for Spike Lee’s birthday,” Whitehead said. (Spike Lee was born March 20, 1957.) “And we’ve been not been able to get the rights to some of his. And then that just happened to be one [we could get]. It’s in the ’80s; it gives us a way to include that in the whole rollout.”

From there, the team began to fill out the rest of the calendar.

“It really became, ‘What can we do, and what can’t we do?’” Whitehead said. “And that was kind of painful because there’s a lot of great things. You have to cut it off and be realistic about how many movies you can show in one weekend.”

Looking back at that time, Frank said Ringwald’s characters helped show teenage girls that they could have agency and make their own choices.

“She was what everybody wanted to be. She’s going to forge her path,” Frank said. “The roles that she played and the fact that she played them was a big deal. And that’s why it stands out so much. … She held her own in a time when young women weren’t or couldn’t or didn’t for a variety of reasons. That is why she stands apart from so many other movies and roles that were happening at the time.”