Prescription painkiller epidemic on the rise in Oklahoma 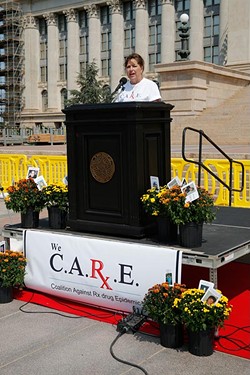 Overdose deaths are on the rise in Oklahoma, and the drugs to blame aren’t meth, heroin or cocaine.

They’re prescription painkillers, medications created to relieve pain, prescribed by doctors and located in medicine cabinets in every home across the state.

Hydrocodone, oxycodone (more commonly known as Vicodin and OxyContin) and alprazolam (Xanax) are the most common prescription drugs involved in overdose deaths, according to figures provided by three state agencies.

Each is highly addictive, even when properly prescribed and used. Often, patients can develop tolerances, which can result in taking dangerously high doses or taking them in unsafe combinations — or both — with deadly consequences.

“I think everyone sees images in their minds of a toddler sticking something in their mouth, but that’s not what we are doing anymore,” said Banner, who also serves as the medical director of the Oklahoma Poison and Drug Information Center. “We see a lot of that, but we are increasingly seeing teenagers and adults involved in prescription drug abuse and drug overdose.”

Oklahoma State Department of Health data shows that death from prescription drugs is now the leading cause of accidental deaths statewide.

Those numbers are indeed troubling, but equally disturbing is the rise of addiction and abuse. Oklahoma leads the nation in non-medical use of painkillers, with more than 8 percent of the population abusing or misusing painkillers, according to report figures from the 2010 National Survey on Drug Use and Health.

State health and law enforcement leaders desire solutions and are pushing for public awareness and education about a growing problem that impacts rural, urban and affluent areas alike.

Those leaders took their message, mixed with sorrowful firsthand testimonies of addiction, to the state capitol for the Coalition Against Rx Drug Epidemic’s rally Aug. 31, in observance of International Overdose Awareness Day.

While there, leaders and community members echoed the conviction that solutions require action by lawmakers, health officials, law enforcement and the public.

“It is important to reinforce that it is not just our government that will make the difference,” said Steve Buck, deputy commissioner of the Oklahoma Department of Mental Health and Substance Abuse Services (ODMHSAS). “It is up to us as a community, for this truly is a community conversation that must be heard.”

Under the direction of ODMHSAS, fellow state agencies and community organizations partnered to build the Oklahoma Prevention Leadership Collaborative. The work group forged a statewide strategy to tackle non-medical use of prescription drugs.

Its website, takeasprescribed.org, sprung from the plan and informs the public and providers about abuse, treatment options and available services. Buck called the site a portal with the ability to influence change.

Banner applauds recent efforts by state lawmakers to put naloxone — a drug that reverses the effects of an opioid overdose — into the hands of citizens and law enforcement officers.

Two years ago, legislation allowed for the drug to be utilized in rescue situations by law enforcement. Physicians received a green light to prescribe naloxone, but in January, the requirement for a prescription was dropped and the drug can now be purchased in pharmacies across Oklahoma. 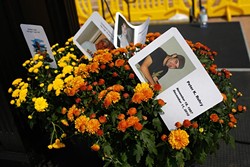 Banner said that pharmaceuticals with lower abuse potential are being developed; however, once they are approved, they likely will be more expensive.

Weaver testified before a legislative hearing that between 2001 and 2010, there was a 137 percent increase in overdose deaths.

He refers to prescription drug abuse as the state’s “silent cancer.”

“It is affecting more lives in Oklahoma than you could ever imagine,” he said.

Weaver, who oversees one of the state agencies that partnered in creating the state plan, believes it will take prevention, intervention and enforcement action to stem the growing problem. He calls the approach PIE for short.

His call for prevention starts in elementary classrooms by discussing dangers with children.

“What we have to do in Oklahoma — and I believe this strongly — is that we have to get back to teaching kids and helping kids know this is wrong,” he said. “We don’t do enough. We wait until it’s too late. We wait until they are incarcerated and we try to figure out how we are going to salvage them.”

Those who are abusing prescription drugs and are addicted to opioid pain relievers are encouraged to seek treatment.

It is a treatable illness, Buck said.

“We know that when prevention is delivered responsibly, people’s norms change and it makes a difference,” he said. “We know there is recovery for those with access to treatment. Our obligation is to make sure that access is opened to all who need it.”

Like the Oklahoma Prevention Leadership Committee and Coalition Against Rx Drug Epidemic, other entities and organizations need to come together in this fight, Buck contended.

“Until we take the conversation of how we are going to beat this to our communities of faith, to our advocacy organizations, to our employers, to our corrections agencies … those other mechanics are just mechanics,” he said of legislative action, prevention measures and treatment options. “It is going to take hard community conversations in those various arenas for us to truly bend this curve.”

Print headline: All aboard?, Leaders say everyone must be involved to change deadly patterns of prescription drug abuse and deaths.

Oklahoma ranked No. 6 in the nation for unintentional poisoning deaths in 2013, according to the Oklahoma State Department of Health.

Keep medications in a safe place.

Do not drink alcohol while taking medication.